I saw this on Twitter yesterday and it’s been the only thing I’ve been able to think about ever since. Not the question exactly, but just how easy it would be to be transported back to 1918. This isn’t even a brag for me, this is a brag for all of us. 100 years ago if you wanted a picture of yourself you had to sit still for an hour and a half in between shifts at the heavy box factory. Television was still 40 years out. Talking in movies wasn’t a thing yet. I’m pretty sure they were still robbing whole trains on horseback in 1918.

I’m sure this question was asked in an attempt to paint 1918 as a tougher time of manual labor that the average millennial simply wouldn’t be able to handle, when men were men, shit like that. Well yeah, I wouldn’t be high above the ground eating out of a metal lunch pail constructing the Empire State Building. Mostly because I’d fall immediately and plummet to my death, but also mostly because I’d be too busy being the greatest baseball player alive.

Anyone reading this should have the same answer. Or football, or basketball, I don’t know if refrigeration systems had been invented yet so I can’t comment on whether or not indoor hockey was a thing yet, but if it was then that, too. Football and basketball feel like the easiest things to be transported back and dominate. If you can throw a forward pass more than 0 yards you’re automatically the best football prospect in 1918. You draw up one play action and they’re gonna put you on trial in Salem for being a witch. As for basketball, look at how Bob Cousy was breaking ankles 50 years after 1918.

You dribble with your left hand and shoot north of 30% in 1918 and the next thing you know you’re the logo for the NBA. Jerry West is furious you got this time machine and all he got was the position of GM of the Clippers.

But while dominating these two sports would be easy, let’s not pretend the MLB would be difficult. It might take a few games to get back into the groove of playing baseball, but lucky for you they play 6 games a day. You wake up one day in 1918, confused, scared, alone. The next day you’re the starting pitcher for the Philadelphia Athletics while also hitting in the 3-hole. The best player in 1918 was a fat orphan with syphilis. I’m just fat and don’t have syphilis, despite what the message boards have been saying. Big time advantages for me or whoever else wakes up in this episode of the Twilight Zone. 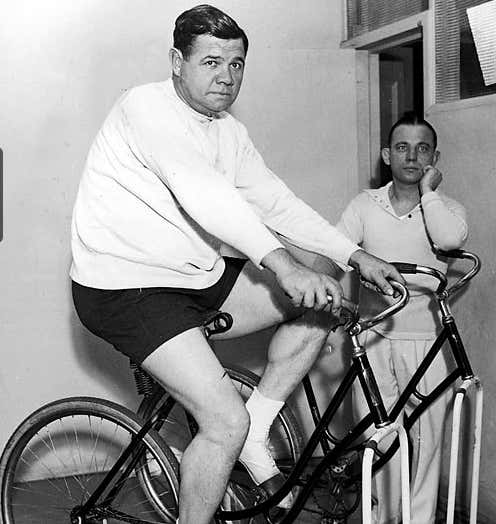 I’m going to bed tonight praying that I wake up in 1918, so I can start my career as the original Bo Jackson and also start smoking cigarettes. Everyone knows you can’t be alive in 1918 and not smoke cigarettes. That’s the most sure fire way to get outed as a time traveler and get sent back to 2018.