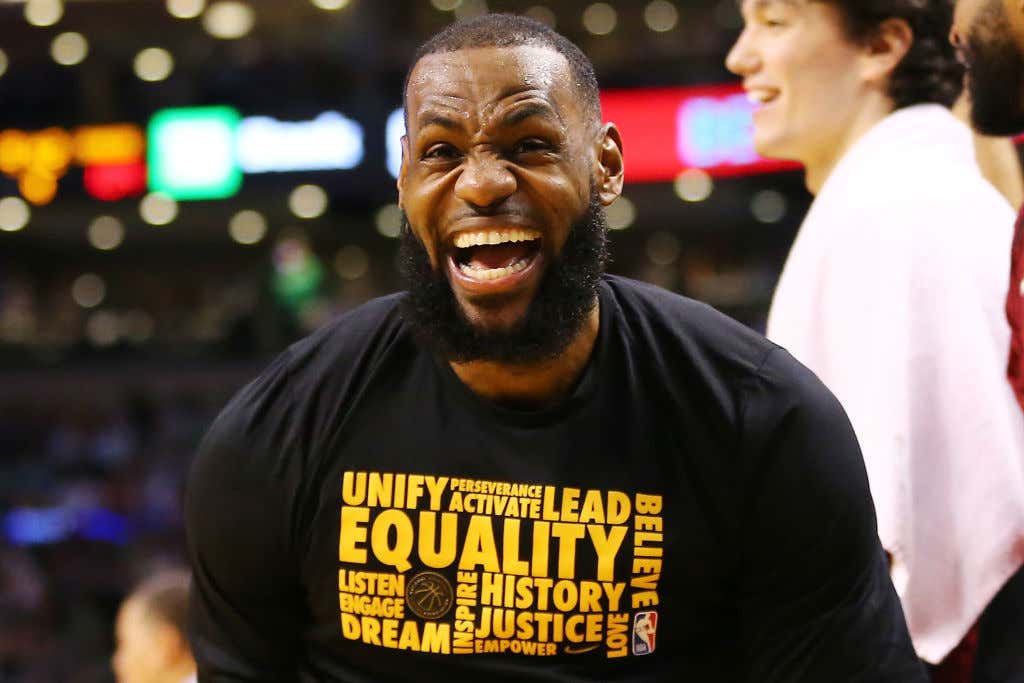 Well, that sucked. Once again, Lebron James came into the TD Garden and shook his dick over everyone’s faces. Somehow, a team filled with players who hadn’t even played a game together yet, walked into the Garden and not only punched the Celtics in the face, but shit down their throat. I mean what else would you call this? 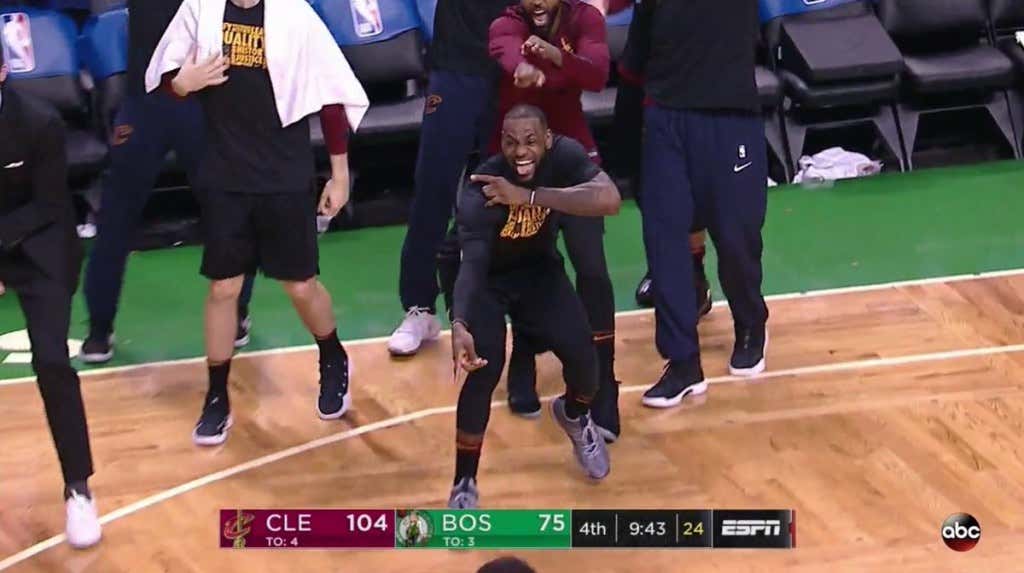 And to be honest, this isn’t new. This sort of thing has happened quite a few times since June 7, 2012, and we all know what day/game that was.

The Celtics are limping into the All Star break, and in what was a big week for them in terms of seeing how they matched up with some of the other good teams in the East, the results were horrific. Blown out by TOR, a prayer win against WSH, blown out against IND at home, and now the worst one, blown out by Lebron at home on Paul Pierce Day. The Celtics have been down by 20+ in 3 of their last 4 games, something we have not seen from them all year. After the TOR loss I was like many of you, saying OK it’s just one game no big deal. Their effort looked a million times better against the Wizards so there was no need to panic. Then the last two games happened and I’m sorry, but you can’t just sum it up to being “one of those games” when it happens three times in a week. This team is playing their worst basketball of the entire season, and there’s nothing wrong with calling that out.

Yes, they’re still 40-18 which is about a billion times better than any of us could have hoped for after opening night. No, a game in February does not dictate what will happen with this team come the Spring. But with the talent and the coaching on this team, this sort of effort is inexcusable. It should piss you off that even with Kevin Love out and all new players this team STILL gets blown out by Lebron.

With that, let’s get started

– Did most of this come in a blowout? Yup. Do I care? Sure don’t. Terry was really the only Celtic who looked like he gave a damn and finished with 21/9/5 to  lead all Celtics scorers

– Morris wasn’t really the Lebron stopper he was advertised as being when the Celtics first traded for him, but at least his offense showed up on a night where nobody else really did

– I want to be consistent. I’m putting Kyrie in this section because despite the struggles, he was efficient with 18/5 on 50% shooting and just 2 TOs. He still had his issues, but he did do his share of cooking

– That’s it. Those were the only good parts about the game yesterday. I know this section feels a little short, so go ahead and check the blog about the Pierce ceremony and then come back. I’ll wait.

– OK welcome back. With so many things to choose from, let’s start with the offense. Quick question, does anyone know where it went after the first 12 minutes? The Celtics started great, 32 points with 48/44% splits. They were moving the ball, with 8 assists on 12 baskets, and things looked a million times better.

And listen, their struggles are not because Danny Ainge didn’t trade for Tyreke Evans. This was a situation where the Celtics best players simply are playing like dogshit, and part of that in my opinion has to do with strategy.

Here is the shot chart from that great first quarter 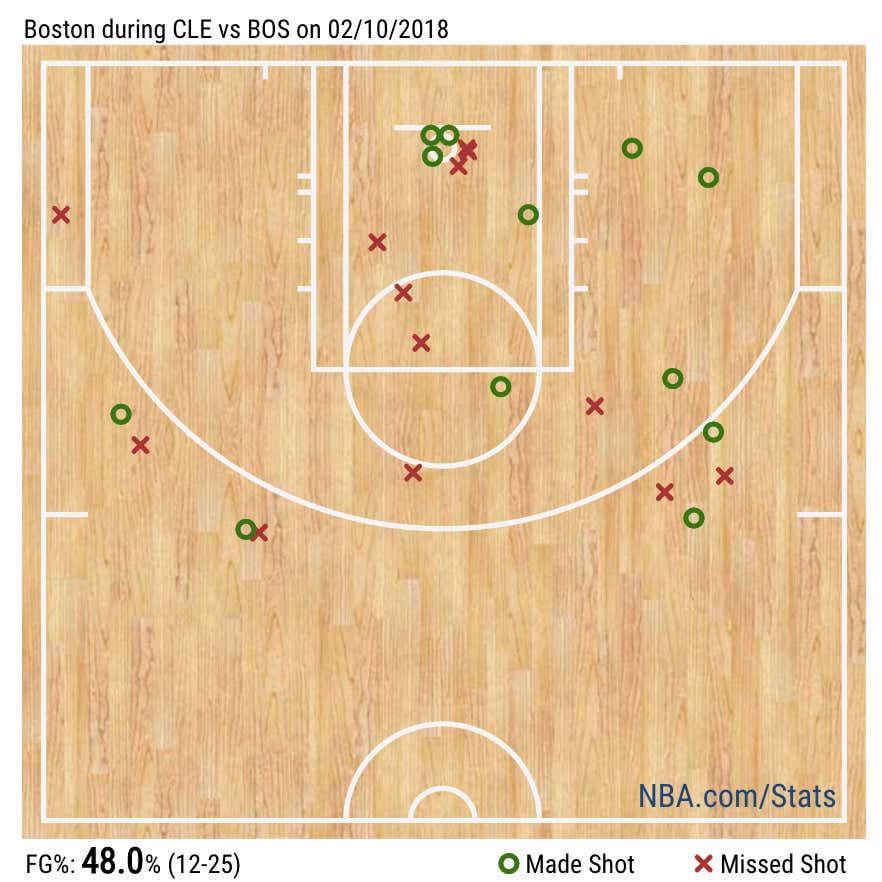 as you can see, a good balance of inside/outside offense. Well, here’s how it looked the rest of the night 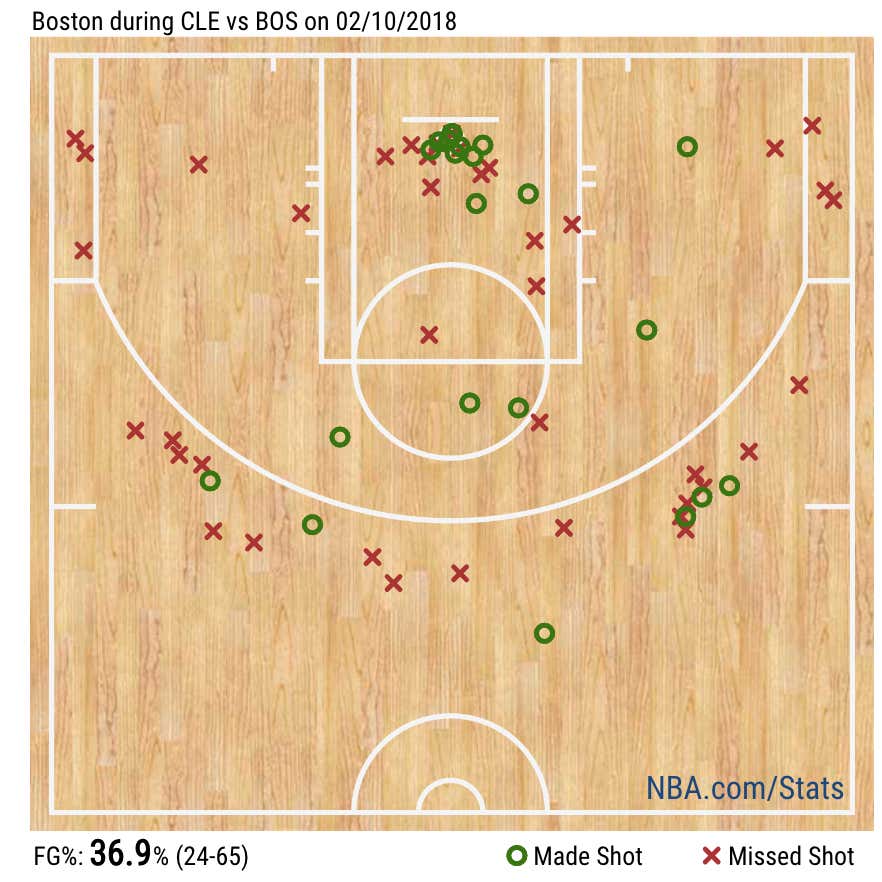 The Celtics took 89 shots in this game, and 38 of them were from behind the arc. They were 4-17 at the break, and one would think they would adjust their offensive strategy to focus on scoring in easier ways. Where was the Kyrie/Al Pick & Roll/Pop? Where was getting Jaylen in the post and letting him use his size to attack the rim? Where was Kyrie getting into the paint? We just heard Brad talk about how for this team to get back on track they need to get back to attacking the paint, well, 38 3PA does not feel like you were attacking the paint.

– In order for the Celtics to not just beat CLE, but to even be able to compete with CLE whether it’s this year or next, they need Jayson Tatum and Jaylen to be positives on the offensive end. Combined they went 6-20 in this game for 14 points. I don’t really care that this was a new CLE team with supposed better defenders, they still aren’t lock down guys. I expect those two to be able to have success against this team because we’ve already seen it.

Jaylen especially. It’s no surprise that he struggled on a night when 5 of his 9 FGA came from behind the arc (he missed them all). We see time and time again that when Jaylen attacks and converts at the rim early, everything else opens up for him. Well it was the exact opposite approach in this game and the results speak for themselves.

– The largest lead the Celtics had in this game was 4 points, and that came with 1 minute remaining in the first quarter.

– I want to focus more on that 2nd quarter. You would think that the classic 2nd quarter collapse was due to the bench sucking and is why Ainge should have done more at the deadline. But that’s just not true. Tatum, Jaylen, and Kyrie all played at least 7 minutes in the quarter and the bench guys who did play went 3-6.

The issue was lazy effort by the starting guys. Al Horford had 3 horrific turnovers all within the last minute and it looked just like the IND game. Turning the ball over on dribble handoffs? Straight throwing it out of bounds with no pressure? This is where my frustration with how this team has been playing comes from. It’s just lazy basketball, and that’s inexcusable.

– Facts are facts, Al Horford really struggles against Tristan Thompson. This wasn’t a percentages issue, Horford had 9/6/6 on 50% shooting, it’s more of a usage issue. Whenever he plays against Thompson he goes into their weird place. He’s not as active, he doesn’t try as much around the basket, and you can forget about keeping him off the offensive glass. This is why a potential series is going to be a toss up even with Hayward in the lineup, because until proven otherwise Tristan Thompson not only dominates Al, but he dominates the Celtics.

– The Celtics are now 6-8 since London and have the 27th ranked offense over that timeframe. Kyrie missed just 3 of those games, nobody else that is a good offensive player has been out. On the season, the Celtics now have the 21st ranked offense.

– I have to ask, where are the Brad adjustements?

– As I’m sure you’ve heard, this game was the most points the Celtics have given up all season. Which is why the majority of this section is going to be devoted to the Celtics defense

I mean what the hell is this 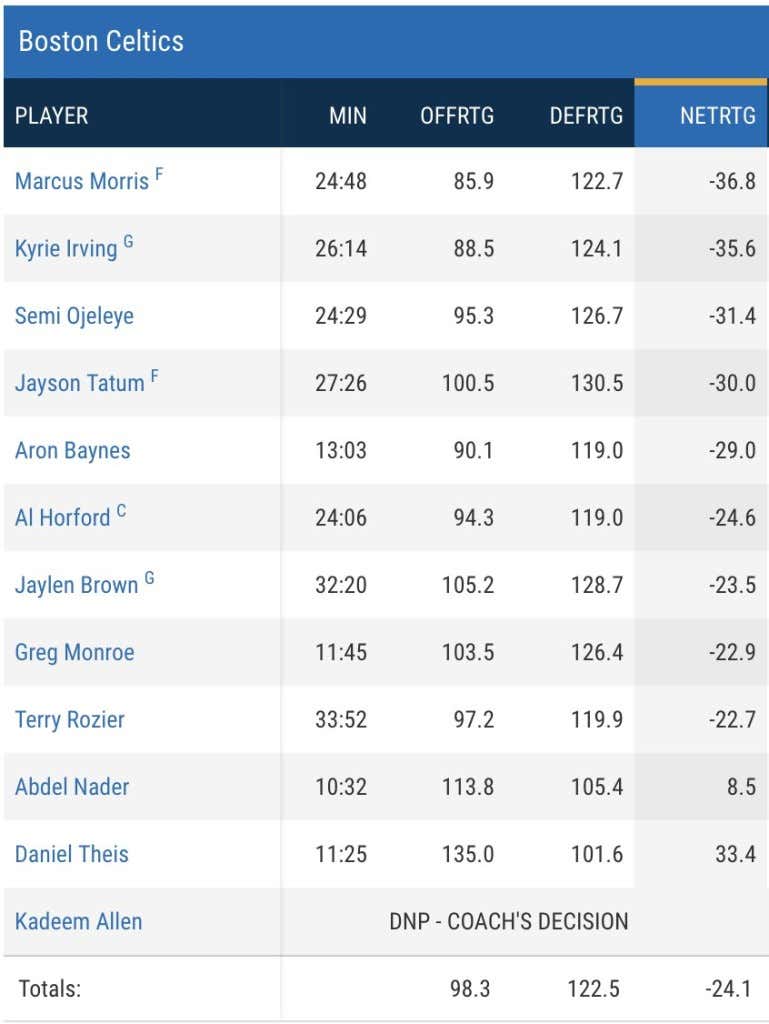 For the game, the Cavs finished with 53/53% splits, made 16 threes and turned it over 11 times. In order words, they were playing in an empty gym because there was no sign of Celtics defense. How did they do at stopping the new guys? Well, Hill, Clarkson, and Hood all ended up in double figures so I’d say not great. Remember, this was all without Kevin Love in the lineup. The Cavs will only become harder to guard as time goes on, and if you look at this defense over the last week, we’re looking at a 2017 ECF situation in my opinion. You have to defend. Period.

– To me, the defensive issues happen from the top down. When you have weak perimeter defense and allow guys to get into the paint, you’re going to get killed. Is anyone shocked that this was the score and the Cavs had 46 points in the paint? If you’re curious, Tristan Thompson only had 6 points and Nance Jr 5 points so that’s 35 points coming in the paint from perimeter players. That’s a problem. Then you look at that graphic above and you see some of the highest defensive ratings coming from perimeter players. This team does not have some gigantic rim protector which is why perimeter defense is so important to this group. It hasn’t been there over the last 4 games and the results speak for themselves.

– So yes, if you can’t get it by now, Marcus Smart is pretty important.

– This is a concerning trend

I can live with the bottom third offense as long as the defense is lights out. Where I begin to get annoyed is when both go down the toilet.

– We saw my #1 fear when it comes to facing Lebron in a playoff series, and something I think many Celtics fans have ignored while enjoying their previous struggles.

The Celtics showed last night they have absolutely zero answer for when the Cavs set a screen on Morris and force a big, whether it’s Theis or Horford or whoever to switch. Lebron will clear you out and go right to the rim for either a foul or a bucket. This is the one thing that I care about because when playoffs slow down and teams try harder, it’s the one play that you simply cannot stop. It’s why CLE would probably be favored in a series no matter what the final seeding ended up being.

It’s why I’m concerned that despite the talent upgrade the Celtics could face many of the same issues last year’s team did. Rebounding against CLE is an issue, scoring against CLE is an issue, and stopping Lebron is an issue that will exist until he retires. Does Gordon Hayward solve all that? Maybe a few of them but let’s be fair to him. If we do see him in a potential playoff series, we can’t expect him to cure all of their issues. Other guys are going to need to snap the fuck out of this funk.

It’s a long season. There’s a ton of basketball to still be played, but looking around the East the direct competitors to the Celtics are all playing well. Right now they’re in a rut and it sucks. The Celts have one last game on Wednesday against the Clippers before the break, and I cannot stress how much a win would help change the mood around here. I don’t care that the Clippers are a current lottery team, I just need to see this team play well and win a game so I can finally get some goddamn sleep. 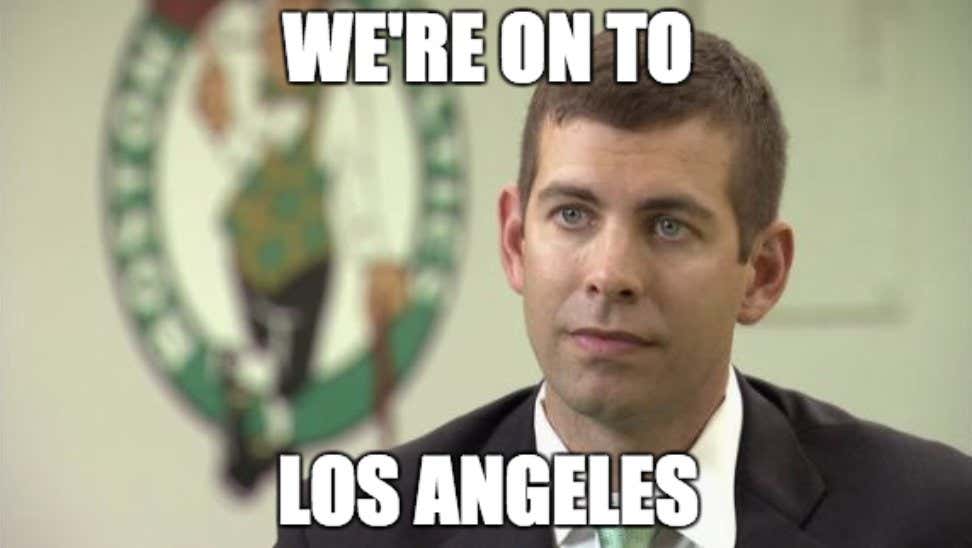