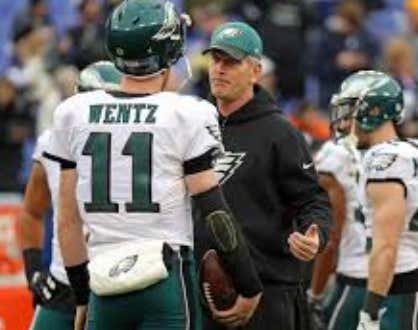 NFL.com – One of the guiding forces behind the Philadelphia Eagles’ Super Bowl victory will be the next head coach of the Indianapolis Colts. Eagles offensive coordinator Frank Reich agreed to a five-year deal Sunday to become the Colts’ head coach, a source informed of the talks between the sides told NFL Network’s Mike Garafolo. Indy’s decision wraps up a whirlwind coaching search for the Colts after New England Patriots offensive coordinator Josh McDaniels withdrew from an announced agreement to become the team’s head coach on Tuesday. NFL Network’s Tom Pelissero reports Reich is scheduled to fly to Indianapolis tonight, per a source informed of the situation, and sign the five-year deal. Reich, 56, emerged as the favorite for the job after meeting with Colts general manager Chris Ballard on Friday. The Colts also interviewed New Orleans Saints assistant head coach/tight ends Dan Campbell and Buffalo Bills defensive coordinator Leslie Frazier.

Damn you, Josh McDaniels and the Patriots. Damn you all to hell.

And so the Philly coaching purge continues. First it was QB coach John DeFilippo spreading his wings to Minnesota, and now the Eagles offensive coordinator is heading to Indy. No, Frank Reich didn’t call the plays for the Eagles. That was all Dougy P. But he was the guiding light to Pederson’s mind when it came to those calls. The night before every game, Reich and Pederson would go over the play sheet for at least an hour. Sure, that could’ve been normal offensive coordinator duties, but obviously you don’t want to tinker too much with what works. And a Super Bowl championship definitely works.

Let’s see who’s the next man up at OC. Smart money would be to brew up some pickle juice and let the Duce loose, but we’ll see. Staley is also to have been rumored to be in the running for the Giants vacant OC spot. He probably deserves a spot somewhere after he masterfully oversaw the Eagles RB by committee this season. It’s a good thing Duce can certainly coach better than he can spell. Chrysanthemum.