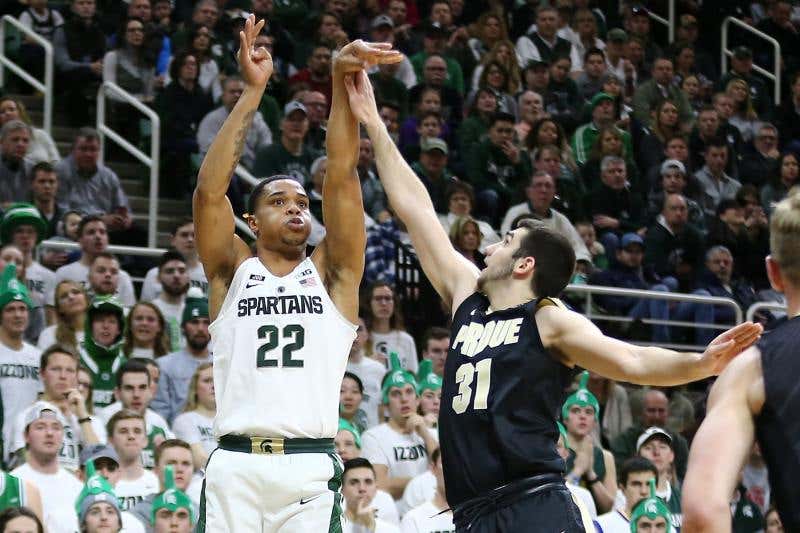 For the second year in a row the NCAA revealed the top-16 of the tournament. I love the idea of it and wish they did it more often just so we can really have some transparency with the whole thing. Here’s the current top-16 from the committee:

So right off the bat you can see the committee are truly using these quadrants, which is new this year. There are four quadrants that games fall into and it’s based on RPI rankings and where the game is played. That’s the reason why Michigan State is a No. 3 seed, something I tried warning everyone about this week. Despite the fact Michigan State might be the No. 1 team in the AP rankings tomorrow (friendly reminder the AP rankings mean absolutely nothing, especially when it comes to the tournament) is actually ranked 11th on the committee. The main reason for that is the fairly weak nonconference schedule and the Big 10 being atrocious.

The Big East getting two No. 1 seeds isn’t surprising and it wouldn’t shock me if that holds up. If Xavier is able to beat Villanova on Saturday in Cincinnati, the Musketeers are set to win the Big East regular season. What happens if they meet a third time in the Big East title game and Nova wins that?

I was a little surprised to see Cincinnati at the No. 2 spot at this reveal. I thought they’d be in the three slot with the big stretch of games coming up for the Bearcats. The committee is showing a lot of love for them early on, which means possibly even more for these games at SMU, Houston and home to Wichita. Three wins in a week span and Cincinnati all but solidifies itself as a 2 seed barring an epic collapse and could potentially get to that 1 line.

Texas Tech as a No. 3 makes little sense to me. I get the nonconference wasn’t great and really just got one great win at home against Nevada. But, the Red Raiders went 4-1 in quadrant 1/2 games in the nonconference and have 11 wins in those two quadrants right now. They also are currently leading the Big 12 – arguably the best conference in America. I would have them on the 2 line right now and it wouldn’t shock me if they move up as the season goes on, especially if they are able to sweet Kansas.

Oklahoma still sitting in the top-16 was surprising to me. I expected to see Gonzaga there, especially after the win at St. Mary’s last night or possibly West Virginia considering the wins the Mountaineers have (including a sweep of Oklahoma). I fully expect Oklahoma to be the most vulnerable team in the top-16 here that would fall out of the rankings if this ever becomes a weekly thing. The Sooners don’t have a bad loss but are just 8-8 in quadrant 1/2 games this year.

I think a lot of people will be angry about Duke as a No. 2 seed with losses to Boston College, NC State and St. John’s, but you have to remember the wins as well. Neutral court wins against Texas, Florida and Michigan State are going to hold a lot of weight here, especially if Duke finishes second in the ACC. I don’t have a problem here with Duke being there.

All in all the committee seemed to get the majority right. We may nitpick one team being in, but getting 15/16 right is a huge step for the committee. I still don’t like how the committee is set up and truly believe it should be made up of people that watch basketball full time and know the game. Get the AD’s out of there and make it a balanced group.

This all can change very quickly too as there are still roughly 1,300 college basketball games until Selection Sunday. I wish they would do this a couple times more, but in the time being this works.