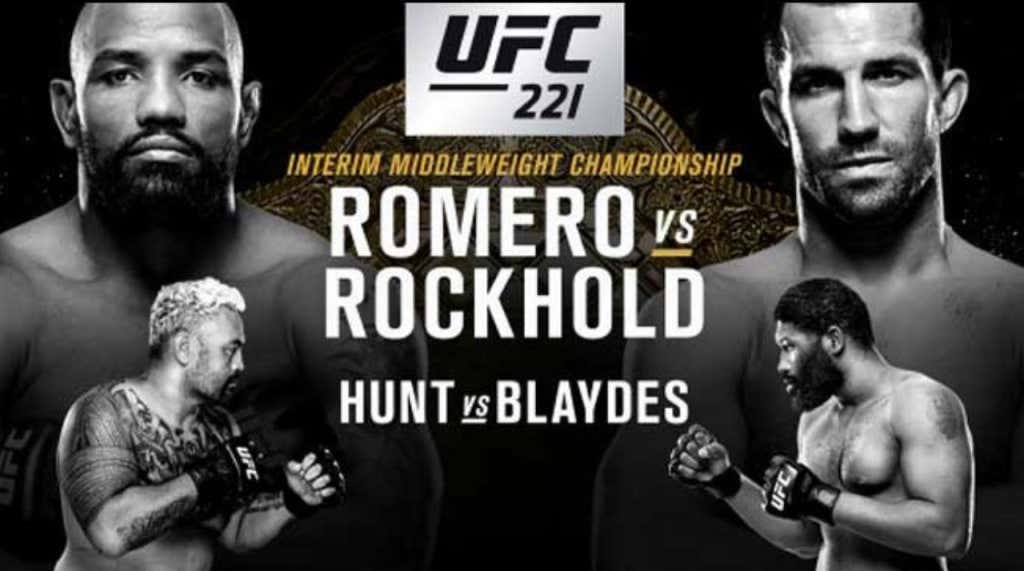 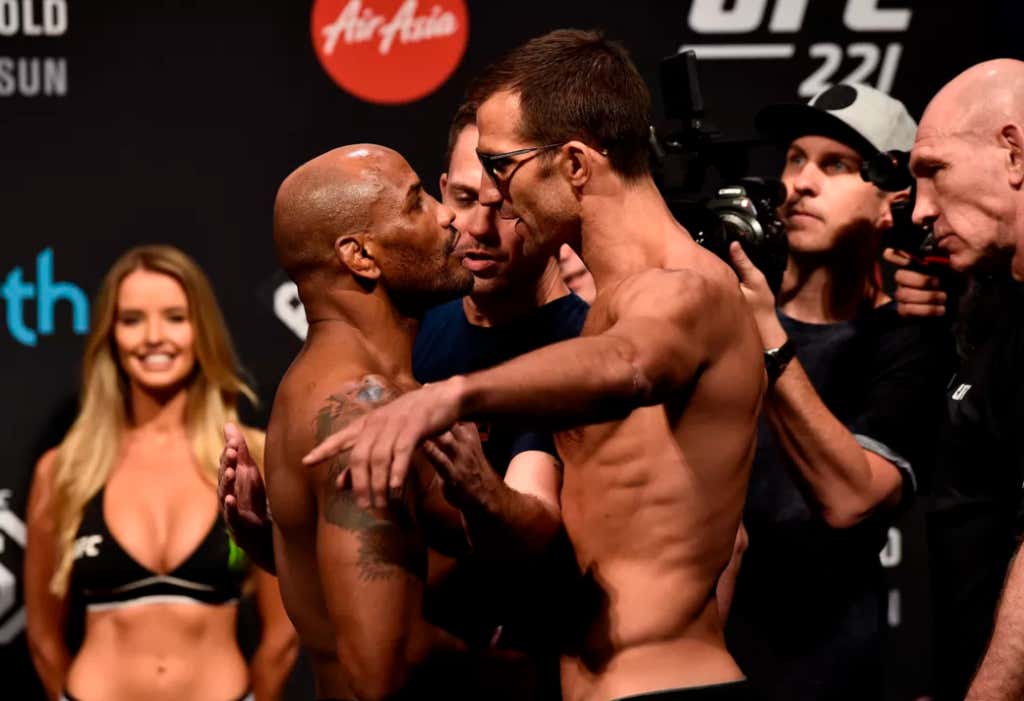 This, before last night, was the hardest fight on the card to predict in my opinion. Sure, Yoel Romero was “exposed” a little bit in his fight against Robert Whittaker (I hate using that word about a fighter as talented as Yoel) when his cardio hurt him badly in deep waters and he somehow didn’t pick up on Whittaker’s fucked left leg for an attack, but he’s still the Soldier of God. He’s still a guy who could put Rockhold (who’s been KOed twice in the UFC) away with one shot. He’s still a freak of nature who can outmuscle just about anyone in that division. Luke Rockhold, on the other hand, is one of the best all-around/pound-for-pound fighters in the UFC. His standup is crisp, clean, and sharp, his wrestling is strong, his size works to his advantage a ton at Middleweight, and his submission game is obviously phenomenal. Those two times I mentioned he was KO’d were his only losses ever with the company, and he’s rocking a 16-3 overall record. Not too shabby.

I went back and forth for a while, actually changing in my mind who I thought would win this fight, until Yoel Romero missed weight by over three pounds last night. He was given two hours to shed 3.3lbs, which is not an insane ask, it’s something that has been done before and sometimes weighing in that heavy could have to do with a personal scale’s calibration being off, so I figured he’d hop in the sauna and come back on championship weight, but no. He came back at 187.7, dropping a mere 0.6lbs. Yoel Romero was so drained and dehydrated that he couldn’t take it any longer and couldn’t physically cut the weight. You all know my stance on weight cutting, how much I hate the fact that we ask the most technically skilled killers on earth drain their bodies to near death 24 hours before we see them compete in such high stakes competition, so I won’t go on that rant again, but it sealed the deal in my mind that Rockhold (who doesn’t have an easy cut himself) is going to pick up the victory in this one. I saw some people on Twitter making excuses for Yoel, bringing up the fact that he took this fight on four weeks notice, but that holds no weight (no pun intended) for me. He was in camp already for a fight with David Branch that was scheduled for two weeks from now. He should’ve been on weight, but he wasn’t. Part of me actually hopes he wins, half because Rockhold is such a fucking douchebag, half because I’m sick and tired of useless interim titles, but when it comes down to it, I think Luke Rockhold will be able to finish this one in the later rounds when Yoel loses steam. He’s a fighter that is known to “take rounds off” or “coast” though, so try not to confuse him potentially doing that here with gassing. Wait for the real deep mouth breathing. Although if he learned anything from taking round three off against Robert Whittaker, he’d try to not to do that anymore. 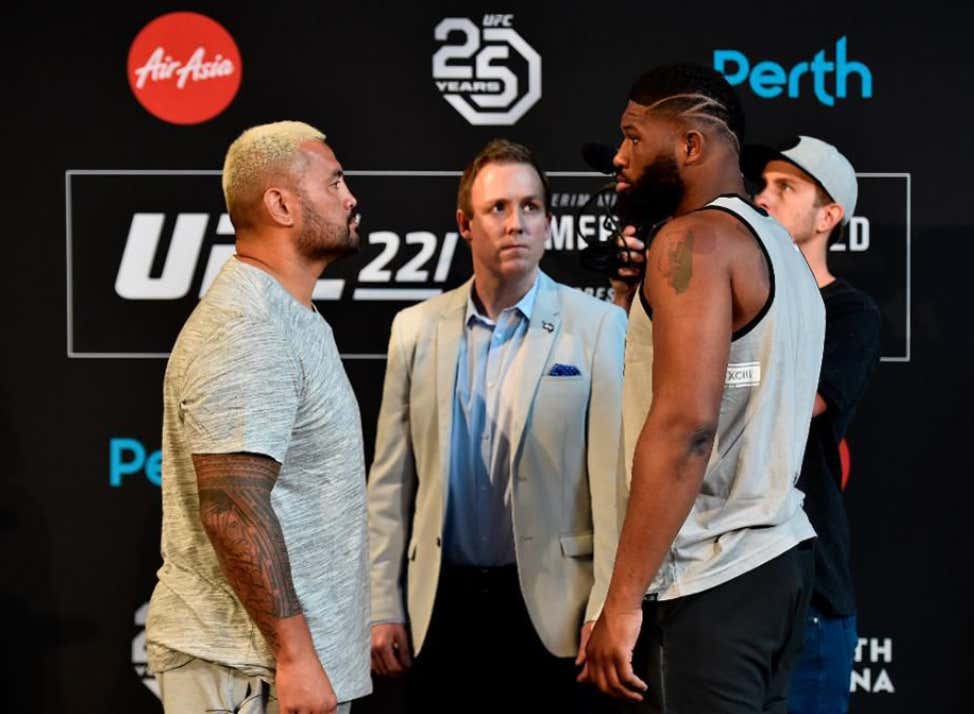 I’ll keep this one short and sweet: I ain’t picking against the Super Samoan in Australia. This is one of the last fights on his current UFC contract, and he’s got an ongoing lawsuit against the company due to Brock Lesnar stepping into the octagon with him at UFC 200 on steroids, and multiple other opponents of his being on steroids, really this guy HATES performance enhancing drugs more than anyone on the planet, so him renewing when retirement is right around the corner and Bellator is building their own Heavyweight Division seems a bit up in the air, but I think he wants to go out there and make a statement in his homeland no matter what. Sure, he’s shown his age recently and slowed down a lot, but Curtis Blaydes hasn’t shown me anything that truly impressed me a ton in his last few to make me think he’ll be able to stop Hunt. His wrestling is probably his best bet, as his double leg is fantastic and Mark Hunt has very poor defense in that department, but Blaydes shares just as poor defense in the striking part of the game. Hopefully we’ll see another walk off KO from the vet. 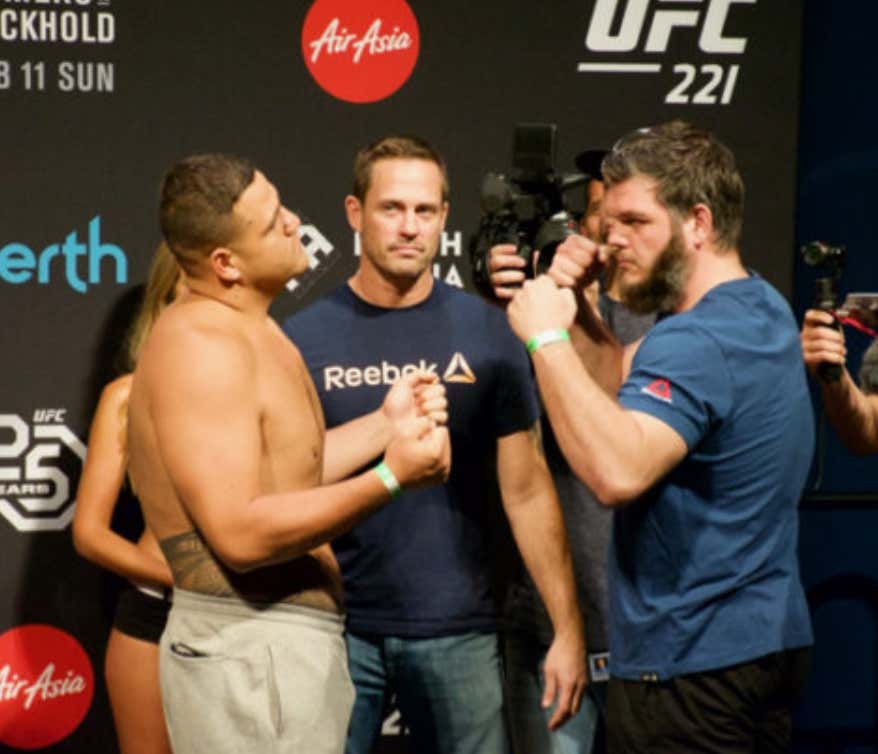 I think this one is all Bam Bam’s. He’s an exciting prospect who has finished all six of his first by knockout in the first round, and I think this matchup was made with the fact that the heavyweight needs exciting prospects in mind. Cyril Asker is a talented fighter, but I think he’s being set up for the sake of a highlight reel tonight. Should be fun. 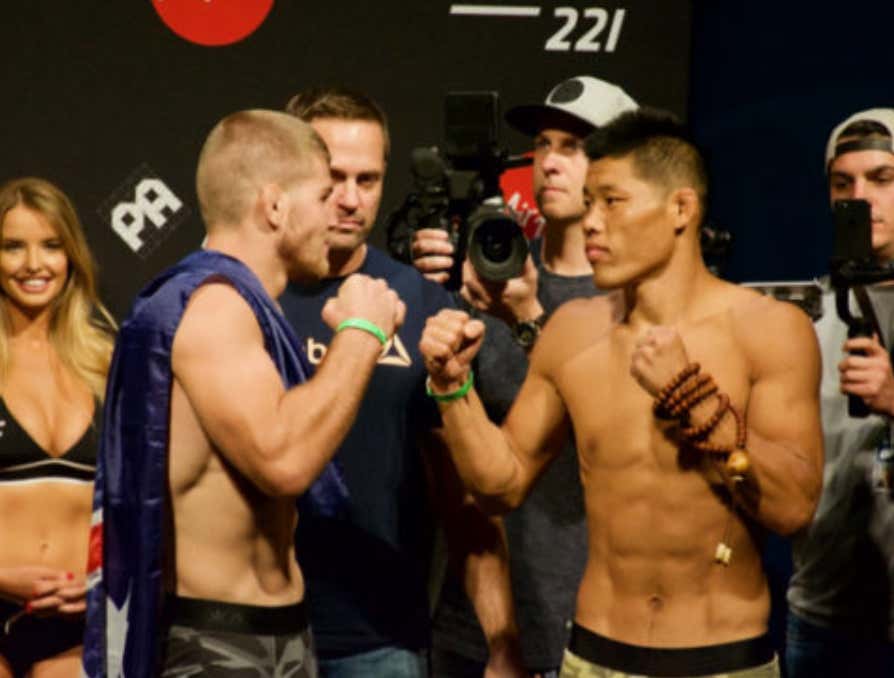 This matchup is absolutely awesome. We’ve got two incredibly talented unranked fighters with something to prove. They both want an opponent in that Top 15 and the only thing standing in each of their way is the other person in that octagon with them. Jake Matthews, the 23-year-old Australia native, is coming off a split decision victory over Bojan Velickovic in November, his first fight at 170lbs. He suffered two defeats in a row before that fight, one to Andrew Holbrook, one to Kevin Lee, but the move up a weight class seemed to work in his favor and he’s now attempting to cement that statement. Li Jingliang, “The Leech”, snip-snapped some wins and losses to begin his UFC career, and is now on a four fight win streak, three of which were by an early KO/TKO, and the most recent featured this amazing moment where he hopped into the crowd to celebrate with his wife and daughter…

I’m all in on The Leech. Love him, think he’s electric, the nickname is just too good. Let’s fucking go Jingliang. 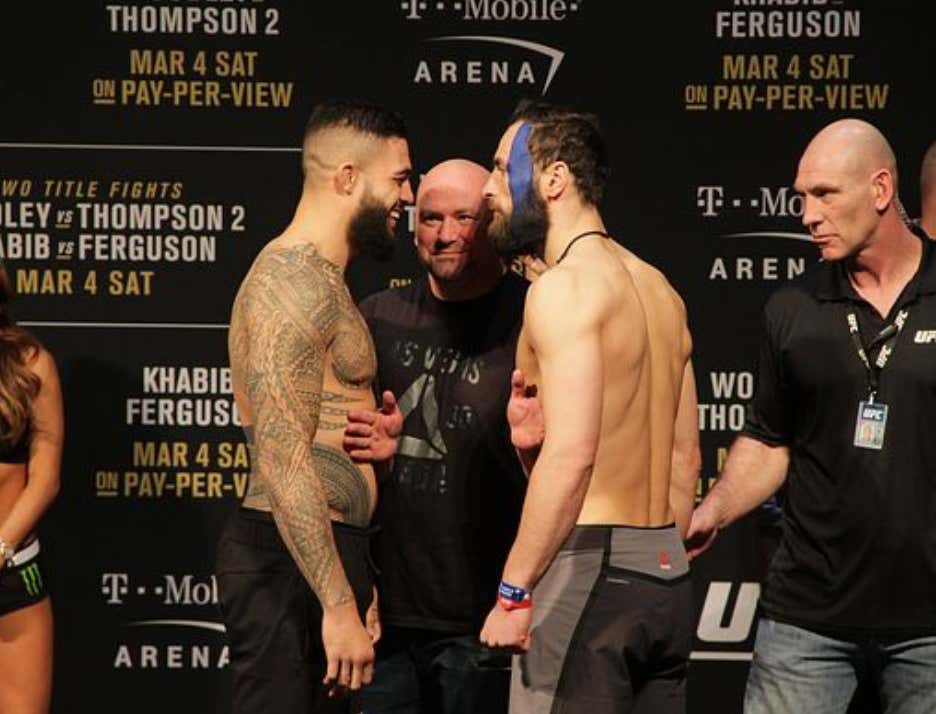 Finally, the main card’s curtain jerker, a light heavyweight slugfest. These two guys are both decent knockout artists, both undefeated before being bested in their last fight, and I’m taking Pedro here. Gian Villante knocked Safarov out in December of 2016, and that was his last fight. So the combination of the long layoff, being KO’d by Villante, and never having really faced great competition is enough for me to side with Pedro.

That’s all for the main card, make sure to check out the prelims for Israel Adesanya’s debut in the UFC because he’s an awesome kickboxer (57-5) who seems to be handling the transition to the cage (11-0) really well. Here’s some highlights of his to persuade you to check him out on FS1 early in the night (his fight should start around 9pm).

And with that, I’m about finished with the preview! As always, tweet me during the event (@RobbieBarstool) and check back here afterwards for a recap.