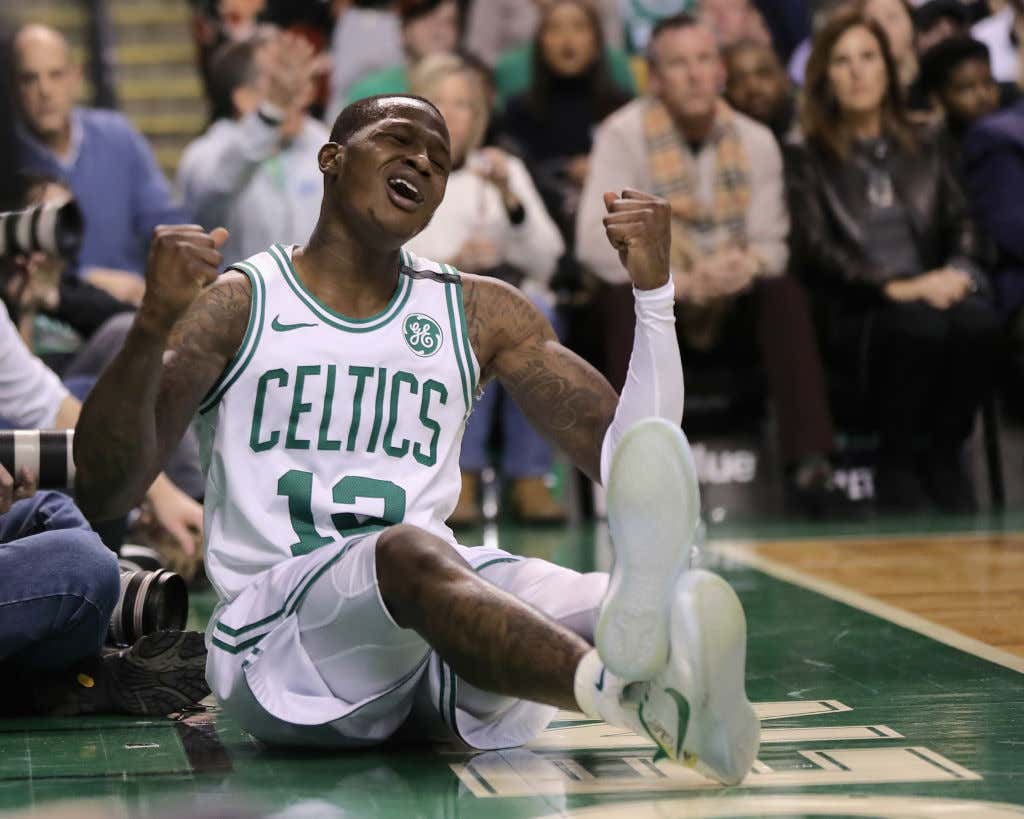 At the beginning of this week I thought the upcmoming four games were a great opportunity to see where the Celtics stack up against some of the other top teams in the East. Well, three quarters of the way through, the results are in.

They were blown the fuck out against Toronto

They were down 26 to the Indiana Pacers, came back, and got out executed down the stretch…at home.

Safe to say the Celtics have not been playing the best basketball of their season as we limp into the All Star Break. This isn’t a case where Ainge made drastic moves at the deadline and the team is in shock or anything like that. They’ve just been getting their ass kicked. In the grand scheme of things, they’re 40-17 which is miles and miles better than we all thought they could be when Hayward went down. The overall outlook still looks good. But that doesn’t mean we can’t be annoyed when the Celtics play like assholes. For me it’s more frustrating to see them play a game like last night because of what they’ve shown us for the duration of the year. It’s no secret the Celtics love to get down by 15+, they move it more than you love your own mother, but god damn is it taxing. After going two months of not living that 20+ life, they’ve now done it in two of their last three games. That has to stop.

But even with all that, the Celtics had a lead in this game with 4 minutes to play, at home. It feels like I’m putting this in every blog, but once again the Celtics were out executed late in a close game that ultimately determined the outcome. I am at a loss with how this keeps happening. When your coach is this good, and your point guard is this good, and you have an All Star big man, you need to be able to figure out how to close games.

But they couldn’t, and unfortunately what was a thrilling comeback fell flat in the final minutes. God dammit.

– Despite how annoyed I may be with this performance, one thing I cannot be mad at was the play of Jaylen Brown

16 points on 7-13 shooting, if you want to look for a reason the Celtics were able to climb back into this game, look no further than Jaylen Brown’s third quarter (12 points).

In 5 games this month we’re not seeing Jaylen hit any sort of wall, in fact he’s never played better. His 16/4/2.8 averages on 49/46% with 2.6 3PM is no joke. He’s also playing defense, with the 4th best Drtg on the team so far in February. My only issue was I wish we got more Jaylen, but after playing all 12 minutes in the 3rd and on a back to back, Brad had to be smart with CLE tomorrow. Jaylen only played 3 minutes in the fourth.

– Right there with Jaylen as he usually is, Jayson Tatum was great too

15/3 on 6-11 shooting with 4 blocks…yes 4, Tatum bounced back nicely after a rocky shooting night against WSH. It’s completely irrational, but I’m at the point where whenever Tatum goes up for a shot, my brain assumes it’s not even going to hit the rim. Every. Single. Shot. The closest thing I can compare it to is the confidence I felt when Ray shot it, and Tatum isn’t Ray Allen so I fully understand how ridiculous that is.

But that’s just half the story. If there was an All NBA Defensive Rookie team, Jayson Tatum is 100% on it. He was everywhere last night, setting a career high in blocks. Did you know Jayson Tatum leads THE ENTIRE NBA in defensive win shares? Everybody, all positions. In fact, the Celtics now have 3 of the top 4 (Tatum, Jaylen, Smart) and 4 of the top 6 if you include Horford.

When you look at the list and see that Roberson and Kawhi are hurt, it’s all Celtics until three Sixers (Embiid/Simmons/Covington). Not bad!

– He led the team in points, and was a big part of that third quarter/fourth quarter run, this was a good but not great Kyrie night

Offensively, it didn’t feel as though Kyrie made the same effort to get into the paint like he did against WSH, and he struggled early going 2-7 in the first half with everything coming from the perimeter.

That obviously changed when the Celtics went on their run, and that’s because Kyrie was way more aggressive to the painted area 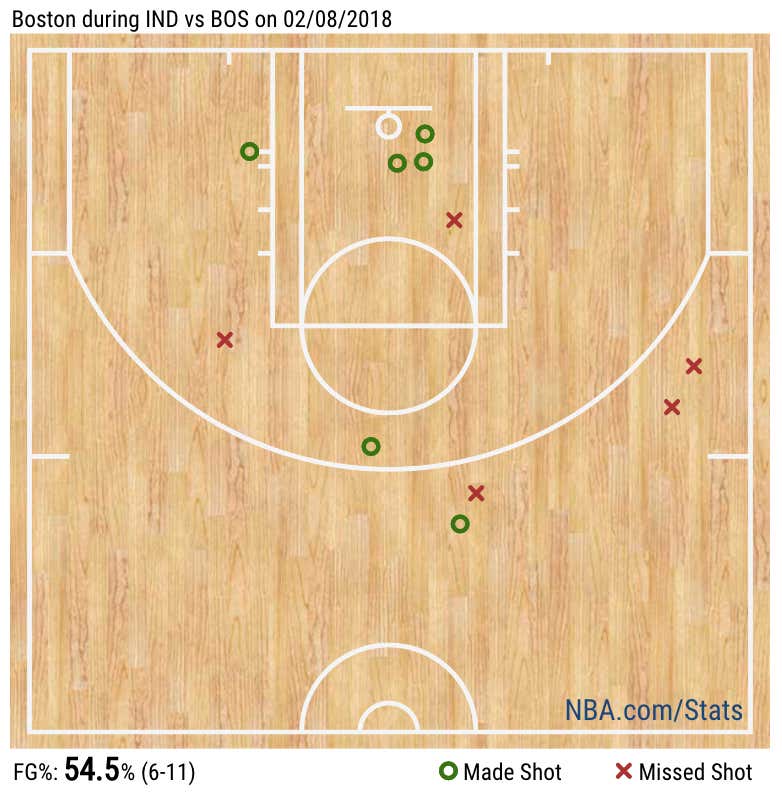 This is why I get frustrated when Kyrie settles and I think that’s a little bit of what Brad was talking about with shortcuts. Kyrie can get into the painted area whenever he wants, and when he does this team is better because it’s an area he thrives in. When they get lazy and he settles for iso pullups, that’s when things get weird.

– You want the spark for the comeback? Here ya go

What a defensive play by Al, what a heads up play in transition from Jaylen. Perfection.

– He had a rough night, but this was nails

– After some of the worst defense we’ve seen this team play all season, the second half was a completely different story. More energy, better communication, actual effort, it was good to see them snap out of their early funk. The Pacers shot just 35/11% and had 7 TOs in the second half, and there isn’t even a comeback to blow in the minutes unless this team woke up and played defense.

– The Celtics have a Victor Oladipo problem plain and simple. They can’t stop him. In the two games he’s played he’s been 35+ and if not for a prayer Rozier steal at half court would be 2-0. You name a guard for the Celtics last night and Oladipo worked him. Kyrie? Yup. Jaylen? Yup. Rozier? Yup. It didn’t matter who they put on him they couldn’t stop him from getting to the rim, and that proved to be a factor late.

All the credit goes to Oladipo, he’s turned himself in to one badass motherfucker.

– A big reason why Oladipo was able to go off was the Celtics were so goddamn lazy with their dribble handoffs. When you see the Celtics do stuff like this, it’s when you can tell they aren’t focused and are just going through the motions. Obviously a team that’s jazzed up to play you and is winning the effort and energy battle is going to disrupt those plays and convert them for easy baskets. Not a surprise the Pacers doubled up the Celtics in fastbreak points.

In the meantime, we had Rozier/Morris go 1-9. Kyrie went 2-5. When as a team you are struggling to make shots and shoot 31.8/14.3% in the biggest quarter of the game, why are you ignoring the two guys who were your most solid offensive options all night? I dunno if this is a Brad thing and he just wasn’t calling plays for those guys, or a player issue in that everyone just tried to be the hero, but that fourth quarter was brutal to watch. The rotations were weird and the offense was very similar to the first quarter, which if you remember was horrible.

– Anytime you have like a 4 on 1 fastbreak and instead of just going for the easy layup you can take a transition 3PA you have to do it. You also have no choice after missing that shot once you get the rebound you have to take it again. Those are the rules.

– For me, the game changed in the last 3 minutes. Late game execution is what separates the contenders from the pretenders. Given the talent on this team, they should not be struggling so much to close games out. Since this isn’t a talent issue, I’m calling it a shot selection issue. We’ve seen it with Smart, and we saw it again last night with Jaylen and Kyrie. Here’s the sequence

Understanding the situation is important with both of these shots. See Horford had just given up the offensive rebound slam which certainly wasn’t great, then there was a defensive three second from Al that wasn’t great either. The game was in balance and the Celtics NEEDED a good offensive possession to help re-establish momentum. This brings us to Jaylens shot. There is about 50 ft from him and his defender. I get Jaylen has improved his three point shooting, and I get that he was baited into it, but he needs to understand the situation. He took this shot with 12 seconds on the shot clock. There is not ONE Celtics player in the paint. Instead, Jaylen should have used this space to create momentum to get into the paint and to the rim. Either he makes it or he probably gets fouled. Instead, a rushed 3PA was the choice.

Now before Kyrie’s shot the Pacers did exactly what the Celtics should have done. They attacked the weakest defender on the floor and got to the rim, where Oladipo made his layup. Now down four, the Celtics REALLY REALLY needed a good offensive possession. Instead? The got Kyrie holding the ball on an island against his defender. Do we really think Bogdanovic is staying with Kyrie off the dribble? No. He could have easily blown right by him and I know this because he literally did it to end the game. But he didn’t, and he chose the contested 3PA which shocker, did not work out.

This is where I need Kyrie to be more aware as well. Jaylen is young, this is new for him, but not Kyrie.

– 53-38 difference on the glass. You deserve to lose when that happens.

– We now know that starting a game with 23/0% splits while allowing 61/66% splits is not a way to win a basketball game. Maybe you weren’t sure heading into this game, but it’s pretty clear now in my opinion.

– I am just going to present this without comment

Gross. Fortunately with Pierce Day tomorrow I’ve already forgotten this game even happened. I suggest you do the same and spend today just watching Pierce highlights on YouTube. Safe to say this game against CLE is pretty important, not only for H2H reasons, but you can’t lose to Lebron on Paul Pierce day. You just can’t. 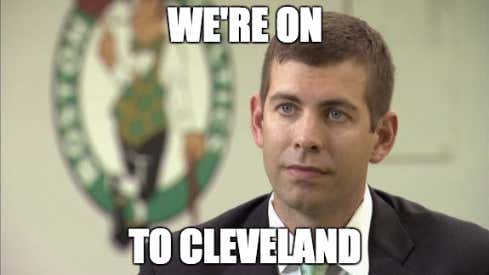