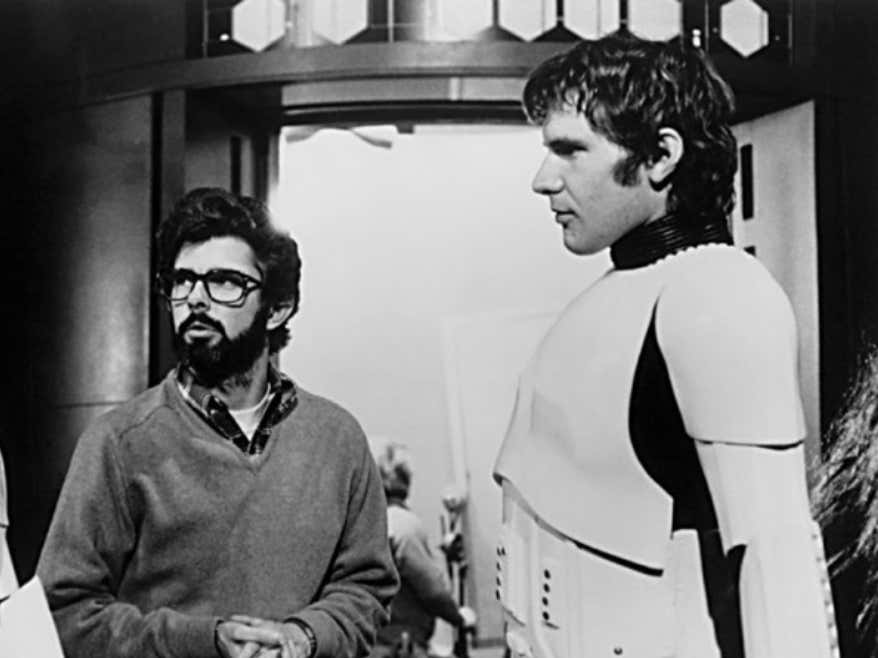 Just now, I was reading a piece on Ron Howard joining ‘Solo: A Star Wars Story’ to finish the film after directors Lord and Miller departed (were fired) from the project due to creative differences with Lucasfilm. It was really well written, by Anthony Breznican, a guy who’s work I enjoy a lot, and I was absolutely stunned when the article started talking about George Lucas and his wife, Melody, visiting the set. Give it a read:

“He came by to visit the first day that I picked up shooting. George and his wife, Melody, came by to pay a little set visit. It made me feel great,” Howard says.

“He told me just trust my instincts, you know?” Howard says with a laugh. “I know he kind of fundamentally feels like, first and foremost, [these films are] sort of for 12-year-old boys, and yet even he knows that it’s grown so far beyond that, and the fans have grown with the series in a great, important way. So he didn’t offer a lot of advice except, ‘You’ll get this.’”

“He had intended to just kind of stop by and say hi, and he stayed five hours,” Kennedy says. “There’s even one little moment in a scene that — I can’t tell you what, sorry — but in the scene on the Millennium Falcon where George said, ‘Why doesn’t Han just do this.’”

In other words, George Lucas helped direct a small part of Solo.

“It actually is a funny little bit that will probably get a laugh,” Kennedy says. “And Ron happened to be by the monitor and not inside the Falcon and he goes, ‘Oh that’s a great idea,’ and ran in and said, ‘George wants us to do this.’ So that was pretty cool. I think George felt pretty great about that. He could revisit these characters, and I think he felt so comfortable, obviously with Ron being there, that it was just fun for him.

George Lucas, after the success of ‘Star Wars’, ‘Empire Strikes Back’, and ‘Return of the Jedi’ spent a few years away from the exhausting filmmaking business, basically, to be a good father. He wanted to raise his kids right, and knew that in order to do that, he couldn’t be the George Lucas that made Star Wars. He just had to be a dad.

When he returned near 20 years later, it was with ‘Star Wars Episode I: The Phantom Menace’ in 1999, widely known as the most anticipated film of all time…and widely known as the biggest disappointment of all time. Its follow-ups, ‘Attack of the Clones’ and ‘Revenge of the Sith’, were also panned across the board by critics and fans alike (the latter being a clear step above the previous two, however). Star Wars fans, or Star Warriors if you must, were ruthless savages with Lucas for years because of what the prequels turned out to be, and because of his “Special Edition” changes to the Original Trilogy. Death threats, claims that childhoods were ruined, and even accusations of childhoods being raped ran rampant for at least a decade, all directed at George, and he became seemingly became sick of the franchise he once created. He briefly thought about making a new trilogy exploring what’s happened to the galaxy 30 years after the events of ‘Return of the Jedi’, but ultimately sold the Lucasfilm empire to Disney, passing along his story treatment for Episodes VII, VIII, and IX. He probably did this as to not put up with the tsunami of backlash that could’ve potentially hit him once again.

Disney has since added three films to the saga, ‘The Force Awakens’, ‘Rogue One’, and ‘The Last Jedi’, the most recent of which being closest to what George intended to do with the series, and supposedly his favorite of the bunch. While the fans haven’t gotten any less passionately divisive over what went down a long time ago, in a galaxy far, far away, they’ve seemed to come to their senses about the man who started it all for the most part. At this year’s Star Wars Celebration in Orlando, George Lucas received one of the more thunderous ovations I have ever heard, and was met with nothing but love from all of the hardcore fans who had gathered to celebrate everything we love about his fantasyland.

For a brief moment, he almost smiled!

If you’re not a Star Wars fan, you’re more of a sports guy, I’ll make this analogy…imagine that after Steve Bartman made the catch on that foul ball in 2003, he did the exact same thing three years later, and then did the exact same thing three years after that. Like, he stopped the Cubs from winning the World Series THREE TIMES when they were that close. Imagine the backlash. Now imagine the backlash was from millions upon millions of people that look just like me. See how excruciating it must’ve been?

When the Cubs won the World Series in 2016 though, everyone in the city of Chicago realized they were waaaaay too hard on Bartman for way too long, and forgave him. That’s pretty much what most Star Wars fans have done with George Lucas recently. There’s a problem with this analogy, however, and it’s this: Steve Bartman wasn’t the founder of the Chicago Cubs. He didn’t create everything anyone ever loved about the team. He didn’t design the ballpark they played in. He didn’t pick out their logo. He didn’t make the pitching changes, or the even the lineup shifts. George Lucas, for Star Wars, did all of that and then some. Without George, none of this happens. We don’t have absolutely anything related to the Wars without it all coming from George Lucas’ brain first. For years everyone forgot that this was the man who introduced us to Luke Skywalker, to Obi-Wan Kenobi, to Han Solo and Princess Leia and C-3PO and R2-D2 and ALL of this! Everything you know and love in this franchise…is all thanks to him. He didn’t ruin your childhood with the prequels, he made your childhood with the originals.

So for George Lucas to be able to return to the set of a Star Wars film in 2017, after all of that, which was now being directed by a good friend of his in Ron Howard (who was actually in ‘American Graffiti’), and say, “Eh. I think Han would do it like this…”, MAN does that warm my heart. Sure, it was only a small suggestion, but it’s the fact that George got to return to that galaxy far, far away and tell the director of the spinoff Han Solo movie how Han Solo would react in a situation. To me, that’s incredible.