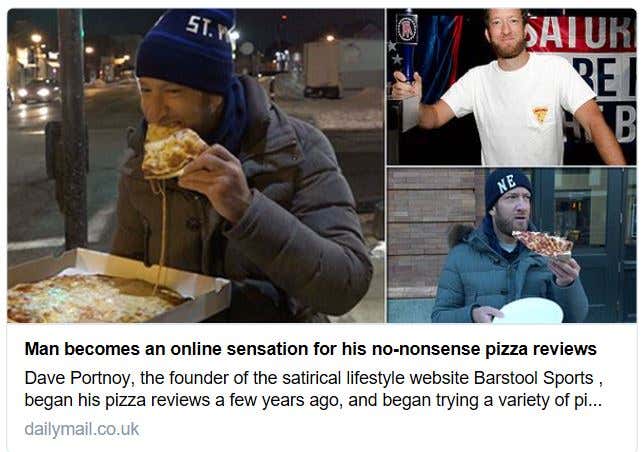 DailyMail - A man has devoted years of his life to testing different pizzas, rating each slice on a scale of one to 10 with impressive seriousness. Dave Portnoy, the founder of the satirical lifestyle website Barstool Sports, began his pizza reviews a few years ago, at the time sharing his impressions every once in a while when he encountered a slice of interest.

I’ve been doing Barstool for 13 years. I was delivering newspapers when half this company hadn’t been conceived yet. I’ve run national music tours. I’ve been to jail for Tom Brady. I ran for Mayor of Boston. I’ve bought 2 companies. I’ve helped turn this thing rag tag website to a 100 million dollar company. And when it’s all said and done I think the only thing that people will remember me for is that I ate a ton of pizza (and filmed Smitty in the shower) And guess what? I don’t hate it. Online sensation has a certain ring to it.  Dave Portnoy “Online Sensation”

As a sidenote I feel like saying I’m 40 in the title of this article was a big time cheap shot, but I have no justification for feeling this way. The facts are I am 40 years old. Boo.