Things are not what they used to be
Missing one inside of me
Deathly lost, this can’t be real
Cannot stand this hell I feel
Emptiness is filling me
To the point of agony
Growing darkness taking dawn
I was me but now he’s gone 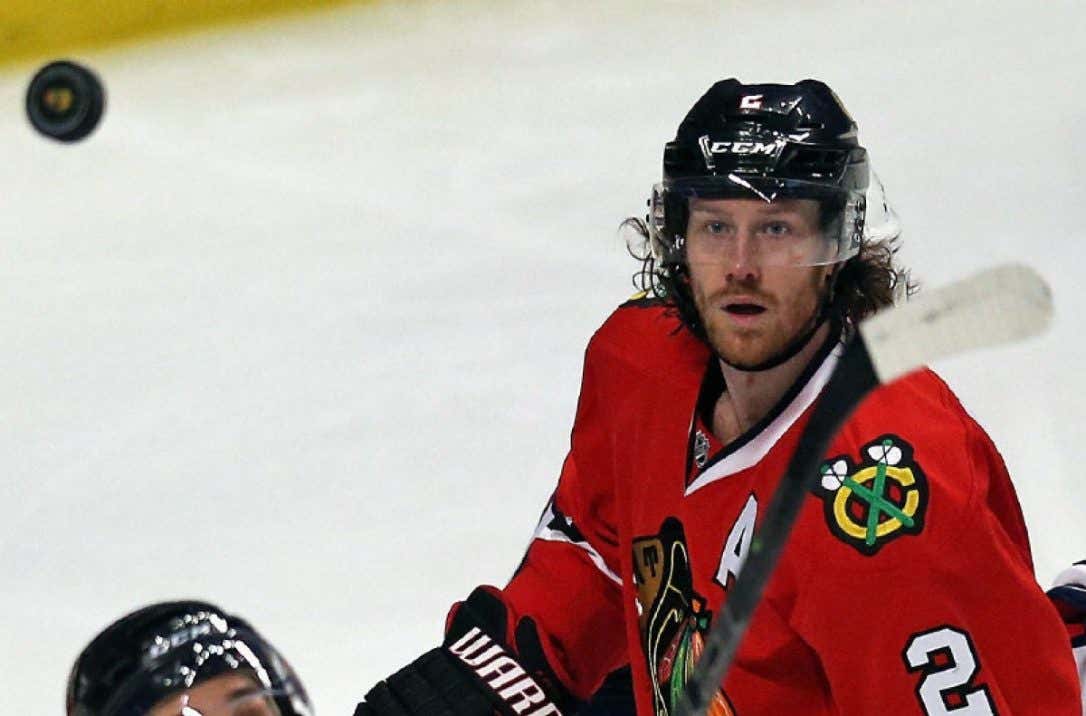 Last night was it…I’ve given up hope for this team in 2017-18. Officially. This was a critical stretch of the season here starting around the all-star break. The Blackhawks had winnable games against teams they were battling in the standings. If they could’ve won 5 of 6 against Calgary, Vancouver, and Dallas then they would’ve been back in the mix and trending in the right direction. Instead the Blackhawks have now lost 4 straight and 6 in a row at home. IN OUR HOME!

The sad thing is that the Blackhawks actually played well. They were buzzing around. Toews potted the first goal of the game. The Hawks controlled the play in the second period and somehow gave up 3 goals. That’s the way things go for this team. They make some mental mistakes with the puck and Corey Crawford isn’t back there to pull their ass out of the fire. And when you’ve pissed away the majority of the season with poor efforts and put yourself in an 8 points hole, games like last night become even more magnified. In a normal year, when the effort level is consistently good then you’d just throw last night away and say “hey, that happens sometimes”. This year it’s an absolute dagger.

Stan Bowman said last night before the game that the Blackhawks wouldn’t be buyers at the deadline…uhhh…ya think? From an organizational standpoint, it’s time to just let the 2017-18 season fade to black. Start looking towards next year. Be sellers at the deadline. Challenge your young players and tell them they need to step up and start being leaders NOW. Set the foundation for next year NOW. Bring them in for their yearly exit meeting now and ask them what they want their next contract to look like. Andrew Shaw, Andrew Ladd, Byfuglien, Frolik, Versteeg, and even Viktor Fucking Stalberg got PAID because they were winners. Do you want your next contract to reflect that or do you want to be a Ryan Garbutt or Drew Stafford who is just constantly bouncing around, never really cashing in and a guy teams just try to fill out their bottom 6 depth with. Schmaltz, Hinostroza, Hartman, DeBrincat, Duclair, Hayden, etc are the future of this team. They need to take ownership of that locker room and be voices and demand accountability. They have to take the torch from Keith, Seabrook, and Sharp. There needs to be a new leadership council.

1) What Has Happened To Duncan Keith

Everyone talks about the decline of Seabrook, but Keith has been about equally as disappointing this year. He has been fighting the puck and his own brain all year. He used to be the engine that drove the Blackhawks. His ability to take away space, create turnovers, and turn defense into offense was what made him a Norris Trophy caliber defender. Now, his production is way down, and his decision making with the puck has become a major problem for the Blackhawks. Last night was a microcosm of his season

This just can NOT happen. Obviously Crawford makes that save, and really any NHL goalie should’ve, but Keith’s decision-making has gone in the tank. His feet still move at a top pair, and certainly a top 4 level, but his brain doesn’t. Usually when defensemen age and slow down, it’s their brain that allows them to be effective. That’s not what’s happening with Keith this year. I hope this is just a BAD year, and he needs time to evaluate where his own body is. It almost feels like he hasn’t adjusted mentally to what his body can and can’t do and it’s causing him to make uncharacteristic mistakes. He still has physical ability to be a good dman, but the mistakes he makes with the puck would get others benched.

2) What Has Happened To Brandon Saad?

Brandon Saad is one of the NHL leaders in corsi carrying a 58.4 CF%. Now, everyone knows I hate shot-based metrics because they’re not predictive and Brandon Saad is a case study for that argument. He’s the “most effective” and least dangerous player in the league. He lives on the wall. He still does a great job tracking back and taking away space and he can control the puck on the wall as good as anyone…but it’s ineffective possession. There’s no threat to the defense ever because he can’t get inside the dots. Can’t or won’t. Saad is on pace for 396 shot attempts this year, which would be one shot below his career high of 396 in 2015-16. That year for CBJ Saad also had a career high in goals with 31. This year it’s all just perimeter play. Nothing inside. Never around the net. When Joel talks about “shot selection” and “shot type” you can point a finger at Brandon Saad. His shots are one and done type plays and are essentially a turn-over. Saad is an enigma. Still only 25 years-old and he should be in the mix with guys I listed above as the future of the team, but it doesn’t feel that way right now. I still think he can find his game that made him a 6 million dollar man, but there needs to be a willingness to change the way he plays.

3) Where Would The Blackhawks Be With A Healthy Corey Crawford?

I’d say the Blackhawks would be right on the brink of the playoffs if not in that second wild card spot. Glass is a great story and he battles his ass off and Forsberg has had some nice games, but Crawford has the ability to cover a lot of warts. That goal at the end of the 2nd period NEVER gets by Crawford and the Blackhawks probably win that game with him. Ditto for the game in Calgary. Corey never seems to give up those back-breaking goals. How many points in a year is an elite goalie worth? For this team…probably like 15-20. Goaltending isn’t the only problem with this team, obviously, but it is the problem that will cost them a playoff spot.

4) Sellers At The Deadline

This is the reality. Bowman said they wouldn’t be buyers, but that doesn’t mean they’ll stand pat either. The Blackhawks don’t have anyone that’s going to bring a big haul back, but they might have a few guys who can return low round draft picks.

— The Blackhawks have 4 dmen currently under contract for next season. Keith, Seabrook, Murphy, and Oesterle. I would bet that they’d all be back next year. They also have young defensemen who are close to being ready like Forsling, Dahlstrom(called up today), maybe Snuggerud, and 2017 first round pick Jokiharju. Bowman will also have some cap space to play with next summer for the first time ever. It’d make sense to go after a top 4 dman.

That means Kempny, Rutta, and Gustafsson are all expendable. The old cliche of “you can never have too many defensemen” might make those three guys attractive to teams looking to make a playoff push. None of them are going to yield anything more than like a 5th round pick, but the later rounds of the draft are a lottery and the best chance at success is to have a lot of tickets.

–Tommy Wingels. I do NOT want to trade Tommy Wingels. I love Wingels. Last night he showed what he can bring when deployed properly. He’s a winger who was made to play out of position as a center for the majority of the year. When you’re F3 it’s tough to be an effective forechecker and energy player, which is what Wingels was brought in to do. My guess is that Tampa Bay and Toronto would both be interested in Wingels as a depth piece and character guy heading into the playoffs.

–Lance Bouma. Not sure he has any value, but he really doesn’t have a place on the roster next year either so I assume the Blackhawks will see if there are any takers who need a little sand in their lineup.

–Tomas Jurco. A reclaimation project for the Blackhawks that hasn’t really worked out. He played well in the AHL this year and has shown flashes in the NHL, but with Hayden coming back next year and Sikura being added to the mix along with Matthew Highmore there’s no future for Jurco here. If they can get a 7th round pick they should do it.

–Arty Anisimov. He can’t help this team anymore. Anisimov has a full NMC right now, but that becomes a limited NMC starting on July 1. Vegas would be my first call. They could use some center depth and a guy with post-season experience.

The Blackhawks likely are going to be picking 10th

Even though the Blackhawks have picked a TON of defensemen high in recent drafts with Krys, Mitchell, and Jokiharju…I would want them to go dman again. Obviously if you win the lottery and you get Dahlin then youre so back that it’d be Chris Berman memes all summer. People always ask me about Quinn Hughes. Maybe just because he’s a Michigan kid and has been electric, but he seems very similar to what they have in Jokiharju. Two names that I would look for in that 7-10 range…Noah Dobson and Evan Bouchard. Big, mobile, and skilled defensemen. Two guys who might be ready in 2019-20. The Blackhawks desperately need an impact top pair type defensemen. Those are EXTREMELY hard to find. One of the keys to the Bruins resurgence this year has been the play of McAvoy and Carlo. The Hawks are going to need to hit on this draft like that.

Pending some magical 15 game win streak, the season is basically over. That doesn’t mean that the window to win is closed forever for this group necessarily. Schmaltz, Hinostroza, Hartman, Hayden, DeBrincat, Duclair, and Sikura continue to grow. Toews, Saad, and Keith bounce back(I think this is plausible) and Jokiharju gives the defense Samuel Girard type of play. Oh…and Crawford and significant cap space. There’s a path forward for 2018-19, but they need to start setting a new culture and sense of accountability now.