I hate to do this to Dave because I know he loves him, but I’m officially designating myself Barstool’s Johnny Weir blogger. It’s well within my jurisdiction and he deserves our undivided attention. For those of you who don’t know, Johnny is a two-time Olympian turned fashion designer turned analyst for NBC. Think about him as the Joan Rivers of Olympic commentary except meaner. He’s paired up with former gold medalist Tara Lapinski and the two of them together are must watch TV.

Last night were the team events which don’t really matter. The athletes don’t take anything home and everyone kind of phones it in. Apparently, that message never got back to Johnny and Tara because they went SCORCHED EARTH on every. single. skater. Most of whom are eighteen years old. The pair went particularly hard on US skater Nathan Chen.

Source - His program, which included a fall, was deemed “tentative and slow” by Lipinski, who also called it “disastrous.” Weir, meanwhile, said it was “the worst short program I’ve ever seen from Nathan Chen.”

All while wearing a bedazzled red blazer with his main bitch by his side. 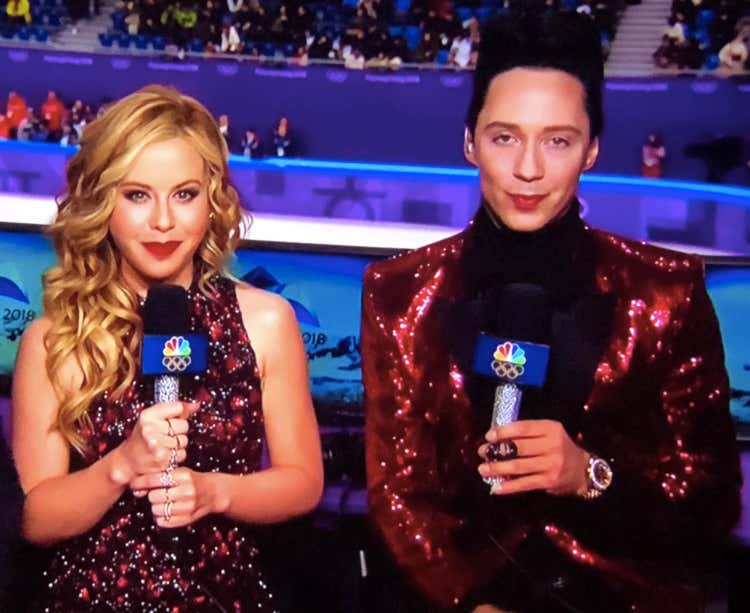 I’m not even going to get into the fact that he matched his watch to his stick mic to his top-third ring. Naturally the internet took offense.

It’s like they forgot who they were dealing with. Johnny Weir isn’t some vanilla commentator like Bob Costas, he’s the king of shade. The Regina George of the Olympic games. He’s saltier than Tiffany Pollard. It doesn’t matter how good you perform, he’s going to rip you. People need to remember that this is the Olympics not rec. league. Athletes aren’t there for fun they’re there to win. They can take the criticism, and if they can’t they should get the fuck out. Johnny went on record saying, “there’s no one more judgmental than an ice skater.” Last night he proved it and I couldn’t be happier. So keep doing you, Johnny. I’m looking forward to seeing what barbs you come up with next.