(Variety) – While studio negotiations are not yet underway, Phillips has made it clear that Phoenix is the top choice to star and sources now tell Variety that, after thinking it over, Phoenix has agreed to the role. WB had no comment.

The movie would fall under a yet-to-be-announced new banner of DC Comics, which would give the studio the opportunity to expand the canon of the iconic comic-book characters with unique story angles that aren’t included in its current cinematic universe. Jared Leto most recently played the Joker in “Suicide Squad” and is likely to reprise that role in “Suicide Squad 2,” but will not be featured in this film. Rumors circulated that Leonardo DiCaprio was the first person approached to star in Phillips’ standalone film, though that didn’t pan out.

Scott Silver will join Phillips as a co-writer on the film, which will delve into what it took for the Joker to become a mastermind criminal. Sources say the story will take place in the ’80s and have more of the look of a gritty crime drama than comic-book movie.

Like seriously, let’s fucking GOOOOO! As a lifelong Joker fan/psychopath this news is not only incredible but completely unexpected. I checked out on expecting ANYTHING from Batman movies the second that Alfred nodded to Bruce in Florence and although I held out 1% faith for the future, oh how grim it has been.

Suicide Squad was pretty much just “NOW 67 – That’s What I Call a Movie Soundtrack!” with very little Joker and Justice League was no better. It didn’t help that Ben Affleck was like “Yea, it would be awesome to not do this anymore” and essentially publicly begged for Batman to be killed in the next movie. That may still happen in Flashpoint… But the goods news is Joaquin Phoenix is here to the scarred rescue!

He can be crazy, quiet, insane, loud, pathetic, strong, entrancing and despicable all at the same time. And he’s no longer shitting onto floors? Might have to bring that back for the method. I hadn’t paid attention to this “Joker Origin Story” when it was first announced because the actors rumored were trash picks and Todd Phillips was directing…

He hasn’t had a hit since 2009 and has 0 movies with a similar tone to this. Honestly I thought the only thing that could interest me was grabbing someone like Willem Dafoe, or myself, but how wrong I was. Not that we aren’t both extremely qualified… 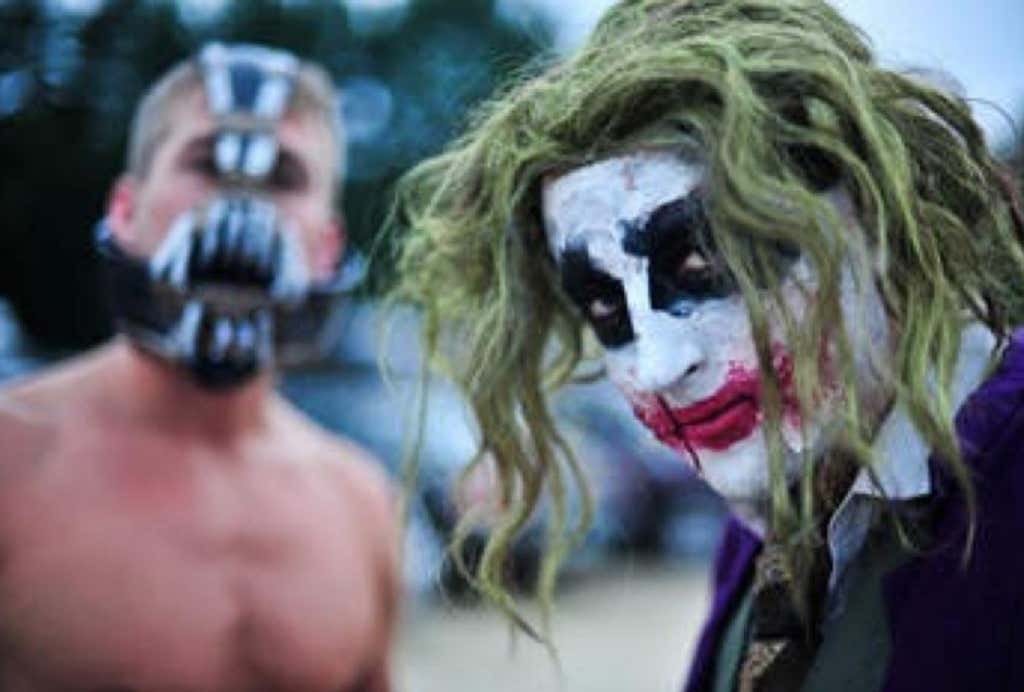 (Nashua Telegraph) – One of the “Jokers,” Devlin DZmura, made sure he would be ready for the Part 3 debut. “I watched ‘The Dark Knight’ twice today,” he said, sitting in the bed of a pickup between “Batman” and “Bane,” who were Tim and Corey, respectively. “Had to get ready. He’s probably the best character ever.”

DZmura, who said with a laugh that he plays the Joker “because I can identify with him,” has been donning his Joker persona since he created it for the 2008 debut of “The Dark Knight.”

“I dressed up on a whim, and it was the best experience I ever had,” he said. Reprising the role Thursday was a no-brainer, he added. “Hey, you only get so many opportunities for midnight showings.”

But I’m not even upset they didn’t call me for a screen test and more than happy to hand over the reigns to Joaquin. This movie is gonna be separate from everything else DC has made, including Leto’s Joker AND Batffleck, and that’s really all the foundation you need even for a hard-to-please-psycho, like meeeeeeee.

I’m confident that Todd Phillips knows he needs to hit a home run, both for himself and the legion of nerds, and I think his biggest advantage is this is something we haven’t seen before at all. No Joker origin story has ever lasted more than 5 minutes on screen (although shout out to Mask of the Phantasm as being the best so far and quite possibly the #1 Batman movie ever) and we’ve never seen the Clown Prince operate that crime by himself. No Batman. No Harley. Just the yucks folks!

If Todd needs a backup dancer I’m more than happy to oblige but Joaquin should have this covered. Also this better be fucking Rated-R you goddamn Warner Bros motherfuckers.