As is the case after every trade deadline, there will be a million columns about who won it and who lost it. The Cavs appeared to win because they picked up some decent players, shed a few headaches, and most importantly made LeBron happy. Non-Eagles fans won because #NBATwitter absolutely drowned out every Eagles Super Bowl parade tweet not involving Jason Kelce.

But make no mistake about it, Woj was the big winner of today’s trade deadline. I’ll admit it. Myself, like many others, have noticed that Shams Charania has been sneaking in Sham Wows right ahead of Woj Bombs. Scooping our boy Woj like ice cream every chance he got. I’ve always stayed loyal to Woj because he was my guy first and Woj Bomb is just so fun to stay. But after this trade deadline, I was thinking about becoming a Shams guy. I would set Twitter alerts for him when free agency kicked off and when it was deadline time. I wouldn’t burn my old Woj jersey or anything. But it would be placed neatly in the closet.

And then a funny thing happened. With today being the trade deadline, Woj turned back the clock to when he was @WojVerticalNBA and laid #NBATwitter to waste one timestamp at a, ummmm, time.

Shams started out hot with the scoop on the Willie Reed for Jameer Nelson trade.

Woj then answered back with a little appetizer for the chaos that was about to ensue. Pretty much an order of mozz sticks for the table just to whet the appetite and got #NBATwitter talking and hungry for more.

At this point, everyone’s ready for a 12 round, rock’em sock’em fight. The favorite Shams tasted his own blood, so everyone was expecting retribution. (Speaking of fights, buy Rough N Rowdy 2 now before the price doubles on fight night next Friday!)

But what happened next, was the most vicious, unfair fight I have seen on Twitter maybe ever. Even the infamous Teigen vs. Portnoy bloodbath doesn’t hold a candle to this.

Woj unleashes a series of tweets where the Cavs completely revamp their roster. 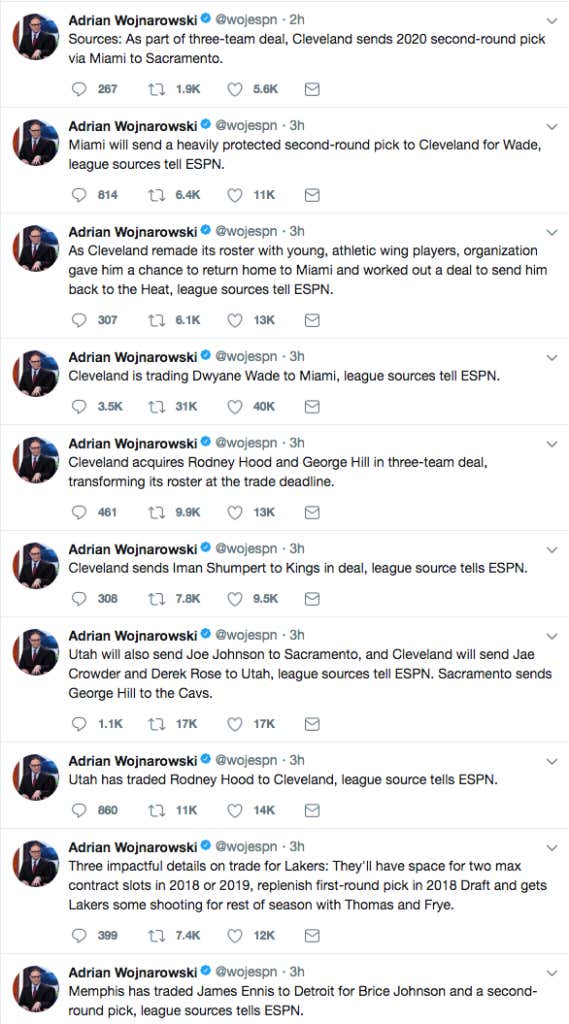 The NBA world is in shock. Twitter is losing its fucking mind. I blogged about LeBron James recreating the baptism scene from The Godfather because it was such a wild turn of events about one of the league’s premiere teams.

Meanwhile this was Shams’ Twitter feed during all those tweets:

Shams went radio silent for an hour during the biggest roster move day of the season. Woj buried Shams alive, dug him up, killed him, then reburied him all in that hour’s time. I don’t know if Shams forgot his Twitter password and got locked out of the app, ate something bad for lunch and was puking his guts out, was making a Hells Bells video, or just froze up and turned into Mr. Krabs Meme once it became clear his old mentor was stronger than ever and let the Woj Bomb avalanche wash over him. And I don’t know what got into Woj. Did they install some new super internet WiFi connection in Bristol? Did he get new sources? Did he kill Shams’ old sources? The world may never know.

Once the dust settled from that Woj Bombing, Shams answered back with this.

You cannot, I repeat CANNOT answer back to that Woj carpet bombing by tweeting about guys named Bruno Caboclo and Malachi fucking Richardson. As a fan of Bruno Mars and Malachi’s school Syracuse, I guess both of these players are kinda my guys in some weird way. But those optics are as bad as it gets. Shams was even reporting news about Derrick Rose getting waived after he never reported anything about him being shipped to Utah.

And then beat him to the Elfrid Payton deal

Shams did get a scoop on the Sheldon Mac trade.

But he’s so irrelevant, Woj never reported it while people thought Shams misspelled Shelvin Mack’s name and questioned if Mac was a real player. 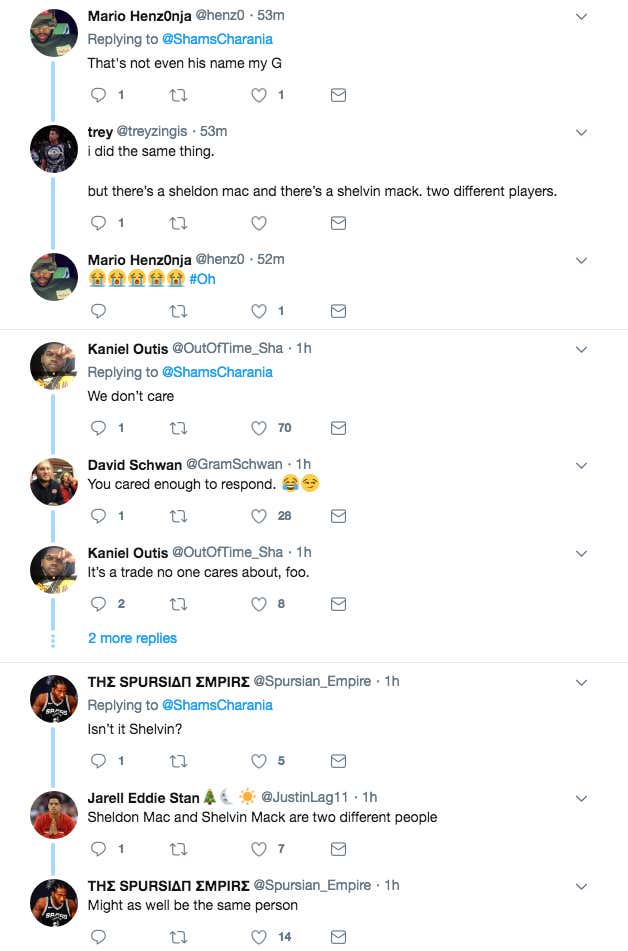 In the end, that was the biggest beatdown I’ve seen a mentor give his apprentice in years. It was pretty much the Obi-Wan vs. Anakin fight from Revenge of the Sith. Woj was the mentor, Shams was the apprentice that grew into a powerful force, and the mentor cut his apprentice in half and left him in a smoldering pile of ash.

^^^Blame Jay-Z taking down every copy of this song that’s not on a music app as the reason I embedded a Spotify link.^^^