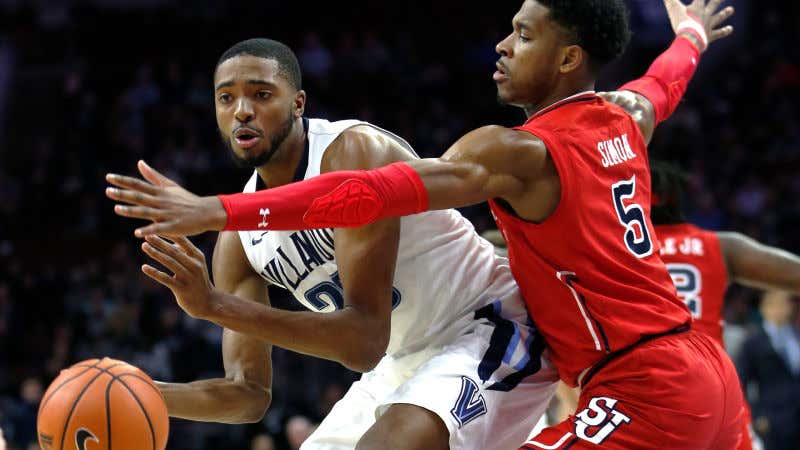 Just your every day Wednesday in February in college basketball. There were upsets and great games all around so we’re not going to waste any time and just run through some of my thoughts and reactions. I mean how many times do you see the No. 1, 3 and 8 teams lose at home? The No. 2 team having to come from behind in the second half? Shit, even Creighton had to hit a three with a few seconds left to steal a win against DePaul. It was an absolutely awesome night. I mean, look at this stat:

If this is a little random and all over the place, well I’m not really sorry, but a lot was going on tonight. There’s only one way to start tonight though and that’s the best thing I’ve seen all day.

That Andrew Jones from Texas continuing to get buckets while he battles cancer. This is awesome, only way to put it. I hope we get to see him get buckets in burnt orange again sometime in the near future.

Well that was some sort of week for St. John’s, eh? A home win against Duke before going to Philadelphia and beating Nova. Now, I’ll get to St. John’s in a second, but the obvious story here is the loss by Villanova. You may consider this a hot take, but I’m not overly worried about Villanova. They played this game without Eric Paschall who was out with a concussion and obviously still didn’t have Phil Booth. In the grand scheme of things the loss won’t mean much. They missed a bunch of wide open shots, which is something to remember with this team. They still need to hit jumpers in order to win, but the biggest problem for them is still on the defensive side of the ball. They were just getting beat in ISO sets by Shamorie Ponds. I know it’s been a couple of months, but man, imagine how good this St. John’s team would be with a healthy Marcus LoVett? Guarantee they wouldn’t be 1-11 in the Big East.

On Sunday you’ll hear ‘No. 1 overall seed Virginia’ after comeback victory at FSU

While I do think Villanova will still be a No. 1 seed on Sunday during the top-16 reveal, there will be a new No. 1 overall seed. That’s Virginia who did probably what some of the doubters was still looking for. They came from behind using their offense and did it on the road. This team is incredibly balanced and that backcourt is all sorts of fun. While it seems like Ty Jerome and Kyle Guy continue to get into a dick measuring contest of who can hit the dagger 3 late in games, Devon Hall led the way tonight with 17. Virginia is now 23-1 on the year with the lone loss coming at West Virginia. This is the best offensive team Tony Bennett has had at Virginia despite not having that guy like a Joe Harris, Malcolm Brogdon or Justin Anderson. The reason for that is because of the backcourt and ability to attack and beat you off the bounce, but along with that is a guy like DeAndre Hunter who allows them to play more athletic.

Marquette’s refusal to fold was impressive

Marquette has been a mess the last few games. The Golden Eagles lost their last four games and five of their last six. That all changed when they went into Newark and beat a good Seton Hall team. That was a vital win in order to keep NCAA Tournament hopes alive for Marquette. For a team that looked ready to quit on the year, that’s damn impressive.

Speaking of impressive, Ohio State got the win of the night at Purdue

Purdue led for the majority of the game. Ohio State is without Kam Williams. Purdue pushed the lead to 12 with under 10 to go. Somehow though, Tate and Bates-Diop were able to will Ohio State to win. What Chris Holtmann is doing is absolutely unreal. Ohio State is now your leader in the Big 10 – I know they are co-leaders with Purdue, but they hold the tie breaker. If you’re a Purdue fan, there’s a takeaway from this game that should have you scared going forward. There are serious rebounding issues and that’s how Ohio State got its game winner. You can attack Purdue on the offensive glass – especially if you’re putting Haas in ball screens like teams like to do. That’s part of the problem for Purdue playing the two small guards and it happened tonight.

Kansas State is one of those teams sitting squarely on the bubble and it got the important road win that those teams are always looking for. This time all five starters scored in double figures as it was able to win at Texas despite Mo Bamba going for 18 and 12. Barry Brown continues to be the most important player on Kansas State and today he dropped an 11/6/6 stat line. In the 3 games prior he combined for just 19 points. He doesn’t have to go get 30, but he needs to consistently be a threat to do something.

Virginia Tech – yet another bubble team – got a vital win tonight. Granted, this game was at home and Tech is a way different team at home, it’s still a win. Justin Robinson was the star tonight for the Hokies dropping 32 points. NC State was able to afford this loss, as they should still be around a No. 10 seed. However, Virginia Tech needed to win this game with games against Virginia, Duke and Clemson in 3 of its next 4.

Texas A&M/Auburn was all sorts of weird, but A&M got the road win

That game was all sorts of weird, especially the last minute. A&M blew a massive lead it had in the first half while this is something Auburn has done before. However, the last minute there were plenty of reviews and then weird foul calls. The first one came from A&M as it fouled 90 feet away while up 2 with 10 seconds to go. Then with a tie game there was a controversial (but correct) block call on Auburn. A&M was able to hit one free throw to go up 81-80 before Mustapha Heron’s shot clanked off the iron. This was the third straight win for A&M to get to 5-6 in the SEC with a home game against Kentucky on Saturday. They seem to be turning the corner at the right time here and this win should continue to keep them safely int he NCAA Tournament. As for Auburn, this is a tough loss as they were in the running for a No. 1 seed, but a home loss won’t help them there.