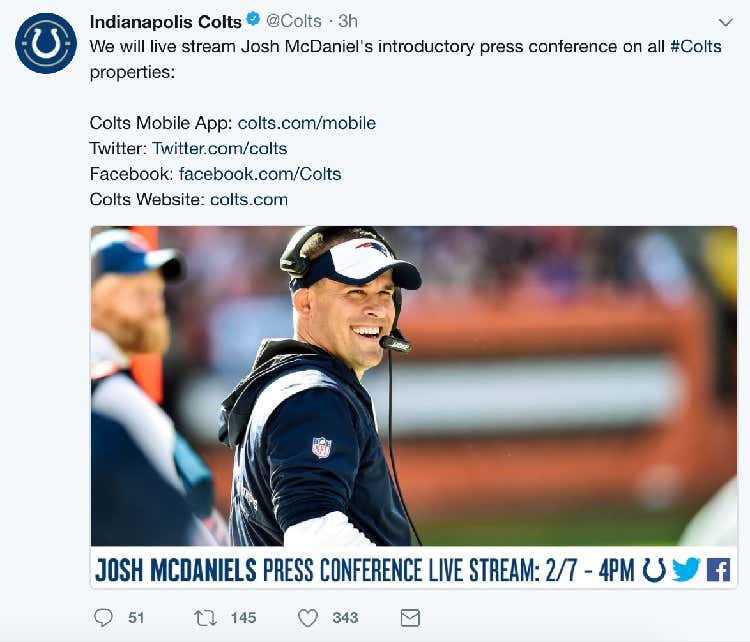 So it would appear that when you’ve got an agreement in principle to take over as head coach of a team that has been waiting for you for weeks and has a press conference scheduled for Wednesday and on Tuesday night decide to ditch them like they’re Glenn Close in Fatal Attraction, you run the risk finding them in your kitchen wearing your shirt and boiling a bunny on your stove.

[M]ake no mistake: He’s one of the biggest frauds in the NFL. … What becomes of that rat is of no concern to me, not anymore, now that he has removed himself from our city and saved the Colts from themselves. … Josh McDaniels is a selfish little jerk, and he has succeeded only with Bill Belichick as his head coach and Tom Brady as his quarterback. …

In the long run, the franchise will be better with someone else, anyone else, as head coach. That’s not easy to see right now, I know it, but if McDaniels can be this destructive, this selfish, this fraudulent in three weeks as de facto head coach of the Colts, imagine how much damage he would have done here in three years.

ESPN, while not necessarily doing all the name-calling, nevertheless had some harsh words:

At least some teams, owners and assistant coaches will wonder whether they can trust McDaniels’ word. … [S]ome members of his presumptive coaching staff signed deals to join him. …

The Colts should be commended for honoring their commitments to those coaches, but it’s not an ideal situation given that they weren’t brought in by the team’s next head coach.

Reggie Wayne says the Colts feel “hoodwinked.” A great word. Especially coming from a guy who got a $5 million bonus to come to New England and left camp after two days.

SI made with the obvious GIF:

The obvious, low-hanging fruit jokes were not far behind:

But once again, Patriots fans won the Internet in the Battle of McDaniels:

So congratulations to Josh McDaniels. He’s not only gotten the job security he wanted by staying in New England, exacted final retribution for Deflategate and set the Colts back at least another season as they try to claw their way back to respectability, he’s done the impossible. He’s made himself more hated than Bill Belichick.