Darryl Sittler was born on September 18, 1950, in St. Jacobs, Ontario. He was selected with the eighth overall pick in the 1970 NHL draft by the Toronto Maple Leafs, after playing with the London Knights of the OHL. It would not take Sittler long to become a fan favorite in Toronto, as he became the Maple Leafs top scoring threat. Prior to the 1975/76 season, Darryl Sittler was named the team captain, replacing Dave Keon after he jumped to the WHA after a contract dispute.

Heading into a Friday Night Game at the Maple Leaf Gardens, the Toronto Maple Leafs were struggling, with a 1-4-2 mark in their last seven games. The Bruins meanwhile were riding a seven-game winning streak had jumped to the top of Adams Division with a 15-1-1 mark over a 17-game stretch. Toronto’s struggles led their verbose owner Harold Ballard to call out his captain Darryl Sittler for a lack of production.

The Boston Bruins were on the verge of welcoming back a familiar face, as they announced that goalie Gerry Cheevers was returning after playing in the WHA. Cheevers was to share the goaltending duties with Gilles Gilbert, meaning Dave Reece was going to be the odd man out. Bruins coach Don Chery gave Reece the start in Toronto, knowing he was about to be sent down to the minors.

The historic night started with Darryl Sittler dishing out a pair of assists in the first period as goals by Lanny MacDonald and Ian Turnbull gave the Maple Leafs a 2-1 lead after one period of play. In the second period, the action began to heat up for Sittler as he scored his first goal after a brilliant rush up the ice by Borje Salming. Sittler returned the favor, by sending his third assist to Salming 34 seconds later. Darryl Sittler did not need any help with his next point, stealing the puck at center ice and skating past the blue line where he ripped a 50-foot short past, Dave Reece. Darryl Sittler completed the hat trick, by jamming home a pass from George Fergusson after coming on the ice as an extra attacker, during a delayed penalty. With another assist on a goal by Salming, Darryl Sittler had five points in the second period, and with three goals and four assists stood one point away from Maurice Richard’s single-game record for eight points as Toronto held an 8-4 lead during the second intermission. All eyes were on #27 as the third period began, needing one point to tie the single-game record, Sittler got his fourth goal of the game by stuffing home a pass from Borje Salming at the side of the goal crease just 44 seconds into the final period. Darry Sittler scored his fifth goal and broke Richard’s record for points in a game that lasted 32 years with a 40-foot wrist shot that caught the helpless Reece off guard. The final goal of the night was an accident and summed up Sittler’s ten-point performance, as he was credited with a goal after the puck went in off Bruin Defenseman Brad Park’s skate. Darryl Sittler, who now had six goals and four assists was simply trying to pass the puck from out behind the Bruins net.

The superlatives from the ten-point game have never stopped amazing anyone who examines the historic game. Not only did Sittler have six goals, but he recorded a natural hat trick in the third period, scoring the last three goals in an 11-4 blowout win. Darryl Sittler would go on to finish the season with 41 goals and 59 assists, becoming the first player on the Maple Leafs to have 100 points in a season. 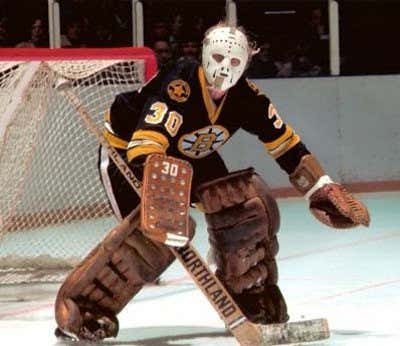 Dave Reece remained in net the entire game, as the Bruins regular goalie Gilles Gilbert was dealing with a sore knee, while Gerry Cheevers did not have enough time after signing to meet the team in Toronto. It would be the final appearance Reece would make in an NHL game.