StarWars.com- David Benioff and D.B. Weiss are going from Winterfell to a galaxy far, far away. It was announced today that Benioff and Weiss, creators of the smash-hit, Emmy Award-winning television series Game of Thrones, will write and produce a new series of Star Wars films.

These new films will be separate from both the episodic Skywalker saga and the recently-announced trilogy being developed by Rian Johnson, writer-director of Star Wars: The Last Jedi. “David and Dan are some of the best storytellers working today,” said Kathleen Kennedy, president of Lucasfilm. “Their command of complex characters, depth of story and richness of mythology will break new ground and boldly push Star Wars in ways I find incredibly exciting.”

“In the summer of 1977 we traveled to a galaxy far, far away, and we’ve been dreaming of it ever since,” Benioff and Weiss said in a joint statement. “We are honored by the opportunity, a little terrified by the responsibility, and so excited to get started as soon as the final season of Game of Thrones is complete.”

No release dates have been set for the new films, and there have (thankfully) been no sightings of White Walkers around Lucasfilm.

HOLY FUCKING SHIT. HOLY FUCKING SHIT. HOLY FUCKING SHIT. I’m trying not to geek out over Star Wars news like Robbie Fox and the other Star Warriors do but HOLY FUCKING SHIT. This news is like your two best friends hooking up to hopefully create a beautiful baby together. I’ll admit I was excited about Rian Johnson doing The Last Jedi because I loved the Ozymandias of Breaking Bad and that DID NOT go as well as I hoped. I’m on the record that The Last Jedi ruined Star Wars for me and to say I am not excited for his series would be an understatement. But the track record of a guy who made one episode I loved versus a duo that made my 2nd favorite TV series ever, admittedly with a gigantic hat tip toward George RR Martin, is quite different.

Now I’m sure some people are rolling their eyes that there are already even MORE Star Wars movies planned out. But Disney is shoving one of these down our throats every year until they can figure out how to shove two down our throats every year. I love this as a Star Wars fan and a Benioff & Weiss fan. B&W were given a huge, expansive world with great stories and only created the biggest show on the planet that now touches all parts of pop culture. The thought of them having the entire Star Wars universe at their fingertips with Disney’s war chest behind them will cause a boner (man or lady’s variety) that could last years. No more cramming important seasons into 6 episodes or only showing 20 seconds of a dragon because of budget concerns like the Wilpons own HBO. People have to take out a 2nd mortgage for a week at Disney World. Let them and their $8 churros pay for only the finest crazy ass special effects. If Benioff and Weiss want to mix in some incest, Star Wars had brothers and sisters smooching back in 1977 like they were at a Brady family reunion.

And to those people that don’t like the writing of Benioff and Weiss, just let me have this. It’s been a rough few months for me as a Star Wars fan. If this series sucks, you can blame me. Benioff & Weiss will be my Emeka Okafor and Caron Butler.

Now I turn the floor over to my Star Wars compatriot Robbie who shockingly isn’t a Thrones guy but wanted to weigh in with some thoughts. 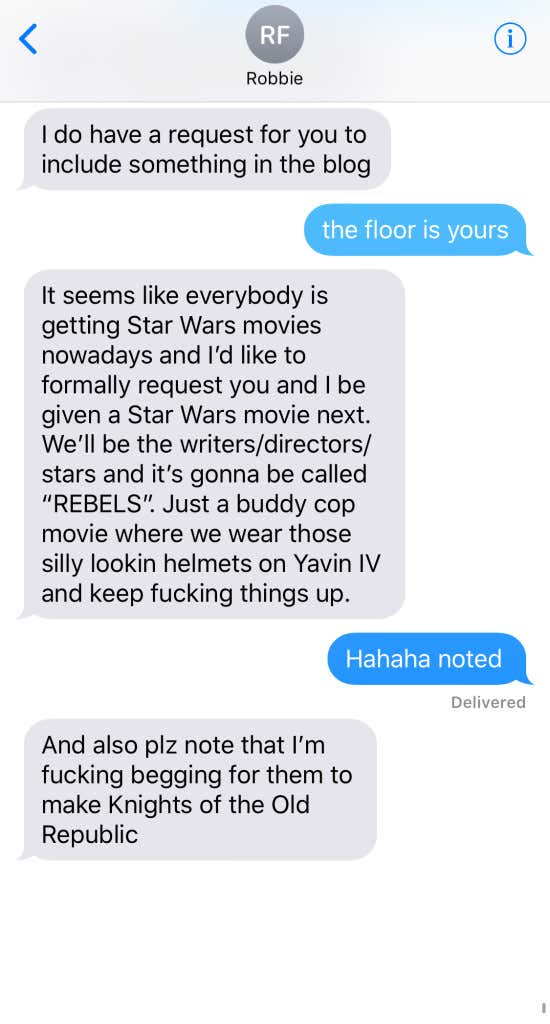