You hate to see it. Poor fella let his guard down for one second and he catches a case of the gay. I guess that’s what he gets for drinking himself into a blackout on a Monday. I’d hope the bar would face some sort of repercussions for over serving him but chances are they won’t. They’ll continue to serve and sexually confuse every college student that walks through that door. In all seriousness, it’s 2018 and everyone seemed to have  a good sense of humor about it but HOW could he not tell that was a guy? She’s twice his size and was laughing as he was trying to kiss her. 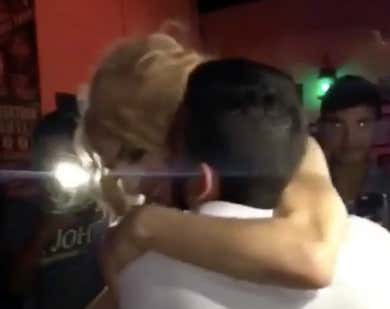 Did the thirty cameras pointed in his face not give it away? The Kim Zolciak wig? The arms? What an idiot. Shout out to whoever was in the wig, it takes balls/ovaries to go out to a COLLEGE bar and pull a move like that. There was obviously some sort of spark between them otherwise he wouldn’t have taken the risk. Whether or not anything comes out of it is anyone’s guess.