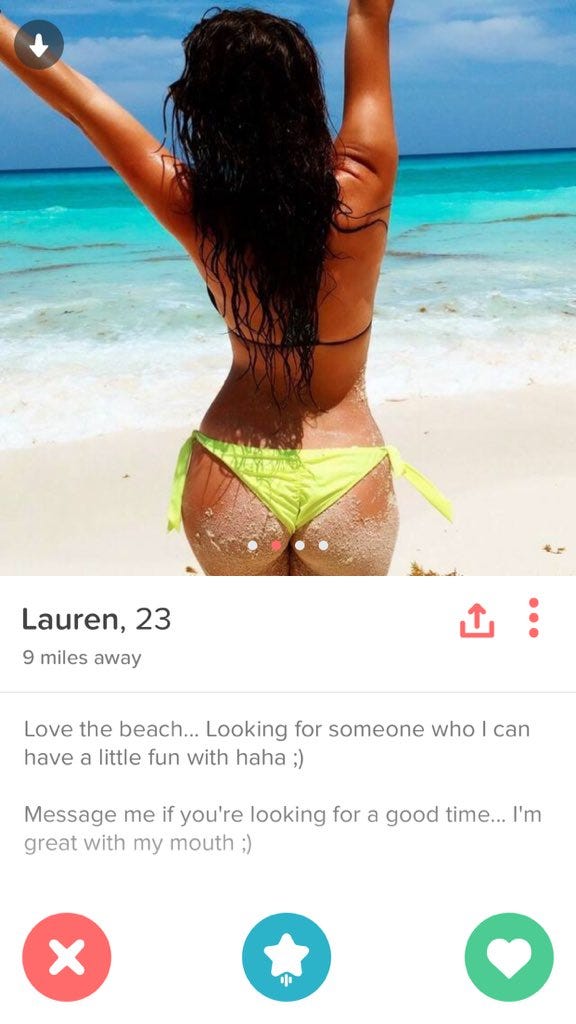 Newsweek — Tinder is being accused of ageism for charging people over 30 an extra $5 to $10 to use its dating app.

A California court has reversed a judge’s previous decision to stalemate a lawsuit filed against Tinder. The suit, filed by Allan Candelore and an assumed class of California Tinder users over 30, claimed Tinder’s age-based fee was in violation of California’s Unruh Civil Rights Act and Unfair Competition law.

Tinder has previously argued that the difference in price should not be viewed as discrimination toward older users but rather a financial help to those who are younger and less able to afford a more expensive monthly purchase.

“Younger users are just as excited about Tinder Plus, but are more budget constrained, and need a lower price to pull the trigger,” Tinder’s Vice President of Corporate Communications Rosette Pambakian said in 2015.

First things first, I typed “Tinder” into our image database and saw that screenshot and very much enjoyed it, so figured you would too.

Moving on. Tinder doesn’t want a bunch of old fucking people crawling all over the app? Yeah no shit. This thing exists for the sole purpose of having people look at pictures of other people, decide if they want to fuck them, and swipe one way or the other based on that decision. All in the matter of less than a second. Don’t have time for old people flooding the scene. Old people are slow and gross. Tinder too is kind of gross but also a super efficient, simplified bar/nightclub all digitally wrapped up and presented to you on your phone. Last time I checked, most bars/nightclubs operate for the younger crowd. Sure, if you’re old there are designated old places for old ass people to congregate. It’s not agism it’s science. If old people want to get it they need to get it on some separate, old person Tinder. We* simply just can’t have a bunch of old, pregnant bitches running around normal Tinder.

*I am actually too old for Tinder too according to their cutoff. Bummer.