I’ll admit that I thought this was Childish Gambino at first because it sounds just like him and it was fucking awesome. But I was wrong. The blog will not changed because Internet Law states I cannot edit it after getting tricked. But I stand by everything I said before I found out the truth. I will now serve my penance.

I know it sounds ridiculous, but this song alone makes me feel significantly more confident that Solo is going to be actually good. Yeah the trailer was decent and all. But that’s what trailers are supposed do. Make movies look good in 120 seconds of less no matter how shitty they may actually be. But this song and music video remind me just how awesome Donald Glover is. Simply having him on the silver screen should give the movie a 15 point bump on Rotten Tomatoes by talent osmosis alone. Once a Han Solo movie was greenlit, they needed to nail two roles: Han Solo and Lando Calrissian. Based on that trailer alone, it seems like they may have hit at least a double with Han. But casting Glover as Lando is looking like it could be a bomb hit all the way into Tattooine’s second sun, which to be honest is about how far Billy Dee Williams crushed the role.

As that last line proves, it’s not easy to make Star Wars references seem even remotely cool. But Gambino does it nonstop. I mean “I’ll get up in your girl as if she was a Tauntaun” is some nerdy Biggie-level stuff. A little blindness + being frozen in carbonite double entendre was appreciated. And the “Asian girls up in my Magic Kingdom like Orlando” and Randal from Monsters Inc lines were a pleasant treat for me as a Disney movies fan and I’m sure the people signing the checks at The Mouse were happy as well.

And if all that wasn’t enough, Gambino had the gumption to throw a Lobot reference in right at the end. 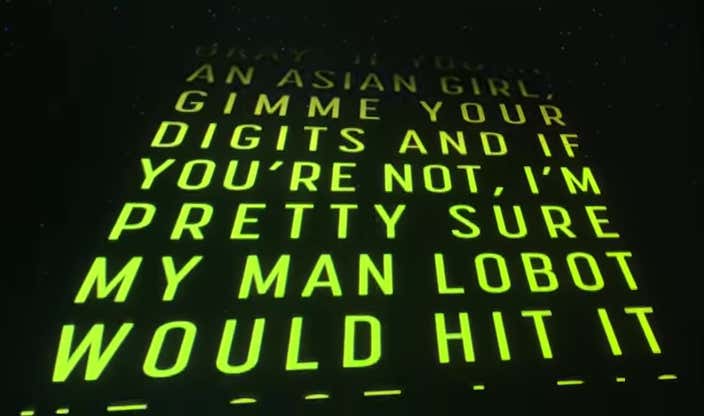 When Childish Gambino puts your name on wax about how you sling that good Bespin dick.

Fuck it, we need a Lando movie. Spring 2021. And maybe throw Glover somewhere into a Last Jedi Special Edition. Maybe he can save that flick retroactively.