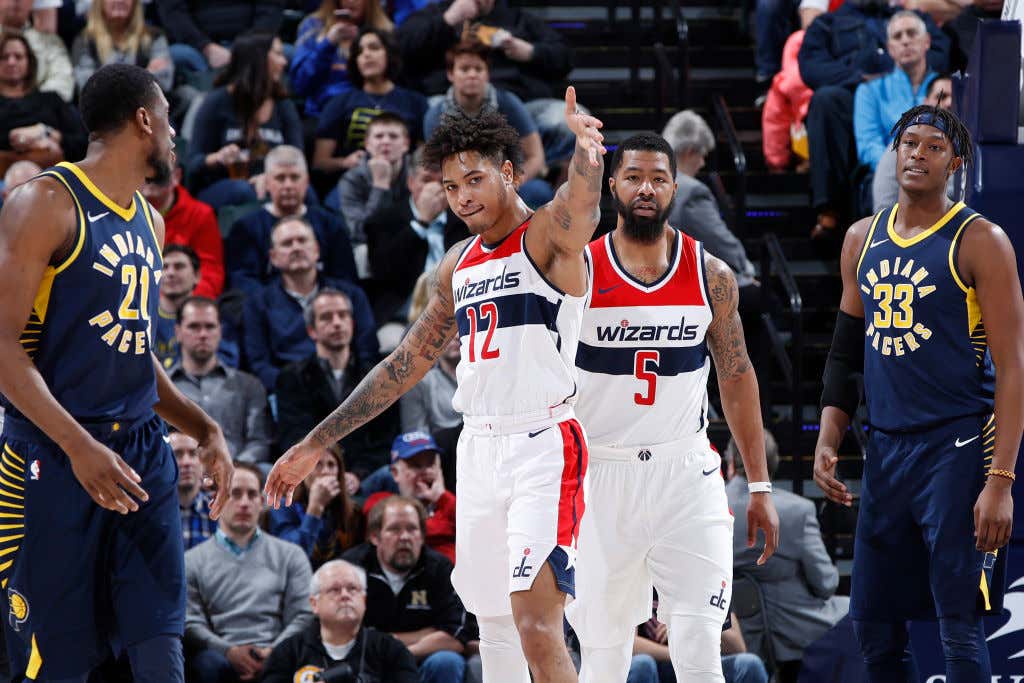 Happy Tuesday everybody and welcome to another edition of Last Night In The NBA where we catch you up on everything that happened from the night before in the Association. We had 7 total games last night, some on which included teams continuing their strong play, there were some upsets, and there were some milestones, all in all making for a pretty entertaining Monday night of basketball. If for whatever reason you weren’t able to watch, here’s what happened.

If we’re going to talk about teams streaking, we may as well begin with the Detroit Pistons, who have now won four straight and three since Blake arrived on 1/30. A wire to wire home win over a good Blazers team, the Pistons are now tied with PHI for the last playoff spot and within striking distance of the 5 seed if things get crazy.  There were questions when this trade happen as to how Blake and Drummond would fit next to each other, and I dunno call me crazy but this looks pretty good

It certainly helps when the rest of the team chips in, and 45 points from the bench certainly qualifies. The Pistons finished the game with 50/50% splits and had 36 assists, which was a season high for them. Anthony Tolliver was great leading that second unit, and he’s really a marginal player at this point but he is also the focus of a pretty good GIF the Pistons use whenever he goes off. We got that last night

I will say, every new relationship has the honeymoon period and that’s probably what this is with Blake, but if it lasts all the way until they secure a playoff spot and potentially match up with a struggling CLE? I dunno anything can happen.

For POR, this has been a pretty brutal East Coast trip. They had won 7 of 8 before heading East, and then went on to get destroyed by TOR, lose a heartbreaker to BOS, and get blown out by DET. They’ve slid to 7th in the West but have gotten a bit lucky because OKC has lost 4 in a row and NO has lost 2 in a row, so they are very much still in play for seeds 5-7. The encouraging thing about that is their 14 wins on the road are more than the 4 teams currently ahead of them in the standings, and we all know these cross country trips are weird.

Hard to beat a team playing well when you finish with 39/30% splits and Dame/CJ combine for just 34 points on 14-34 shooting.

The early reports of the Wizard’s season taking a huge hit with the loss of John Wall seem to have been a bit of an overreaction Mostly because they’ve now won 5 in a row and are playing their best basketball of the season. How could this be? Well because they are moving the ball better than they ever have before. See for yourself

Now this is not a “The Wizards are better w/o John Wall” stance. That would be stupid. I just want to commend the Wizards for dealing with this injury and adjusting how they play in order to be successful. That’s impressive to me. Other guys have had to step up and produce with Wall out, and what better way to do that than to play the right way and make it easy.

When you pass like this you see direct results in your FG%, and the Wizards shot 54% for the night which isn’t too shabby. Beal led the way with 21 points

but things were extremely balanced. Eight total players in double figures, the bench combined for 50 of the 111 AND it happened on the road. Those are two pretty rare things for the Wizards if you’ve watched this team lately.

For IND, they’ve been a little inconsistent after winning 4 of their last 5, but they’re still in solid shape for a 5-8 playoff spot which is not something many people predicted to start the year. With no Oladipo, somebody was going to have to step up in terms of scoring, and that guy was Bojan Bogdanovic who had 29 on 9-15 including 5 made threes

Perhaps a little too much Lance (4-14) but the Pacers issues are showing up on the defensive end. They are jsut giving up wayyyyy too many points latekly. They haven’t held a team to under 100 all too often over their last 8 games, and their record reflects it.

A surprise result in this battle of Florida franchises. This was just the 7th road win of the year for the Magic, and overall just their 4th win in their last 16 tries. Not great! But this is why the NBA is fun, because you never know when you may see an upset, and make no mistake, even if MIA is a 7 seed, this is still an upset.

and is a guy that has really helped his potential market for a trade/buyout situation. Over his last 5 games Hezonja is averaging 15/4 on 53/56% splits while making 2.8 threes a night. That can help someone I bet and the Magic are clearly done with him after this season.

As a team ORL shot 48/43% and did well by only turning it over 11 times. If you’re looking for a way to win on the road against a good team, that’ll do it

For MIA, I think we all can agree their City jerseys are incredible. I am of the line of thinking that if you look good you play good, and there were a bunch of Heat guys that played well in this game. Bam and Whiteside were absolute beasts

Sadly, the Heat are streaking in the wrong direction, now losers of 4 straight. They have a 2 game buffer over PHI/DET for the 7 spot so it’s not time to panic or anything, but the Heat certainly need to snap out of it if they want to avoid the lottery.

So the Jazz are having a lot of eye popping wins lately. Not because they beat the Pelicans, but because of the 133 points! Remember, this was a team that reallllly had issues scoring the ball earlier in the year. Well, they’ve now won 6 in a row and here are their points scored in their last four wins: 129, 129, 120, 133

What the hell is going on?

Well last night they shot 58/66% and this was on a night where Donovan Mitchell went 1-6 for 2 points. Watching UTA play, it really sucks they’ve had such a brutal year of injuries because this team actually looks pretty damn good. They still have a ways to go to catch the 8 spot (3 games), but if they’re shooting the ball like this, don’t count them out

I know there are rumors of moving Rodney Hood, but maybe the Jazz should just stand pat and ride things out? Unless they really don’t want to keep him, I say now that you’re at full health make a run at the playoffs.

For NO, after a strong Pelicans debut, Mirotic struggled filling in that starting spot going 2-8 and having just 5 points, and to be honest the UTA front line did a great job of containing AD, who only had 15/11 on 6-16. The story for them on the offensive end was Rondo and his 18/8 on 7-13

and Jrue Holiday and his 28

but yeah, you can’t give up 133 points at home. Just can’t do it when you’re fighting for your playoff lives. NO has now lost 2 in a row and have the Clippers breathing down their neck just 0.5 games back.

I hope you guys stay up to watch DEN play, because their offense is electric, especially at home. They are just loaded with guys who can put then ball in the hoop. As a team finishing with 56/52% while also making 18 threes is some Warriors shit (who they just beat), and the good news for DEN fans is all these guys are young for the most part.

But don’t forget about Jamal Murray and his 18 points (4 made threes) or the solid production from the DEN bench, which three guys in double figures and as whole unit going 17-28. Not bad.

Winner of three straight the Nuggets have seen themselves shoot up the standings to 6th and their 22-7 home record sure does help with that.

How many times this year have the Kings come back from 20+ points to win? I’m not sure but I bet we can count it on one hand. Well, last night was one of those nights

Also, it’s probably between SAC and POR for the best social team account in the league, these were great

Good for you SAC, that was actually pretty exciting.

For CHI, this is perfect. You don’t need to win this game let alone be up by 20 in the first place. It’s all about the lottery. I suppose it also helps to not be mad about blowing a huge lead when you see some of the production from their young talent.

Zach LaVine was awesome, with his 27 points on 9-18 shooting including 4-8 from deep and the play where he killed a guy

and even with no Baby Dirk in the lineup, Bobby Portis filled in and did well, with 18/12/4. But these are all things we’ve seen before. I don’t think we’ve ever seen Robin Lopez get THIS fired up

Gallo is back, and he was great!

28 points on 9-13 shooting, it is a shame that the Gallo/Blake/Jordan trio didn’t really get a whole lot of time together this year, because who knows how that would have looked.

The Clippers won this game by going on a 13-0 run to close, something you don’t see too often

Is the plan still to blow this team up? They are in playoff contention, but you can’t trade Blake and then not follow through and trade everybody else. The Clippers are so fascinating because I’m not sure they totally know what they’re going.

and also shout out to Dirk for passing the 50,000 minutes mark. That is literally insane. Even more insane is did you know Dirk has missed just 43 games in his entire career? I didn’t until I saw that stat and it blew me away, especially being a 7 footer. 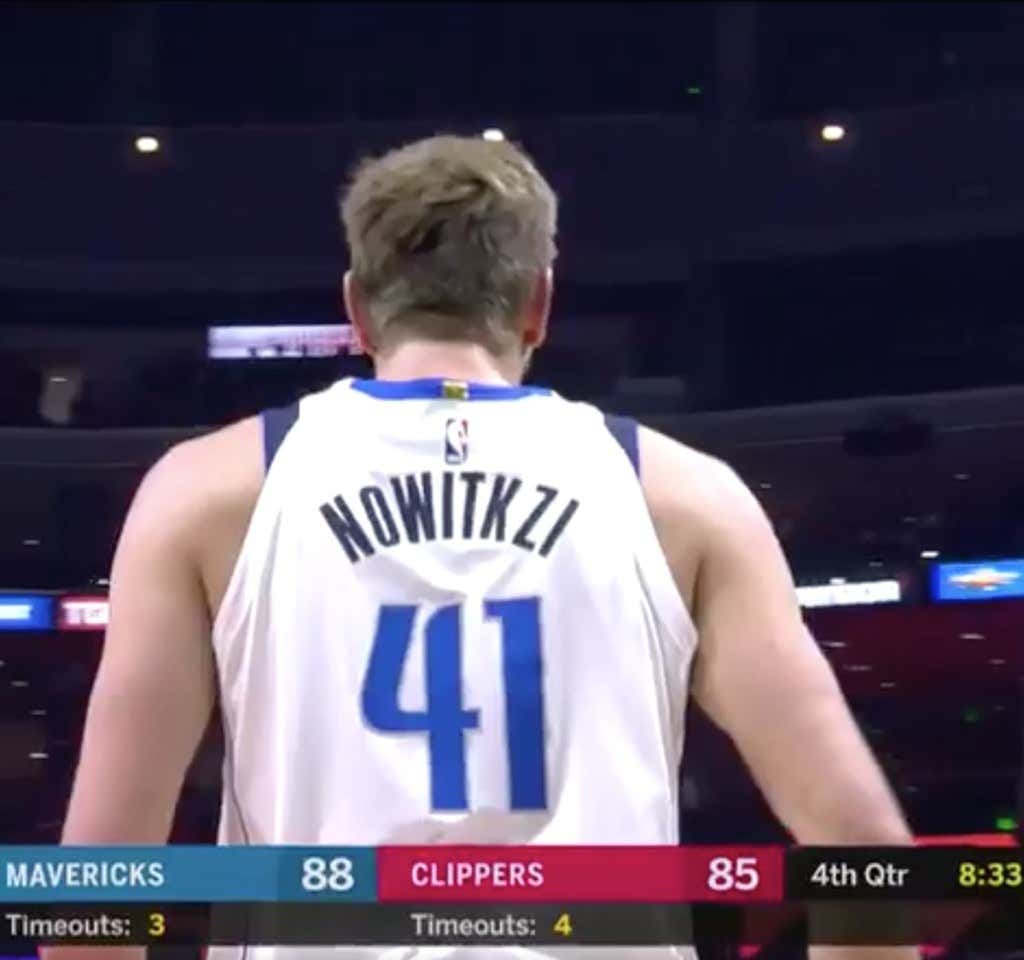 And that’s it! You’re now all caught up on everything that happened last night in the NBA. Things in no way slow down today with 8 games on deck, including BOS/TOR, MIL/NYK, WSH/PHI, OKC/GS, and for the real degenerates PHX/LAL late night. As always, check back here tomorrow and I’ll bring you up to speed.