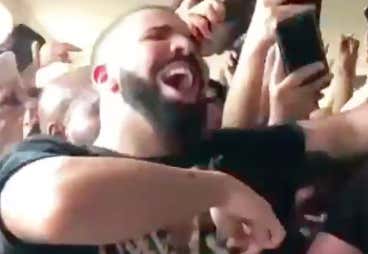 Source - Students at a high school in Miami got to spend the day with Drake when the rapper showed up to shoot a new music video on Monday (Feb. 5).

According to various tweets from students at Miami Senior High School, Drizzy was on school grounds to film a video for his latest single, “God’s Plan.” “

Drake also recorded a few shots walking around the campus and standing in front of the baseball field, as students could be seen with him.

The rapper also took some time to talk to the students, telling them, “I hope you all have a great year, I hope you go on to do incredible things.” He added, “And the best news of the day is that the bell is about to ring!”

While getting to see Drizzy and appear in a music video was a highlight for many of the students, the rapper also made a nice gesture to the school, donating $25,000 and announcing the school will get new uniforms made by him.

Man, the rap game has changed. It used to be all about murder and bitches. Rappers would film music videos in the streets or in their mansions or in bank vaults. I remember G-Unit filmed an entire music video of them stealing a car. If they had shown up to a high school for a shoot their street cred would’ve disappeared. Today street credibility takes a back seat to marketability. Enter Drake.  Not only did he put on a free viral concert for his biggest fans, he essentially became a really rich high school student for the day.

Best. Monday. Ever. As if the concert wasn’t enough he donated $25,000 to the school (pocket change) and bought them all custom Drake uniforms. Which I’m assuming looks like a looser version of the Elton John Grammy outfit. Regardless, it’s good to see rappers do good. I’m sure he made these kids’ day. It’ll be awhile before the music video comes out so for now this is all we’ve got. Enjoy.