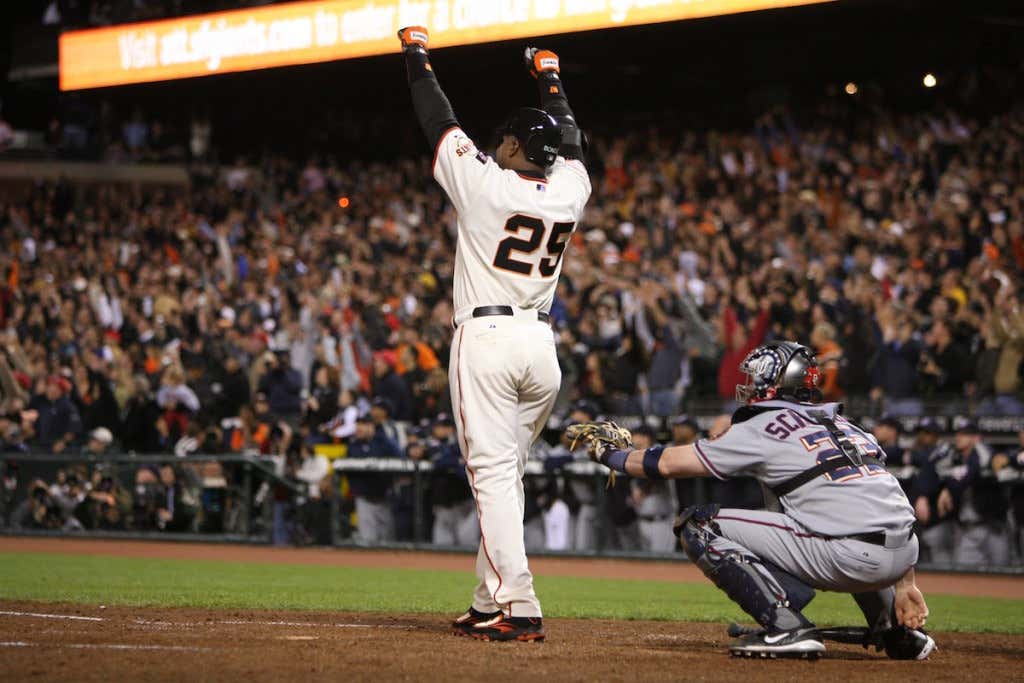 So, the San Francisco Giants tweeted this out with the eyes emoji and everything. Seems like they’re about to announce that they’re going to retire Barry Bonds’ number 25 this season. They haven’t issued the number since Bonds’ last season in 2007, which we’ll get to in a minute, so it was only a matter of time before they did this. Usually when teams retire a player’s number who is Hall of Fame bound, they wait until they make it to Cooperstown before they do it. That won’t be the case here.

On this past Hall of Fame ballot, which was his sixth year of eligibility, Bonds garnered 56.4% of the vote, slightly up from the 53.8% he got in 2017, but still shy of the 75% needed for enshrinement. I don’t know if the thought process here is that the Giants think that this will help his Hall of Fame case for the four tries that he has left, but it certainly can’t hurt.

Part of me is hoping that this announcement is that Bonds is coming out of retirement to play one more season. I mean, the Giants were tied with the Tigers for the worst record in baseball last year, their outfield combined for the worst OPS of any outfield in baseball, and even at the age of 53, you know Barry could still throw a jersey on and rack up an on-base percentage that’s north of .400, maybe even flirt with .500. That’s just what Barry does.

Thinking back on it, it’s absolutely bananaland that nobody signed Bonds after his final season in 2007. He filed a grievance against the league in 2015, claiming that the league colluded in their universal decision to not offer him a contract in 2008 and beyond. Somehow, an arbitrator ruled in favor of the MLB over Bonds in that case, and that was that. His career was over and he had no choice but to retire against his will.

You mean to tell me that all 30 teams looked at those numbers and collectively decided, “Yeah, this guy can’t make our offense better.” Bulllllllshit. He might’ve been dirty, but the league did him dirty at the end there when he was just 65 hits shy of 3,000 and 38 homers shy of 800. He would’ve gotten there, too. No doubt in my mind.

But that’s in the past now, as Barry awaits his call from Cooperstown, which some think might never come. I think it will. I think the voters are going to make both him and Roger Clemens sweat it out until their tenth and final year on the ballot before they put them both in. If they don’t, then that’s going to be a long and potentially unsuccessful road to the Hall, which would be unfortunate.

Regardless, that number 25 is going to get retired in 2018, as it should, and hopefully that’s one step closer to the Hall of Fame where he belongs. Roll the video.