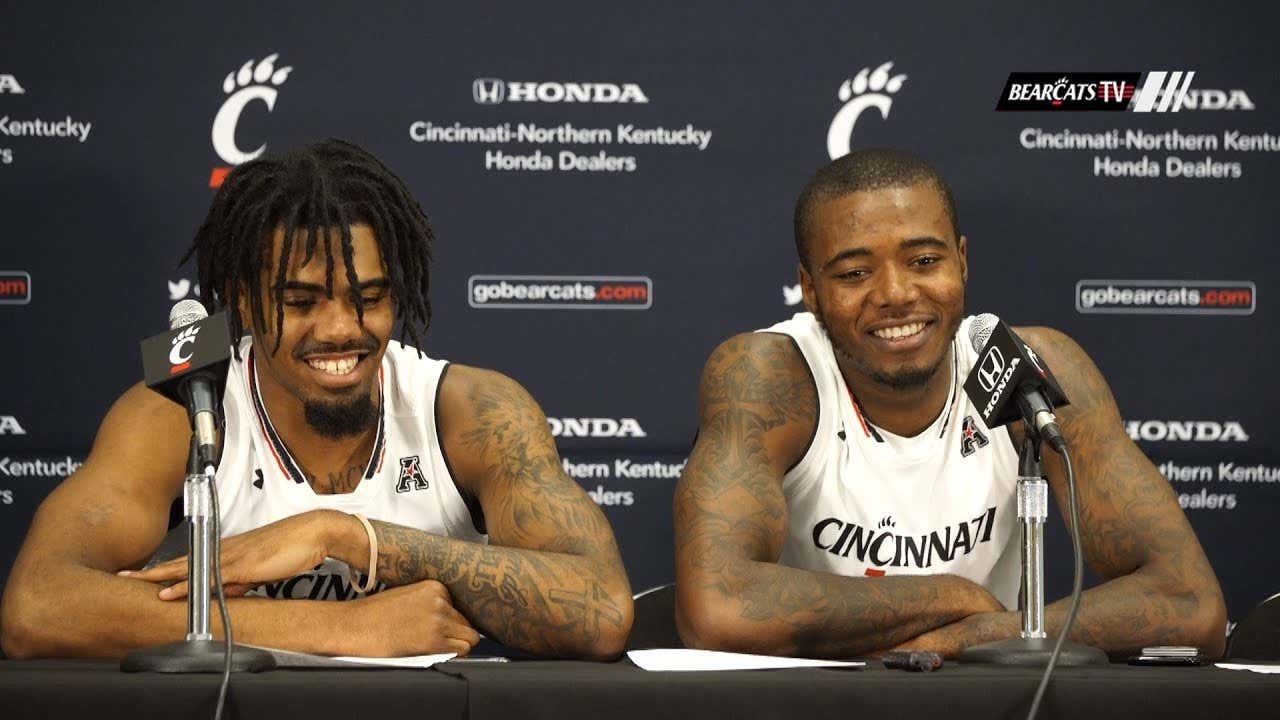 This was a series I started last season and something I want to continue this year. The goal of this is to highlight and discuss teams that are flying a little bit under the radar or just needs to be talked about that can contend on a national stage. Last year we covered the likes of Cincinnati, South Carolina, Dayton, Maryland and Notre Dame. We’ll take a look at different teams across the country as the season goes on, typically before or right after a marquee game and breakdown their strengths, weaknesses and what to expect moving forward. I plan on doing these every Monday as we head into March. We move on this year with Xavier. You can read the rest of the Contender Series as it goes on here:

Cincinnati has been in a weird spot in recent years. The Bearcats have been a consistent NCAA Tournament team yet never really looked at as a true contender. Part of that is due to being in the AAC recently and when Cincinnati was in the Big East, they were never really the big name as you obviously had UConn, Louisville, Syracuse, Villanova Pitt and others back then. So now here we are again. Cincinnati has been a top-10 team in the country for the last monthish. Cincinnati is on a 14-game winning streak while sitting on a 21-2 record this season yet it really isn’t being mentioned as a true title contender. So the question has to be asked – is Cincinnati a true title contender? What do they do well enough to be viewed as such? Where are the weaknesses that could make them less of a title contender but more of a Final Four ceiling? Part of the reason as to why Cincinnati might be still flying under the radar is the schedule. The Bearcats lost the two premier games they have played in this year – at Xavier and neutral vs Florida, both happened back-to-back and in December when we had football still on our minds. Since then, Cincinnati has had only a couple of notable games. The Bearcats won at UCLA, Temple and then home games with Temple, SMU and Houston. Even with that group only one, maybe two might be NCAA Tournament teams. The two games against Wichita State are on the horizon as well as a trip to Houston and SMU.

Let’s get into the strength of Cincinnati though. Despite all the talk in the preseason about how this was going to be Cronin’s best offensive team and a stylistic change of play and expectations, there has been one constant. Cincinnati is defending the hell out of the ball. The Bearcats rank 2nd in AdjD, 2nd in effective field goal percentage, 13th in turnover rate, 9th in block rate, 11th in steal rate and giving up just .724 points per possession. Cincinnati isn’t going to draw comparisons to West Virginia (besides Bob Huggins) or Virginia, but they are sort of a hybrid of both. Cincinnati will press about 30% of the time while then getting back to the halfcourt. They run mostly man-to-man, but what it makes them so strong defensively is how disciplined they are despite being aggressive. That’s where the Virginia comparison comes in – not that it’s pack line defense, but rather the fact they rotate really well and stay at home.

If you watched the most recent game against UConn, you saw how they will switch a bunch of screens, especially with Cane Broome. It wasn’t a zone, but Broome ran sort of a matchup set, something we used to see Louisville run under Pitino – a coach who Mick Cronin was an assistant under. Along with that, Cincinnati has the athletic wings that really let this defense attack. Watch here against Houston and how hard Evans doubles the post, causing the turnover. Along with that you can see the aggressiveness of the defense. Gary Clark – arguably the best rim protector on the team is in ball denial 25 feet from the hoop.

This sort of defense is vital for Cincinnati going forward. Yes, they are above average offensively, but can get stagnant in the halfcourt. The fact Cincinnati gets easy points in transition by forcing live ball turnovers and getting out and running is huge. Now, this is the best shooting team that Cronin has had at Cincinnati. As a team they rank 80th in the country shooting 37.1% from the 3-point line. The previous high for a Cronin-coached team was in 2015-16 when Cincinnati shot 34.8%. People will look at Jacob Evans being consistent or the addition of Cane Broome for this jump in shooting, but really what the difference is, is the fact Cincinnati has two bigs that can both step out and shoot the ball. Gary Clark and Kyle Washington aren’t going to kill you from deep, but they both have attempted at least 35 threes this year and are shooting 40.5 and 43.3% respectively. That’s a completely different wrinkle teams have to worry about when defending Cincinnati and also allows the Bearcats to run a hi-lo with the two if they want. Look at how open the floor is now with having two bigs that can step out: 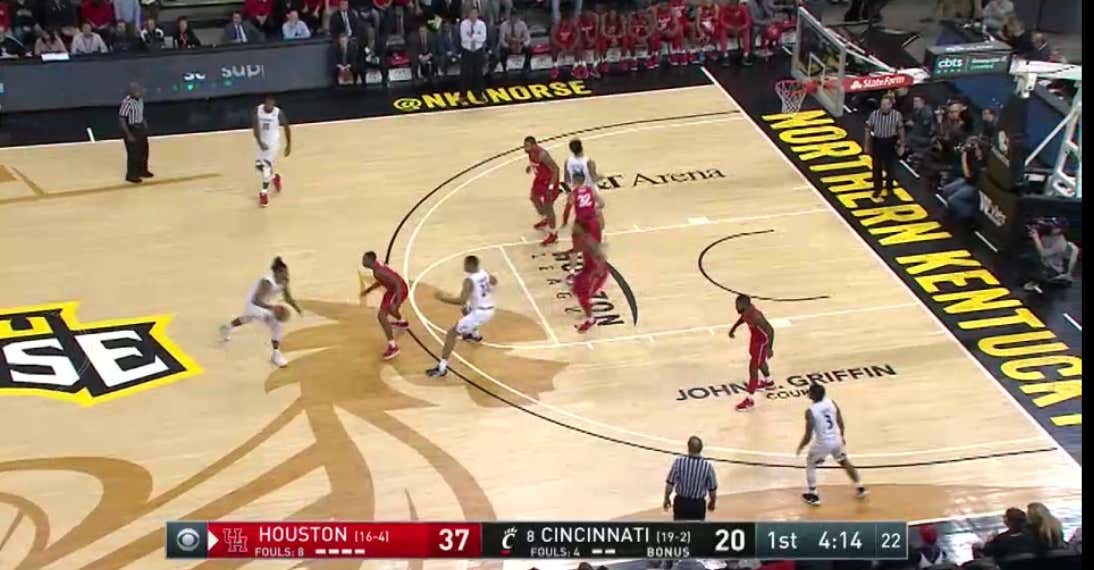 This play against Temple sort of shows the difference on offense this year for Cincinnati. They run the dribble handoff – which they’ve run for some time now – to get Broome in some open space. He catches the ball on the wing with just 1 defender and no one helpside baseline. He’s able to use his speed to get a half step on his defender causing everyone to react. In this case it’s Nsoseme that’s in the game and while he’s not a 3-point threat, he’s athletic enough to set a high ball screen and crash, which he is doing here. That leaves Clark open for three.

The other place that Cincinnati will just kill teams on offense is on the glass. The Bearcats are second in the country in offensive rebounding percentage and scoring 1.2 points per possession after grabbing those. It’s not necessarily a huge shock as Cincinnati has always been a good offensive rebounding team under Cronin, but again, this is the highest amount of offensive rebounds they are getting based on percentages. This is important because as I mentioned Cincinnati can get stagnant on offense in the halfcourt. This is a bailout that is vital for Cincinnati in March. They are adding essentially free points even if a possession stalls.

Now in terms of some issues that we could see come up for Cincinnati as a title contender? As I mentioned with Purdue, who is the lock NBA player? Jacob Evans has popped up on some NBA Draft boards and that’s really it. Remember, go look at all the title winners. They have that first round pick and typically have multiple NBA players. The one team everyone sort of pointed at as a team that didn’t do that was Villanova, but looking back on it you had Josh Hart (1st round pick), Mikal Bridges (likely top-12 pick), Jalen Brunson (likely NBA draft pick), Arch has played in the NBA and Ochefu is floating around. That’s not to say Evans won’t make his way to the first round, but there tends to be a ceiling on teams without multiple NBA guys.

While there is good balance here in terms of scoring, does Cincinnati have someone to take over the game if they are struggling offensively? You’d like that to be Jacob Evans or even Gary Clark, but it’s typically a little harder to do if you’re a post guy like Clark is. Cincinnati grades out as an above average offensive team, but a large part of that is due to excellent scoring on offensive rebounds and transition. They struggle against zone looks – something they will see in the NCAA Tournament.

That said, they can defend with just about everyone in the country and have enough depth to deal with any sort of foul trouble in a tournament setting. I do have reservations about them as a true title contender especially if you look at it the way Mark Titus told me he does. His theory was ‘if I said team x is your national champion are you surprised?’ Now, I do think Cincinnati is a legit threat to the Final Four and once you get there just about anything can happen. The end of this season could change the public perception of Cincinnati with the two games against Wichita State and road games at Houston and SMU.