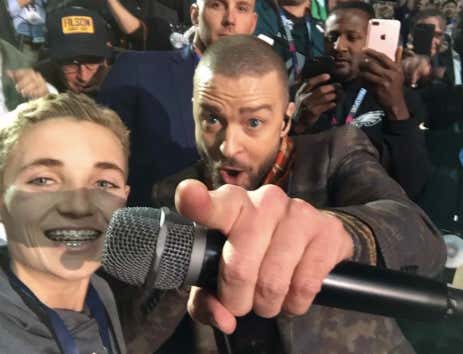 First of all, congratulations to the Eagles and to the entire city of Philadelphia on their well deserved Super Bowl win. Enjoy the victory now because it’ll probably be another one-hundred years until you get another. Now lets never talk about it again.

Despite the Kardashian’s best efforts to highjack the spotlight, the viral story of the night was #selfiekid. In case you missed it here’s the whole video.

As cool a moment as it was, it had to have been an absolute nightmare for a middle-schooler. My friends dragged me onto an empty dance floor over the weekend and it was hell. I kept going to the bathroom to try and get out of it. And that was in a dimly lit lower east side bar. This kid was dancing in front of a one-hundred-million person audience with Justin Timberlake. You could tell he was nervous because he kept checking his phone.

Naturally, the internet ripped him.

He went on GMA this morning to break the big moment down.

Kid had the time of his life: he got the selfie of the year, a 2:00 AM bed time, and most importantly eight-THOUSAND Snapchat followers. Most of which were probably drunk girls who thought he was cute. He’s going to have quite a bit of Googling to do when he starts to sift through those photos. In all seriousness, Ryan had about the best time you could have while watching your team lose a Super Bowl. So enjoy your fifteen minutes, Ryan. Hopefully we get a W next year.