In the near future, a group of international astronauts on a space station are working to solve a massive energy crisis on Earth. The experimental technology aboard the station has an unexpected result, leaving the team isolated and fighting for their survival. 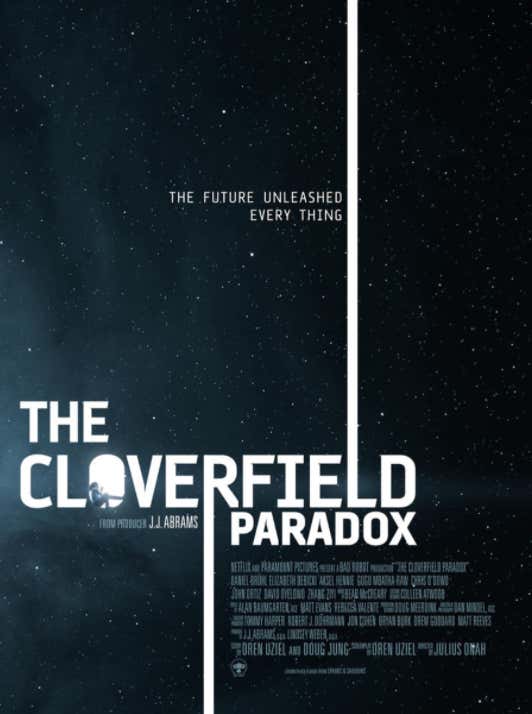 God dammit. I was so excited. I wanted to like it so much. I love JJ Abrams and everything he touches, and I loved everything about the Cloververse…until now. I got home from the Super Bowl party I was at, immediately grabbed all my favorite snacks, turned the lights off in my living room, and pressed play on what I thought would instantly become my favorite movie of 2018. Hell, I called this movie “my Super Bowl” last night. It was a heat of the moment thing, I basically said “I love you” in bed with a girl I barely knew, and the second I finished, I realized how much of a mistake that was.

Something felt off about ‘The Cloverfield Paradox’ instantly. I don’t know what it was, but the longer it went on, the more I started trying to convince myself that it was about to kick into high gear, and it just never did. I knew when I was halfway through that I hated it, to the point of wanting to turn it off and go to sleep, having no desire to see the outcome of what happens to any of the characters. The pacing was so poor I actually had to rewind the movie a few times because I got lost, the dialogue was so exposition-y it felt like a freshman trying to hit 1000 words on an essay, and the heart/emotion shown in this movie seemed like it was ripped straight out of the corniest low budget sci-fi television show ever. I guess you could say some of it seemed ‘Interstellar’ inspired, but you’d have to leave it at “inspired” because nothing about this flick deserves to be compared to anything about that one.

Somewhere in this messy script, there was a good movie. I truly believe that. Some of the concepts and themes presented were very intriguing. That good movie just wasn’t this one. I have no idea how Paramount ever thought they’d be able to release this in theaters and have it be anything other than a massive flop. Well, actually, I guess they didn’t and that’s why JJ picked it up, polished the turd a bit, slapped some Cloververse references into it, and threw it on Netflix. I dig the entire thought process behind that and hope they stick with it, even if it means every movie isn’t gonna be a John Goodman masterclass of acting or the most exciting modern monster film I’ve ever seen. I’ll put up with misfires here and there if they could continue using this universe of connected films as a supernatural Black Mirror/Twilight Zone type of thing for movies nobody else wanted, because they did this with ’10 Cloverfield Lane’ and I loved that, so there’s gotta be some more on the cutting room graveyard of Hollywood that are worth a Netflix release, right? Gotta be!

Oh, and I will say this about ‘The Cloverfield Paradox’ to close this thing out: the final ten or fifteen minutes are really well done (that’s when it FINALLY kicks into high gear), and the closing shot is so cool it almost makes watching the whole movie justified. Almost. It basically connects this to the original like ‘Rogue One’ connects to ‘A New Hope’, giving you that big “Ah-hah!” reaction. If you’re interested in seeing that, I’d pretty much read the Wikipedia plot summary up until the final scene and then scroll to the end of the movie on Netflix. It’s worth doing that at least.

I’m sorry if this blog was all jumbled up and full of nonsensical rambling (more than usual), I’m just upset and rattled over how much I didn’t enjoy this movie I was so insanely excited for. You shoulda seen me when “FROM PRODUCER JJ ABRAMS” hit the screen in Cloverfield font last night. I did like twelve backflips in a row. Guess this is kinda how Clem felt after seeing ‘The Last Jedi’ though. Heartbroken.