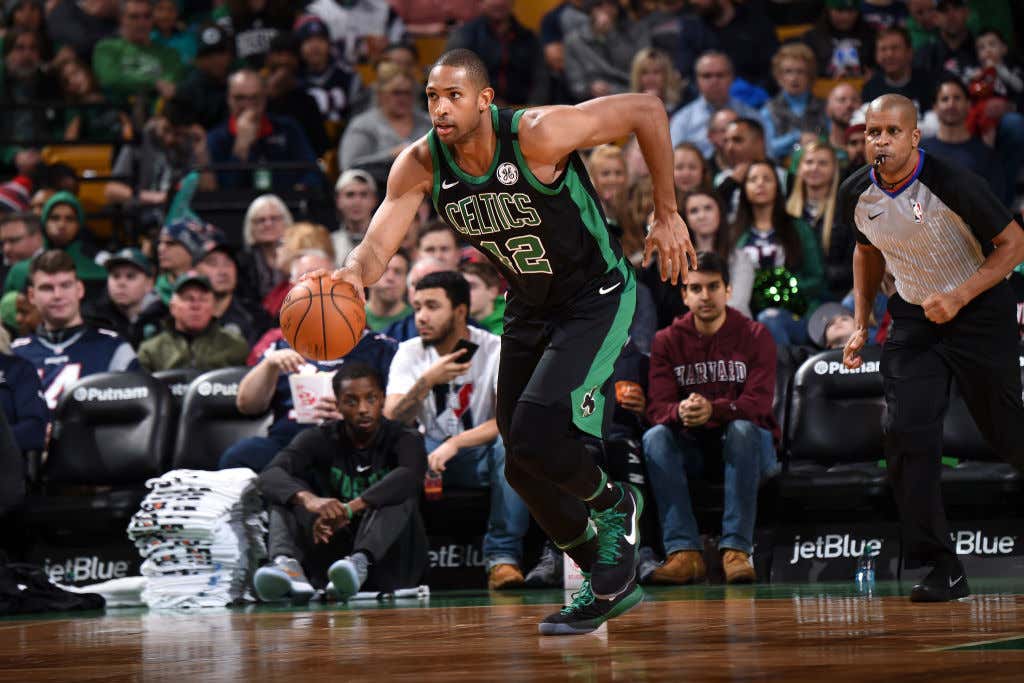 Well would you look at that. Al Horford, max player, All Star, game winning shot maker. If you’re looking for signs for how today could potentially go, it would appear as though luck is on our sides. With a few hours still to kill before kickoff I figure why not do a rapid reaction blog because I’m riding high and frankly could use the #pageviews. Normally these are more thought out with a little research, but fuck that for right now. We’re running on straight Kool Aid so let’s go

– How does it feel that your starting All Star PF is also a top 3 PG in the East? Feels prettaaaaayyyy preeettttaayyyy good. What a great day for those of us that understand basketball and see Horford’s value and importance and what a sad day for the haters and losers. Nothing like a much needed 20/10/5 on 8-12 shooting and ya know, the whole game winner thing

A turnaround contested fadeaway three. What a fucking shot. To be honest, Horford had been huge for the entire comeback, including this gigantic at the time three

He has been so solid during this time that Kyrie has been out, which is exactly what you demand from a player of his role and salary. I think it’s fair to expect that, but also important that we recognize when he lives up to it because it happens more often than some want to believe.

We saw today why he is worth every penny.

Oh and this was something that happened. It’s not fake I swear

– What else is there to say about Tatum that we aren’t already saying? Another huge fourth quarter filled with big time shots

He finished with 17/2/5 on 6-14 which was the 3rd most shots on the team. It is becoming scary how comfortable I am with Tatum at the end of games, and we aren’t even out of winter yet. Between his aggressiveness attacking the rim, the auto midrange, and the ability to make big time late fourth momentum threes, Tatum is checking off all the damn boxes of a potential star.

– Much like Tatum, Jaylen responded well from a poor shooting start to finish 16/6/4 6-15 shooting. What’s interesting was this was a reverse type of Jaylen performance. What I mean by that is that he only had 2 made FGs in and near the paint. The other 4 of his makes all came from behind the arc, including that huge corner three in CJ McCollums face.

Usually it’s the exact opposite, but I’ll take it.

– Come on, you knew this was coming

– Look by now there is not one of you who should be freaking out when the Celtics start like shit. We’ve seen it a billion times, and you just know as soon as it happens that they will come back in the third quarter. It’s clockwork. So was I at all surprised that the Celtics stormed back after being down 16 at half to make this a game entering the fourth quarter?

– The defense sure looked better in the second half holding POR to just 42 points. Dame had a rough 6-19 and CJ 9-22. As a team POR shot 39/41% and this was after a decent start. The Celts flipped the script after the first 24 minutes, and that’s their backbone. Defense and rebounding. No surprise they also won the rebounding battle 51-46.

– Crazy what balance can do for a team ya know? 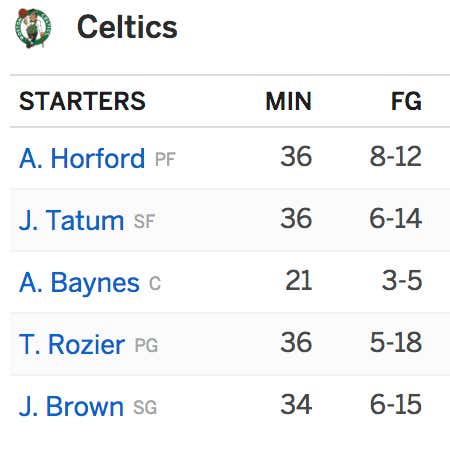 – Even though he had the worst foul of the entire day, I was still really impressed with the defense of Semi. His shot is another thing, but defensively he’s playing as advertised. Love how he basically is unshakeable. He can body positions 1-4 it seems and gets great leverage. We already know Brad doesn’t care about shooting as long as you can defend multiple guys, and that’s just what Semi can do.

– A little back down to earth for Terry, but big shots late and a final line of 11/6/5 is good enough for me.

– Well, everything we saw in the first 24 minutes qualifies. The Celts came out sleepy against a team from the West coast playing at noon. One would think it would be BOS who had more energy, but nope.

– Baynes had a tough time containing Nurkic early that’s for sure. As one of the better defensive bigs in the league I found this surprising. Celts were crushed in points in the paint 40-22, and he was a big reason why.

– I don’t know what to feel about Abdel Nader. He showed moments in this game, his three point shooting sort of kept them in it, but then he does things that also make you want to pull your hair out. Sort of like a AAAA basketball player. Too good for the G League but not good enough for the NBA. Again not too surprised that his 8 FGA led all bench players. He made just 2.

– Let’s just say I would be a lot more angry at the 5 missed FTs if the Celtics had lost this game by 1 point.

– Felt like a lot of moving screens on the Celtics no? Granted they were given a big time Nurkic foul late in this game to foul him out on a moving screen, but it seemed like the Celts weren’t getting away with this like they usually do. At home no less!

– I’m not sure what more they could have done to defend the CJ and Dame late threes, but man were those back breaking shots. After big momentum plays on the other end, you really would prefer stops there, but those two guys sure are something. It doesn’t matter what they’ve shot all game, you get into a late game situation you can just assume they are going to make you pay.

This is where the Celtics miss Marcus Smart incase you were wondering.

– So what the hell Mo Harkless. Average 5 points a game and come in and drop 19 and make all 5 of your 3PA? Boy did this feel similar to last year’s running contest of Which Shitty Player That Is Shitty But Plays The Celtics And Isn’t Shitty Performance which was the worst thing ever invented that nobody talked about.

He’s reached 19 or more points just twice prior all season, so of course this would happen.

– Honestly, that Semi foul may go down as the worst foul we see all season. First, maybe foul as you see Dame start to drive, but then once he gets to the FT line, just let him take the layup. You know any 50/50 call is going Dame’s way, and there’s just no need to contest. You can’t lose the game on a  play where you let him score, but you can lose a game when you make a mental mistake and contest.

Late game execution has been a problem for this team, because honestly they shouldn’t even be in these situations late. Up 5 with 2 minutes to go should be a cakewalk to a W. With the Celtics, of course it never is.

I hope this covered most if not all of it. Who knows. I don’t even remember typing this. Now let’s go win the fucking Super Bowl.