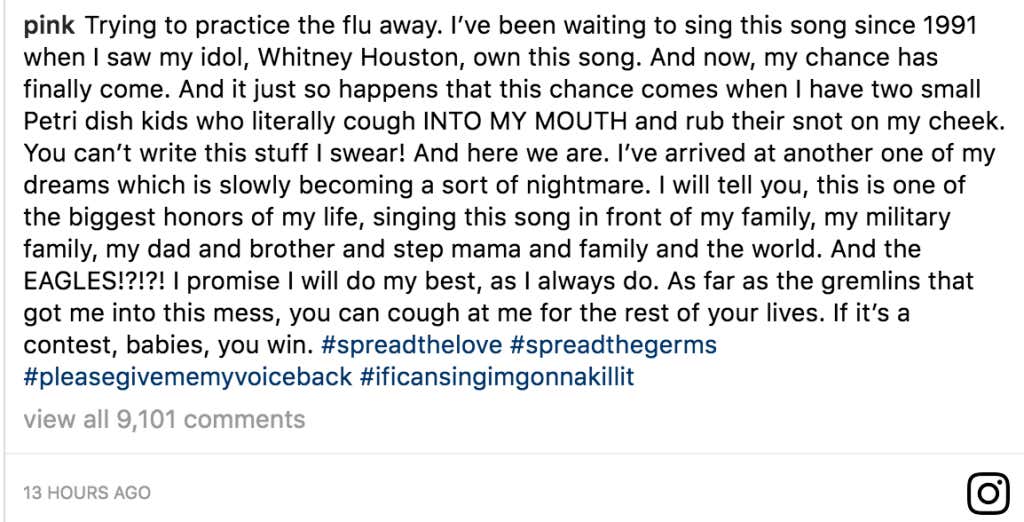 We’ve got an official Super Bowl Prop Bet emergency on our hands.

Everybody who read the blog knows that our National Anthem guru The Mad Maestro weighed in with some major in depth analysis for Pink, and his conclusion was a RESOUNDING “Over.”  The most confident I’ve ever seen him.  That was, of course, before this breaking news that Pink has the flu and can’t speak right now.  A major curveball.

My initial thought was, it’s okay.  If anything, it’s better.  Flu game – ever heard of it?  Brings out the best in every superstar.  She’ll really lean into it now, prove to everyone no virus can hold her down.  Probably go like 5 minutes.  Not to mention she’ll be struggling to breathe so just practically thinking that’s going to add extra time.

Nevertheless, I immediately picked up the Maestro Phone.

And his response has shaken me to the core.

Now I’m rattled.  Yes I wrote 7,500 on random ass props for fun but the National Anthem is THE most serious bet.  We don’t joke around with the National Anthem.  Maestro is always right, and seeing him unsure of this news is unsettling.

“Major cause for concern.”

More as the story develops once rehearsals are over.

Sorry for the delay. Tonight was the only time I could meet with my accompanist. I had to make some calls and catch up on all the news I missed before a full-on re-evaluation could occur.

Okay. This is a big deal. HUGE. I had the flu last week, and I’ll probably get it again next week. It sucks. The Flu can make your throat sore, feel short of breath and cause a cough. Bad news for singing. Fatigue is probably an even bigger issue. The longer you go, the more strain you suffer. This news is devastating. What are we to think now? How bad is it? Will Pink hold back because it? Is the virus waxing or waning? Wet cough or dry cough? This throws everything into question. No one is safe.

Well, in spite of this situation, I’ve found renewed inspiration. Pink did a pre-Superbowl concert on Friday. News confirms she was sick that night and had to take some verses off. She even backed out of a song because she just knew it would be too much for her. Good. Pink knows her limits. She was brawny enough to go forward with the show in spite of her condition, in full knowledge of her upcoming performance on Sunday. If she needed to, she could back out of the performance, Trump can order in the US Army Field Band to play the snot out of the anthem, and we’d all be okay with that. But no. Pink is a red-blooded American patriot. To quote Pink,

“I will tell you, this is one of the biggest honors of my life, singing this song in front of my family, my military family, my dad and brother and step mama and family and the world.”

That show on Friday isn’t “the biggest honor” of her life, the SB anthem is. Her words.

I see you posted Pink’s Instagram message. Pink specifically mentions idolizing Whitney Houston’s SB25 anthem back in ’91. More great news. It doesn’t get more epic than that. You don’t compete with Whitney by signing the anthem faster than she did. Pink has a game plan and I don’t think she plans on deviating. And perhaps the most important sentence from her Insta post,

That seals it for me. We know Brady has played games with the Flu. That’s sixty minutes of Football. Does Pink have it in her to take the mic for 2 plus minutes? I dare say she does. She can sing in freezing temperatures while suspended from the air. Take a decongestant, have an Emergen-C and drink fluids. There’s no way this is her first time performing while ill. The same goes for every musician I know. Even if she isn’t at 100%, she has the potential to rock the house. And to be frank, in my opinion, her singing style sounds like maybe she’s had the flu her whole life. I mean that as a compliment. There’s a lot of roughness in her voice that I think might harmonize with the flu. Pink is singing The Star Spangled Banner, not the State Anthem of the Russian Federation. That anthem (awesome btw) is non-stop glorious yelling. Our anthem has tenderness and vulnerability in its character. Notice in her Instagram rehearsal photo, she is softly embracing the mic stand, rather than a hard rock hands on the mic power grip. Pink can still deliver that sublime tender moment to the nation on it’s most sacred of holidays, Super Bowl Sunday. It’s going to be rough seas on Sunday when she steps up to the mic. But she is no dingy, she is a battleship. If Pink can manage her symptoms, hopefully this flu news might just simply be noise.

I’ll be honest, I don’t love a lot of the wording in this. Maestro is always 100% confident and deadset on his opinion, but this seems a little wishy washy.

However I don’t bite the hand that feeds me and I promised to always #IRideWithMaestro so….the over stays.