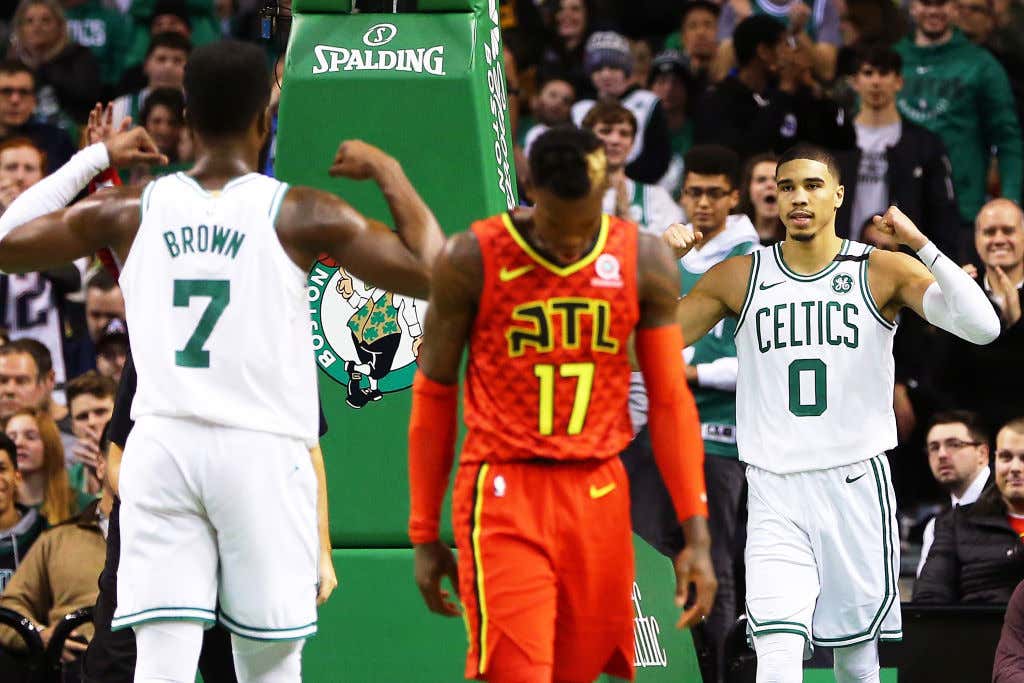 I want to start this blog off with something that became apparent to me after the final buzzer last. This team is 9-2 this year when their two best active players Al Horford and Kyrie Irving don’t play. What? How? How can a team play 6 rookies in a game, even if it’s against the Hawks and look this good? Well, partly because of Brad Da Gawd, but also because one one VERY important factor that people have wanted to refute for years.

Danny Ainge is one hell of  a drafter.

If you need evidence for that claim, look no further than the 119-110 win from last night. After a little skid where the Celts had lost 5 of 6, they’ve now won 4 of their last 5 and three in a row. You need to look no further than the play of Danny Ainge’s recent drafts to see why. I’m fucking excited, you’re fucking excited, so let’s get started.

– We’ve seen some Terry Rozier peaks over his 2.5 years as a Celtic, but we’ve never seen anything like THIS.

31/7/2 on 11-18 shooting and 6-8 from deep. He made his first five shots, and I’m laughing as I type this. Fucking Ainge knew this was here all along and that’s why he has always refused to trade him. You don’t have to look far on the internet to see how badly Ainge was crushed for taking Rozier 16th in the 2015 Draft. Well, I’ll ask you, which of these players would you rather have than Terry right now? 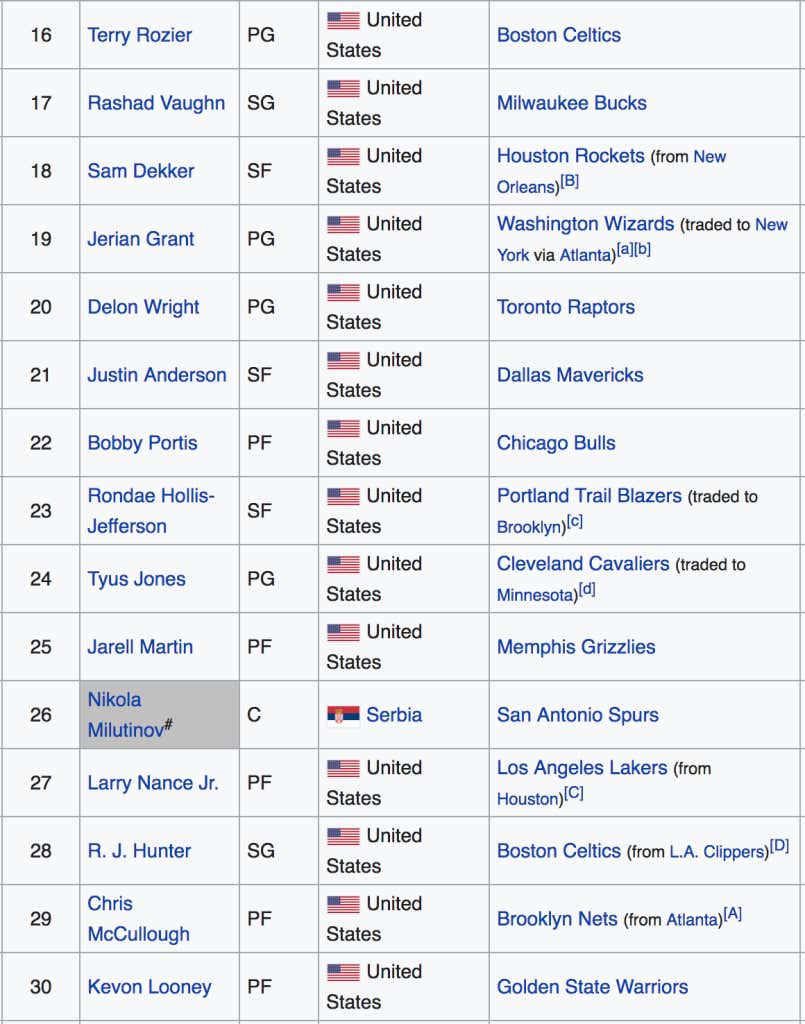 Exactly. Ainge knew what he was doing, he knew what type of player Rozier could develop into under Brad, and the best part is we’re just scratching the surface! Rozier is just 23, is under control for this year, next year, and then becomes a RFA. He is showing starter level talent as the third guard on this team! How many other NBA teams can say that?? Look at him knock down shots, attack the rim, oh and don’t forget about his defense either. Last night for example he was 3rd on the team with a 95.1 rating.

If we were to re-draft that ’15 Draft, there is no doubt that Rozier is a top 10 pick. Ainge nailed it.

– The next year Twitter experts were ranting and raving that Ainge reached taking Jaylen Brown at #3. Please join me in laughing at them too

Then factor in his improvement on the defense end (103 rtg vs 110 last year), this looks every big like a homerun for Ainge as well. Would you rather have Brown or Bender/Dunn/Hield? Exactly.

In this win, Jaylen finished with 19/3/4 on 7-14 shooting (3-5) from deep. Not a bad outing, and I wonder why. Oh right, because he keep using the right offensive approach. By the end of the night 8 of his 14 attempts came from the FT line or below. What that did was open up his confidence of his outside shot, so it’s no surprise that during that great 3rd quarter Jaylen made both of his 3PA.

I see so many Celts fans are for whatever reason willing to move Jaylen Brown. This confuses me because in today’s NBA the most valuable thing you can have is young athletic versatile wings. If that isn’t exactly what Jaylen Brown is then what is he? Again, only 21, things are going to get BETTER from here, and they’re already pretty damn good.

– Which brings us to this year, when Ainge made waves trading down from the #1 pick. I can admit, I was all in on Fultz like everyone else, but I also understood that if Ainge thought it was the right thing to do then I’m with him. Well, are we sure Tatum isn’t the best overall player drafted last year? Maybe him and Mitchell? Either way, everything came up Ainge last night in the best offensive performance of Tatum’s career, and he didn’t even take 20 FGA!!!

I know it’s becoming cliche to talk about how Jayson is just 19 years old, but this is pretty fucking awesome to see from a player who is 19 years old. I really really hope Brad & Co see what happens when you make Tatum a focal point of the offense. His 19 FGA led the team and he responded with a career best 27/4/3 on 11-19 shooting. I want to live in a world where we never have to live through a game where he gets 3 FGA in an entire half. Tatum may have arrived at a little bit of a rookie wall, but he has Kool Aid Man’d that shit and is back to playing great.

The experts pre draft said he wasn’t athletic enough, that his iso game wouldn’t really translate to the next level, that he wasn’t quick enough, that he couldn’t shoot threes. You know what Ainge said? Ainge said give me the next Kevin Durant (there I said it only 35% kidding).

– The haters, of which there are many, love to complain about Al Horford even to this day. This is one of my favorite Twitter traditions because it exposes people who clearly have no idea what the hell they are talking about.

“He never steps it up when it matters!”

is one of my favorites. Well, we saw him against the Knicks not only shut down Porzingis but also throw up 14/9/5 on 50% shooting, so how would it go last night against his old team, again without Kyrie? Would he be able to step up again? You tell me

But there’s more to Al’s recent run of strong play that has helped the Celts win 3 in a row, and that’s the fact that he’s taking care of the basketball, despite playing PG at times. He has just 3 TOs over his last 3 games and has really worked to cut down his TOs after the first few months of the season. He hasn’t averaged over 2 TOs a game in any month since November. That’s big for him and big for this offense.

– A lot of stoolies I talked to yesterday after the Monroe news really wanted him to take Baynes minutes. Because apparently if you aren’t known as an offensive player to some people, that means you don’t have any value. Well personally, I think this was valuable

11/8/5 for Baynes and that doesn’t even tell the whole story. Did you know Baynes had the highest Net Rating of any Celtics player last night at a +61.4? He was by far the best defender with an 85.9 rating and he dominated the glass with a 36.4% defensive rebounding rate.

Remember, his role is to be a big ass goon who defends at an extremely high level and to protect the defensive glass. Those responsibilities were the achilles heal of this team last year, and why we’re seeing the current starting unit have so much success. They let Baynes do the dirty work so nobody else has to, this makes Al’s life easier for sure, so spare me the Monroe should start routine. Aron Baynes is the exact center this team had been missing, and I don’t want him going anywhere.

– I get it, the Hawks are the worst team in the league so a lot of this is taken with a grain of salt, but I’ll never complain about winning the rebounding battle, the turnover battle, the points in the paint battle, and the fast break point battle. The Celts hit all the check marks that usually lead to wins, and for that I was happy.

– Also it can’t be ignored, after missing a million FTs against the Knicks, Celts went 18-20 from the line. Now it wasn’t quite the 31-34 performance from the Hawks, but at least the Celts are getting to the line which is impressive considering Kyrie didn’t play and he’s usually the only one who attacks the basket.

– Good to know the Theory is back on track. After a pretty shitty first quarter, boom there came the 41 point explosion in the third with 65/100% splits. That really was an incredible 12 minutes of basketball, and one I’ll probably be bookmarking for some alone time later tonight.

– I’m not going to do that whole thing we did last year where when our All Star PG misses a game and the team plays well we do the whole “ARE THE CELTICS BETTER W/O X” shit. Let’s just appreciate the offensive display, and also let’s not do the whole “MARCUS SMART IS NOW EXPENDABLE” bullshit either. People need to understand that this team is at their best when ALL of their guys are playing and contributing like this. A few game sample does not make it a rule.

– It was completely expected, and I’m not even really that mad at them, but the Celts bench gave them nothing. It seems that a lineup of all rookies is pretty brutal. They finished with just 14 points on 5-20 shooting with half the team’s TOs so that’s not great, but what do we expect?

You know what wasn’t surprising either? That Nader led them all with 8 FGA. After his 10 points against NYK you could have taken that to the bank.

– Dennis Schroder annoys the hell out of me, so I found it very annoying that the Celtics had no answer for him and his 25 points on 10-20 shooting. He was very much a problem to start this game, but the problem for him was Brad made an adjustment and took him out of the game in the second half. Either way, a little too much Schroder for my liking

– I also wasn’t thrilled with how the Celts were defending the three point line to start this game. ATL started 4-7 from deep in that first quarter and was 7-17 in the first half. I mean 7 of their 9 FGs in the opening 12 minutes came from behind the arc. Guarding the three point line is supposed to be a strength of this team, but it took a while for that to ultimately show up.

– You could call it nitpicking and I’d probably agree with you, but the Celtics 100000% took their foot off the glass in the fourth quarter. They shot 36/30% which wasn’t great, but on the defensive end they also had their worst quarter giving up 35 points and 58.8/50% splits. It didn’t come back to bite them but that’s not really the point. One day it might. That’s how bad habits start, and I’m sure Brad will be talking about it today.

– For crying out loud, it’s getting to the point where we need a #FreeYabu campaign. Just 2 minutes and 0 FGA, this is unacceptable. The game was in hand with about 20 minutes left in this game, playing at home, you have to give the people (me) what we want and just unleash Yabu. You could hav cut Jaylen’s 4th quarter minutes in half so he was in line with the rest of the starters and given those 4+ minutes to Yabu and watch the threes rain down. Saving it for the playoffs I guess.

So here we go, one last game tomorrow to close out the homestand against POR who just got dominated by TOR on Super Bowl Sunday. A great tradition and one where the Celts will have to maintain this level of play to pull out. Hopefully Kyrie is back, maybe we’ll see Monroe too, I haven’t really read too much about when he’s joining, but the key here is to keep building momentum heading into that Feb 6th date with TOR. That’s all that matters to me right now.