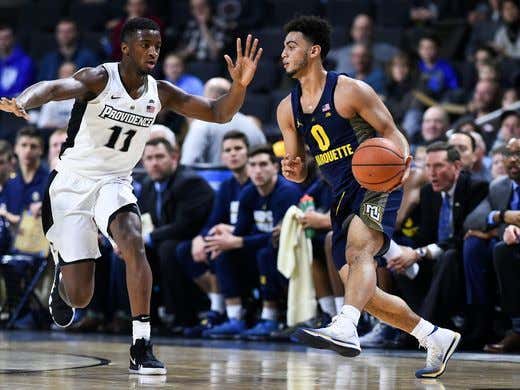 As always we’ll take a look across the country at some of the important games today. We’ll continue to break it up just to make the blog easier to read. I’ll admit, today’s slate is kind of weak, especially compared to the last couple of Saturday’s. In fact the best game of the weekend should take place tomorrow between Seton Hall and Villanova. But, we’ll talk about them tomorrow. Let’s get into the early slate today.

Decided to lump these two games together because we have two, maybe three bubble teams playing here. This is going to be a theme over the next month as games like this will continue to be highlighted. The two for sure bubble teams are Houston and NC State – I think both right now are likely the last four in but could use another decent win to keep them away from Dayton and on the right side of the bubble.

NC State is coming off that win at UNC and now gets to play a depleted Notre Dame team. The Irish have had some serious bad luck this year with both Colson and Farrell being injured. That said, they still have Mike Brey. I tweeted it out during the Duke game right before Duke went on a 36-14 run, but the fact these guys can still compete night in and night out shows just how damn good of a coach Mike Brey is. They’ll compete again today. What Notre Dame is doing is going back to how they played years ago. They are slowing it down, taking the air out of the ball, really defending and shortening the game. NC State wants to play uptempo. I expect Kevin Keatts to apply pressure defensively and force the Irish to play at a pace they don’t want to.

As for Houston, the Cougars let a game slip away that would have all but sealed an NCAA Tournament berth. On Wednesday they blew an 18-point lead at Cincinnati. Now they have to stay on the road and head to Florida to play UCF, a team like Notre Dame that has suffered a bunch of injuries. BJ Taylor missed the early part of the season, now Tacko Fall is hurt and Aubrey Dawkins has missed the entire season. That said, UCF continues to be a decent enough defensive team. However, Rob Gray struggled in the game against Cincinnati and ultimately was part of the reason as to why they blew that game. Gray won’t have back to back bad games. I’ll take both bubble teams getting quality wins today according to the quadrants on the team sheets.

Kentucky is coming off of two come from behind victories -at West Virginia and home to Missouri. The Tigers meanwhile got a very important win at Alabama to keep them on the bubble. But, they have lost four of their last six. They also are playing without Terrence Phillips, who is suspended as he’s under investigation by the Title IX office for complaints from four women. The two biggest questions I have for Kentucky is a) how do they handle success and b) how steps up to be the consistent player? I’ve talked about the first question before, but as for the second one they need someone like Gilgeous-Alexander or Knox to not have a night off the rest of the way. They are starting to turn the corner and we saw what Knox did at West ViMirginia and Gilgeous-Alexander had a 30-point game against Vandy. Missouri will try and get the ball to Jontay Porter in the post and then surround him with shooters. If Kentucky can continue to guard the 3-point line well – Missouri attempts the 37th most threes in the country – they should win this game. I’ll take the points.

Two ACC teams that are floating around the bubble. Miami has lost arguably its best player in Bruce Brown for six weeks. That means more will fall on Lonnie Walker and that’s not necessarily a bad thing. Walker struggled early in the year after missing all of training camp with a meniscus injury, but the freshman is probably the most talented player on Miami’s roster. He can defend multiple positions. If you saw the Louisville game you saw his athleticism with his crazy finish to go to overtime and his ability to take over a game on the offensive side of the ball. Virginia Tech is a different team at home though. They tend to shoot the ball better and sort of play into the environment. I think Virginia Tech wins this game and covers here at home.

TCU can’t seem to stop playing close games while Texas Tech has struggled on the road. The biggest matchup here is going to be Texas Tech’s defense vs TCU’s offense. This isn’t your typical TCU team. They struggle defensively and they want to get up and outscore you. Tech on the other hand will switch up its defenses and run a blitzing press or the pack line depending on situation and who they are playing. Get to know the name Keenan Evans though for Texas Tech. He’s an All-American right now and in my opinion the most underrated player in the country. If he has a big game, Tech will win this game. When he struggles, Texas Tech struggles – see the Iowa State game. I’ll be curious to see who Texas Tech puts on Kenrich Williams as he’s a bit of mismatch for them. That said, TCU seems to play close games all the time so I’ll take Texas Tech with the points.

The last time these two played it was an awesome game in which Markus Howard decided to drop a 50 burger at Providence in an overtime win. Both teams are desperate here as they are both on the bubble and in the middle of losing streaks. Both teams have combined to lose its last five games. Providence’s defense gives up a bunch of looks from the 3-point line, but tend to contest them pretty well. Marquette obviously wants to get up the court and shoot as many threes as possible. I talked a bit about their defensive struggles yesterday and whether or not they should split up Howard and Rowsey to start the game. Providence offensively will run the flex offense and try to take some time off the clock here. I’m going to take Marquette though at home. Rowsey and Howard are due for a big game at home.