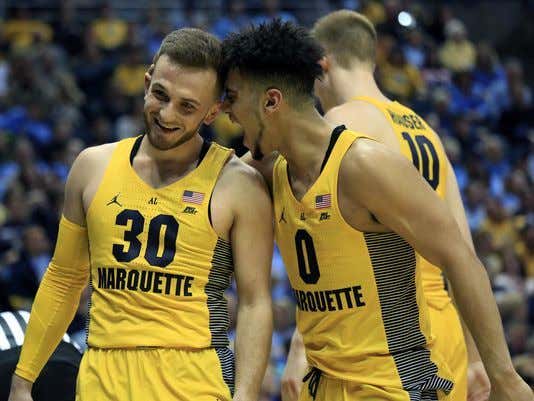 I think Duke vs Arizona would be a lot of fun just so we can see Marvin Bagley vs Deandre Ayton plus Arizona is one of the few teams that can run two bigs out there against Carter and Bagley. However, I think I’ll go Virginia vs Villanova. They are the two best teams in the country. They played an awesome game last year in Philly. Virginia’s pack line defense would see a different look as Nova will post up Brunson. Do they defend him the same way that they do regular post players? Nova has the shooters to shoot over the pack line as well. On the flip side Ty Jerome and Kyle Guy are having a dick measuring contest as to who can hit big shot after big shot and I’m quite here for that. It would also likely be a pretty clean game in terms of turnover and flow due without the whistle being blown due to fouls. Give me the two best teams.

Not at 8-10 in the SEC they won’t. There are two losses that will absolutely haunt Alabama come Selection Sunday. Losing to Minnesota in that 5v3 game, which yeah, it was crazy they made that run, but take out the 5v3 portion and that’s a game that Alabama should win. There’s also the game vs UCF. That’s one that’s going to look like a pretty bad home loss. Now, Alabama does have nice wins with the win over URI and Auburn, but both came at home. They end the regular season with games at Florida, Auburn, Kentucky and A&M while getting a home game against Tennessee. Go 3-2 in that stretch and you’re likely sitting on the right side of the bubble. You don’t do that you have to win a game or two in the SEC Tournament.

This is a bit of a double-edge sword because Marquette is at its best when its out running and getting open threes. That happens when you have two guys like Rowsey and Howard who can get the ball, push it, create for others or shoot off the bounce for themselves. To me the biggest problem is Marquette doesn’t really have wings to rotate in and out. It’s really just a three wing rotation with Hauser, Anim and Cain. When you have two guards under 6-foot you need to have bigger wings to help out. Well, out of that group Hauser is 6’8″, Anim is 6’5″ and Cain is 6’7″, which is fine, sure. But, Hauser is running the stretch four position. That means when Anim is in at the three you have three guys under 6’5″. I think it would make sense to split Howard and Rowsey up at times, depending on the opponent. Bring Rowsey off the bench the way Nova uses DiVincenzo when Booth is healthy. Run a starting five of Howard/Anim/Cain/Hauser/Froling. You still have plenty of shooting, you add a little bit of size and then you can bring Rowsey in for any of the first three and switch the way you look. Marquette’s a ton of fun to watch, but they’ll never win in the NCAA Tournament if they can’t guard a soul.

I’ll go with Kansas here. I think the Jayhawks are good. I think they are worthy of a No. 1 seed as of February 2, 2018. I think they are getting better and a large part of that is due to Malik Newman starting to look like he’s buying into the system and playing more consistent. However, they are the one team with the biggest weaknesses. What happens if Doke gets in foul trouble? Can they play a bunch of minutes with just Lightfoot or do they trust De Sousa enough to buy some minutes as well? What happens if they aren’t shooting the 3-point ball well? The other three teams can all defend. Nova can let Brunson attack and get into the paint. Purdue can throw the ball to Haas inside. So for that reason I’d go with Kansas.

It’s absolutely impossible to guess who will be the next head coach at Louisville. We need to know what sort of sanctions they will be dealing with and what sort of punishment the program will receive. Until we know that we don’t know who are real candidates and things along those lines. Does someone really want to leave a major 6 conference for a school that is going to have hypothetically 2 year postseason band and a 5 year loss of scholarships? If that’s the case is Louisville willing to essentially being held hostage for a guy to come in and demand a ridiculous 10 year contract with $10 million per year to clean up the mess and rebuild the program? Or will they just keep Padgett for less?

I think realistically they would be looking at a 3 or 4 seed. Cincinnati is rolling through the American, which unfortunately for them isn’t great yet again and with Wichita currently struggling it takes away what people would really look at as marquee wins. That said, the middle has improved enough to at least they are getting Quadrant 2 wins based on the new team sheets. However, if Cincinnati loses two more times like at Houston and neutral to Wichita or something like that I think you’d see a 3 or 4 seed at the worst. They are going to win the AAC regular season, which secures them that top-4 seed. If they beat either Xavier or Florida, I think they’d be in contention for a 2 seed but the nonconference is sort of underwhelming.

I wouldn’t say they are a 6 seed at best. They can still finish second in the SEC and win the SEC Tournament. They have wins at Kentucky, Missouri and Texas A&M. They have neutral court wins over Gonzaga, Stanford and Cincinnati. The resume isn’t bad at all, but the are inconsistent. I mean you could tell me they win out and win the SEC Tournament and I won’t bat an eye. But, they still have chances here with games against Tennessee, Auburn and Kentucky to close the season. Win those three and they are above a 6 seed. I think they’ll slide in as a 5 seed, but I don’t think that’s their ceiling at all.

There are a couple things here. First, the return of Esa Ahmad has made everyone sort of readjust their roles after playing half the season in a particular role. Daxter Miles is no longer the second option. James Bolden is losing shots to Ahmad. Guys are playing less minutes with Ahmad playing about 30 minutes per game. That’s not saying Ahmad is the problem or anything, but it’s a readjustment period. The other thing is West Virginia relies on the press to force turnovers so bad and when they aren’t getting them, they struggle in the halfcourt. When teams are able to break the press and more importantly attack off the press, they are in the trouble. Finally, it’s the Big 12. Look at the depth of that conference. Teams are going to go on losing streaks here and it’s not the end of the world. But, it’s worth noting that West Virginia could be in trouble due to the point guard talent in the Big 12. DeVonte Graham, Manu Lemcote, Nick Weiler-Babb, Matt Coleman, Trae Young, Keenan Evans, Alex Robinson and Barry Brown. Those are 8 of the point guards they’ll be facing. That’s a loaded task asking them to slow down them game in and game out. I still think West Virginia is a top-15ish talent team, but they need to figure out their new roles and really settle in.

Yes. Oklahoma did it with Sam Bradford and Blake Griffin. They’ll likely do it again this year with Baker Mayfield and Trae Young.