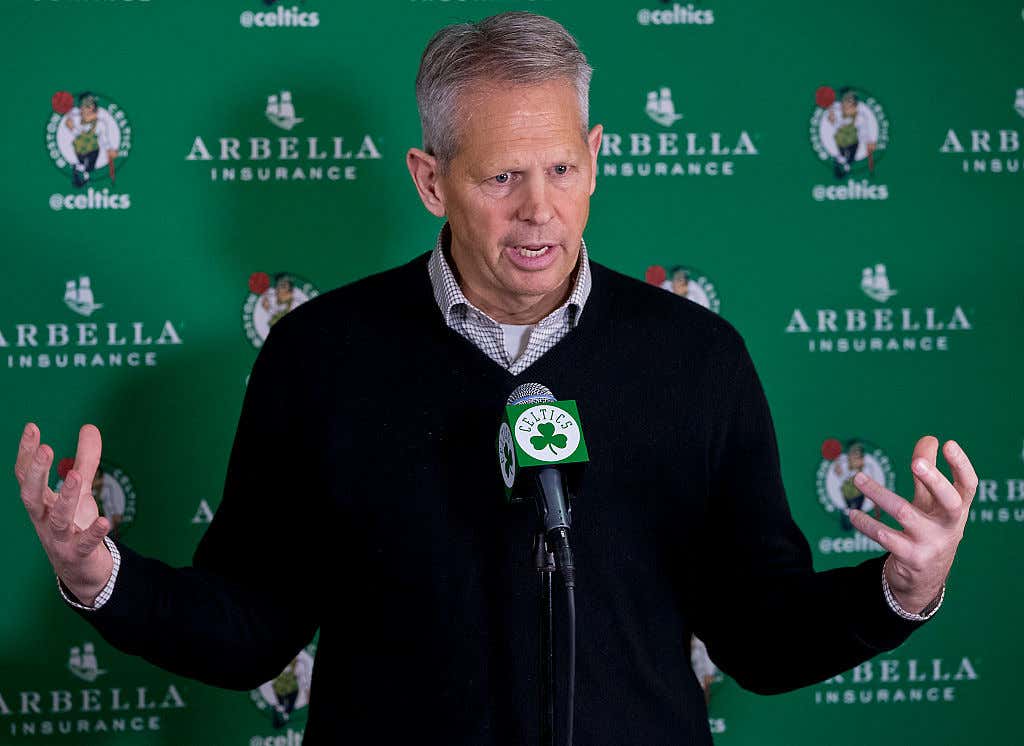 As the calendar has turned to February, it’s about that time where the internet is going to be littered with trade deadline rumors, buyout news, player emojis, and a whole lot of lost sleep refreshing Twitter looking for the next Shams/Woj Bomb. Exciting times for sure. Naturally, as they have been for the last 3 or 4 years, when the topic is the NBA trade deadline, there is one constant.

Once we get to this time of year, all eyes look to Ainge to see what he’s going to do. We all know he has assets, we all know his team has needs, and we all know he’s looking at the rest of the stupid GMs in the league like this

Here’s what we should expect. Whenever you see someone is being made available, or Player X is going to be bought out, the Celtics and Ainge are going to be tied to EVERYTHING. Maybe people put that for clicks, maybe it’s true. But I want to warn you, just because we see someone is available does not mean that they are the right fit/move for this team. Often times there is a name out there that people recognize and immediately want Ainge to make it happen. It’s not that simple from a wide variety of angles. There’s the front office side, in terms of salary and acquisition price and all that shit, but then there’s also a basketball side in terms of fit.

To this I say uhhhhhhhhhh ya think? Not really news here. Are there people out there that thought Ainge would do nothing with the DPE? I can understand him not making a trade, but to just let that $8.4M go to waste when this team has needs and there will be a buyout market? No chance. Now the hottest names on the market being tied to the Celtics are Greg Monroe and Tyreke Evans. Two very different situations that address two very different needs. Let’s start with Greg Monroe.

Here’s his deal, the Suns officially bought him out, so he is free to sign with whoever he wants. From what I can gather on Twitter it’s basically down to Boston or New Orleans. With Boogie going down and Monroe being from NO, I’m going to say they are probably the leader in the clubhouse. For a guy that will be looking for a new deal, the minutes the Pelicans can provide are probably really attractive. That is a known quantity. The Celtics pitch is more of a reserved roll and the chance to maybe win a title. Attractive, but certainly not a given.

It seems like a no brainer that the Celts should want him right? Well, let’s have a look. If Monroe is down to come off the bench, this could potentially solve a couple problems. First off, the Celtics rebounding has really taken a hit since around mid December, and you can tell by their win/loss record (13-9). During this timeframe the Celts are 25th in the NBA in rebounding%, and that is…..not great. I’ll go to the grave that rebounding might be one of the most important aspects of the Celtics success. So how does Monroe fix that? Currently this season Greg Monroe has the 20th best total rebounding rate at 18.6%, and 24th best defensive rebounding rate at 26.4%. For comparison of the rotation players currently getting minutes, Daniel Theis leads the Celts with a 16.7 total rebound rate and a 22.6% defensive rebound rate. Baynes (15.5/21.6) and Horford (13.1/20.9) aren’t too far behind. So knowing that, it’s clear that Monroe would come and immediately be this team’s best rebounder. There’s value in that.

On the offensive end, Monroe helps in one area where the Celtics desperately need it, and that’s scoring at the rim. I’ve blogged it before, but the Celtics are one of the worst teams in regards to finishing at the rim. Doesn’t matter if it’s a guard missing a layup, or a big missing a dunk, they flat out stink close to the basket. I’m talking shooting 57.9% less than 5 ft which is the 3rd worst percentage in the league. Depending on the starting lineup, when you look at some of the guys who could be the second unit bigs like Baynes (52%) and Theis (64.4%) you can see this isn’t great. Greg Monroe on the other hand shoots 71.2% within 5 feet. This would be the best mark on the entire roster.

I just want Celtics fans to be cautious here. Greg Monroe is not the same offensive player that he was in his early 20s when he was averaging 15 ppg. That doesn’t mean that he couldn’t help the offensively challenges second unit because he absolutely could.

This looks great right? Well I have a big time concern with this

He doesn’t stretch the floor, and if you look at that second unit or really any big on the roster, they all can step away from the paint. They can help create space for the slashers on this team to do their thing and get to the rim without having to deal with multiple defenders. This season Monroe has taken 188 shots. Just 15 of them have come from 10+ feet.

My other big concern with Monroe has nothing to do with his offense, but his defense. His production on that end has been taking a step back over the last few years, and you wonder if he is willing and able to buy into Brad’s defensive system. I have no evidence to suggest he won’t, but I also don’t have any evidence that suggests he will. But what I do know is his defensive rating has been trending in the wrong direction, and he’s never had the reputation as a plus defender. Do we really want him taking minutes from the defensive STUDS that are Baynes/Theis? How much you value offense probably matters.

Here’s where it also gets tricky. It looks like Monroe might be ready to make a decision before we even get to the trade deadline, which I’m sure Danny doesn’t love. He doesn’t like to make a decision until he absolutely has to and has ALL his options available. The risk is using the DPE on Monroe and then a different big gets bought out in a few weeks that they would have preferred. Maybe someone like Favors or something who knows. All in all Monroe can help, and if they know no other bigs are going to be available, I’m for it.

Now, Tyreke Evans. Everybody wants Evans and I can see why. He’s making just $3M and is having a SERIOUS breakout season. Hell, Bill Simmons is willing to trade Smart + 1st or Rozier + 1st just to get him. I shouldn’t have to explain why this is idiotic but I will anyway. You don’t give up valuable assets for a 4 month rental. That is not what smart GMs do. Adding Evans to this team but subtracting one of those players does not get you over the hump. Factor in that he’s unrestricted and I can’t image why someone would want to do this. Even if you hate Marcus Smart, the way his value may be dropping around the league, you don’t give up the chance to maybe match like a 10M offer. With Rozier, I talked about it in today’s blog, but he’s under control for 2 more years until RFA, and we learned last night that he may be a Top 5 Point Guard of all time.

We know Memphis wants a first round pick, and that’s all fine and good, but they also have zero leverage. They do not own his Bird Rights and cannot afford to keep him after this year, so I don’t really care what they want, they’ll take what Ainge gives them. Now the problem is there may be some team willing to give a 1st round pick, but let’s say Ainge is able to get him for like Larkin + Nader and a high 2nd. Hell, I’d even be willing to entertain the idea of Ainge pairing more players into a trade and including his first, but not using the DPE on Evans. This is a different situation than Monroe because we aren’t talking about just spending money, there are assets attached.

Can Evans help? I dunno, you tell me

The answer is yes. In an ideal situation, the Celtics second unit in my eyes would look like this: Smart/Rozier/Evans/Morris/Theis. The risk is putting Evans at SF instead of PG where he’s thrived, but at this point you have the flexibility to play Smart/Rozier off the ball if you absolutely have to. If the price is right, I think it’s worth getting the most out of his hot season and then you have a decision to make. Do you pay Smart or use that money to keep Evans? To me he’s priced himself out of the Celtics market, but here’s what I like for a potential playoff run. I love his size, I love his passing, I love his scoring and I love his ability to guard multiple positions. Again I’m not giving up Smart or Rozier for him, but he has a skill set that this second unit needs.

This is a move that I don’t think Ainge has to rush on. The rest of the league is going to wait MEM out until their price drops closer to the deadline I would imagine, and that’s exactly what I want Ainge to do. If you miss out on him then so be it, but you DO NOT overspend to get him. Could there be a little “wink wink” deal where they do a separate trade and then MEM buys Evans out allowing Ainge to scoop him with the DPE? Maybe.

While he would be an offensive plus, I’m not ready to consider him a good defender either, much like Monroe. I know defensive rating isn’t the end all be all, but his isn’t great, up to 110 this year. My counter to that is there are enough plus defenders on that second unit lineup that I can live with it based on the offense he provides.

There are some other names out there, like Lou Williams (who I would prefer over Evans) and who knows what his price might be, but there also may be other offensive shooters that are bought out at the deadline that we just don’t know about yet. The Celtics will have competition for all of these guys, and it’s no guarantee they land any of them, but we know something is coming. I think at this point Danny Ainge has earned the trust of us fans and we need to live with whatever he decides. If that’s stand pat on a trade and just pick someone up with the DPE? Fine. If that’s make a trade and use the DPE? Fine. He won’t mortgage the future that I know, so I’m ready to see him work his magic.

As always, In Danny We Trust.