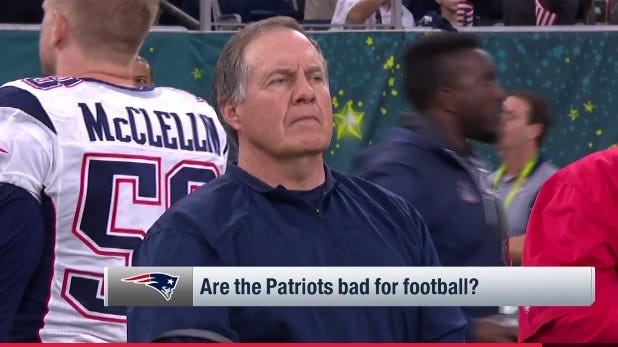 USA Today - They are the team that so often wins … and the team to hate.

Here we go again. The New England Patriots are back in the Super Bowl. … And much of America will be pulling for the Philadelphia Eagles to slay Goliath, if for no other reason than to see Belichick and Co. bite the bullet. This, too, is repeat stuff.

A dominant team is hardly bad for the NFL’s business. Sure, the NFL is built on parity, but having a king on the mountain also has a certain appeal.

The most-watched game of the NFL season, when TV ratings were down about 10% overall, came in the AFC title game when the Patriots rallied to beat the Jaguars. Nearly 48 million viewers tuned in. …

On Sunday, NBC is aiming to top the all-time record it set in 2015, when 114.4 million viewers watched the Patriots sting the Seattle Seahawks in Super Bowl XLIX. …

No, the NFL and the networks probably don’t mind the hate … as long as people are watching.

On behalf of the entire Patriots organization, the Kraft family, the coaches and players and Barstool, the go-to site for all Patriots-related content, I want to just say “You’re welcome, America.”

Think of what the Super Bowl would be without the Patriots in it and you were (all due respect, Chaps) being subject to a Sunday with Philadelphia facing Jacksonville. Of two weeks of talk about Blake Bortles, Doug Marrone and the storied history of the Jags. It would have all the anticipation of the Hall of Fame game.

Better yet, think about your world without the New England Patriots. Let’s say they got called up to another football league worthy of them on some higher dimensional plane. What would you have to care about without them to hate? What would you be passionate about? The Cowboys? The dynasty that never was in Seattle? The catch rule? Odell Beckham meltdowns? The National Anthem protests, God forbid?

The rest of the country should get down on their lousy, stinking knees and thank their deity that the Patriots exist and give them feelings to feel. This Sunday especially, but really all year long. Without them, your life would be a movie without an antagonist. Take Hans Gruber out of Die Hard and it’s just an office Christmas party. Did you ever tried to picture The Lion King without Scar? There’s only so much entertainment to be gleaned out of watching a pride eat a sick gazelle to perpetuate the circle of life. And the Pats are saving football the same way. By being the villain the NFL needs so desperately.

The article mentions the ratings of the AFC championship game and Super Bowl XLIX. What it didn’t mention is the highest rated TV program of any kind since the Super Bowl against the Falcons was Patriots-Steelers. The highest rated regular season game of 2014 was Patriots at Green Bay. I could go on and on, but I’ve made my point. You should be grateful. America needs them so they can point their finger and say “There’s the bad guy.” Say goodnight to the bad guy.