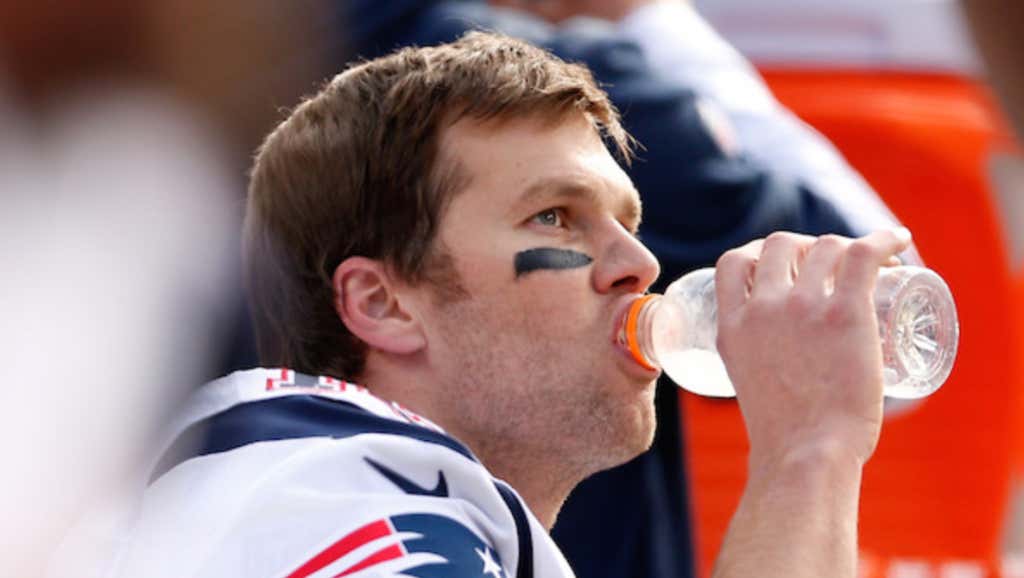 (NYDN) — Tom Brady is peer pressuring you to drink too much… water. In his new book, The TB12 Method, the quarterback recommends a hydration routine that’s more than a little unusual. Brady reportedly drinks over 37 glasses of water per day, enough water to hydrate a healthy person for five days. “Drink at least one-half of your body weight in ounces of water every day,” the book instructs. “That’s the minimum. Ideally, you’ll drink more than that, and with added electrolytes, too.” He believes this regimen to be crucial for living an optimally healthy life. The logic involves the idea that you can flush out toxins and increase your chances of what he calls “pliability,” his term for leaner, softer musculature. He even thinks his excessive hydration can prevent sunburns — an entirely anecdotal claim. “Sometimes I think I’m the most hydrated person in the world,” Brady triumphantly claims. Someone should get him a trophy. But the danger is very real. After drinking too much water, you could die. The condition is called hyponatremia; it occurs when you’ve flushed so much water through your system that there’s not enough sodium left. Your cells absorb too much fluid and swell, causing swelling of the brain and the potential of a stroke.

The Tom Brady water obsession isn’t new, but this tale is going viral again so I guess we have to mention how Aquaman is our quarterback. If there wasn’t already empirical evidence that Tom Brady is superhuman then here you go, doctors telling you that if you drank as many bottles of water as Tom Brady then you’d drown yourself. You’d be so bloated and overhydrated that you wouldn’t be able to function, let alone attack life with a vigor previously unseen on this planet. Your cells would absorb too much fluid and swell and your brain would swell and you’d have a stroke and die. Tom Brady? He just looks really handsome and has clear skin. He just has soggy muscles, or “pliable” muscles, I guess. Suntan lotion? No thanks, Tom doesn’t need it, just pass him a bottle of Voss. Things that would end your life only make Tom Brady stronger. If that isn’t proof positive that he’s the world’s greatest superhero/villain then I don’t know what is.