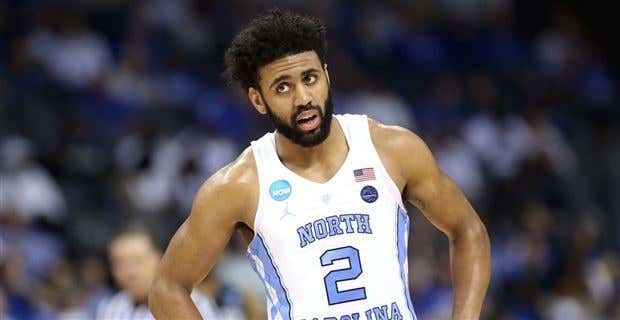 This is actually going to talk more about the season than just the three game losing streak, but the title works, so don’t be surprised when you read about earlier games. Now, that that’s out of the way, let’s get right into it. North Carolina was never a top-10 team as the AP poll indicated because well, the AP poll stinks. They’ve always been more of a top-20ish team than anything else and that’s still quite an accomplishment when you look at what they lost from the title team just a year ago.

That said, the one glaring weakness for this North Carolina team right now is its inability to defend the 3-point line. That is why the Tar Heels lost to Virginia Tech, NC State and Clemson. Time for some fun with numbers here. This is what UNC is giving up from beyond the 3-point line:

Now, there’s an argument out there that you can’t just look at 3-point percentages and determine if a team is good or not at defending the 3-point line. That’s incredibly accurate and there’s more to these numbers. For instance, UNC is giving up 3-point attempts on 43.1% of all field goal attempts. That ranks 319th in the country. They are letting teams score 42.8% of their points from behind the 3-point line, that’s the highest in the country. They rank in the 8th percentile on points per possession on shots from behind the arc. Giving up a bunch of looks from the 3-point line isn’t necessarily abnormal for UNC or a Roy Williams coached team. He stresses taking away the easy shot at the rim and gives up kicks. However, this is the most amount of 3-point attempts they’ve given up by about 4% and teams are shooting 2.3% better than the previous worst season. Those seem like small percentages, but when you’re talking an extra point for the shot it goes a long way.

All of this is quite bad. But, what makes it bad? Luckily for you (assuming you’re still reading at this point) that’s what I’m here to tell you about.

The first problem is they really have a great individual defender not named Theo Pinson. The guards get beat off the dribble rather easily. The bigs are young and still working on learning how to hedge on screens (more on that later). The breakdowns lead to easy penetration and then kicks. This where the second problem here, but arguably the biggest problem for me arises. UNC is absolutely terrible at rotations. They get lost, they are slow with the rotation and the extra pass leads to open threes.

For instance, watch the first made shot here for Clemson. Berry gets taken off the dribble quite easily – which is his biggest problem this year. He can’t stay in front of anyone. Roy Williams made the comment about Jalek Felton earlier in the season about how talented he is but he can’t play him if he can’t stay in front of anyone. That’s secretly been Joel Berry this year as well. Anyways, watch as he gets beat. Pinson rotates over to cut off baseline, which is fine. Except he rushes past and instead of trapping ends up a half step behind Shelton Mitchell. At the same time, Mitchell just pivots and takes a step back – where Berry should be. From there Cam Johnson dives down to take away the layup. Again, that’s standard and something Roy preaches. However, it’s Kenny Williams here who gets a little lost. He doesn’t see DeVoe on the wing and instead fights up to take away that pass, which ultimately doesn’t kill you. Instead it’s an open three.

This play, again from the most recent Clemson game shows the struggles of the bigs vs screens. Clemson isn’t running anything complex here. They are just replacing each other on the wings as the ball swings from side to side. After the complete swing to the opposite side it’s just a flare screen at the top of the key. This is a play that every high school and college team across the country has run for the last 20 years. Look at where Manley is on this during this still shot. 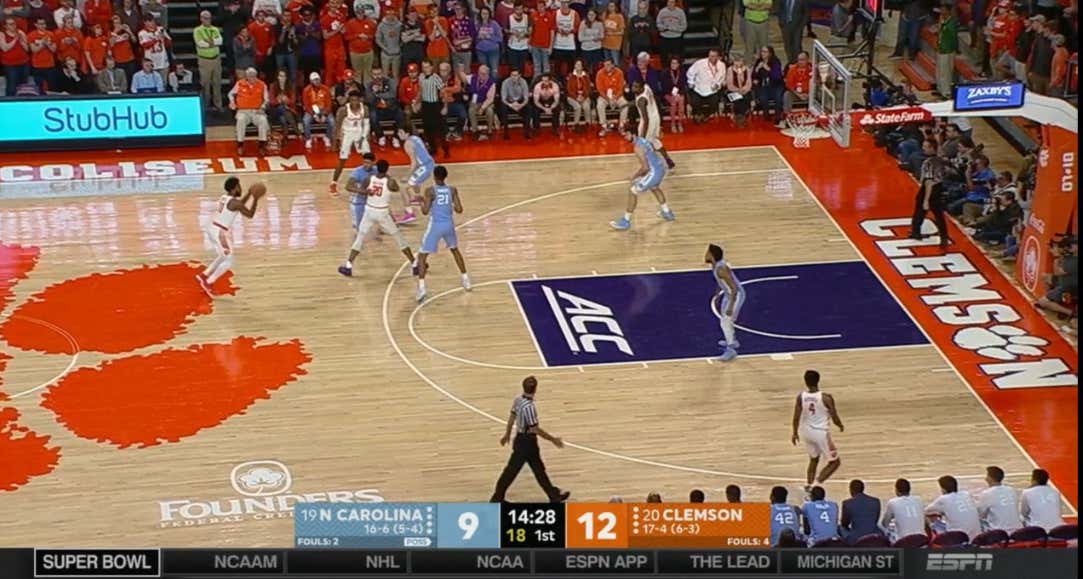 This is just incredibly poor defense. Manley never turns his head once on this. He can see Johnson getting screened and still doesn’t think to adjust. He’s hugging the screener instead of hedging and then rotating back. This is part of the problem of having young bigs that are getting put out in these sort of situations. Teams are starting to do this to UNC – put 5 out and let their big set screens and then crash the glass. Instead, Mitchell is able to take a dribble into the lane, Berry has to step up leaving Clemson’s best shooter in the corner.

Again, watch the rotation here on a screen the screener play against NC State. There’s the high ball screen for Dorin, which allows him to get a step ahead of Berry. At the same time, Beverly is setting the screen on Garrison Brooks which leads to a defensive breakdown. This time it’s on Andrew Platek who gets stuck too far into the post. This sort of overcompensation to take away the 2-pointer is setting up easy threes. Platek ends up so deep in the lane here, he ultimately gets screened by his own teammate.

Another major problem with this team is they aren’t forcing turnovers this season. They are currently forcing turnovers on just 16.5% of possessions, which is 298th in the country. It’s by far the lowest in the Roy Williams era for UNC, with the previous lowest being 17.7% in the 2014-15 season when they ended up as a 4 seed in the NCAA Tournament. There hasn’t been a switch in defensive scheme for this to happen either. They still run the man-to-man defense they always have. They still send a trap after timeouts and dead balls. With the shift to a smaller lineup, you’d think they’d be forcing more turnovers due to quickness and ability to jump passing lanes. However, it goes back to the lack of rotations. Instead of taking advantage of the doubles and cross-court passes, UNC is getting sucked in too far and out of position.

Another problem which has been brought up before is just how talented is this team? While Luke Maye is having a great year and is a great story, he shouldn’t be leading the team in scoring. He should really be about the fourth option on this team. Joel Berry has been fine, but hasn’t become that superstar point guard and All-American so many people thought he would now that it was ‘his’ team with the loss of Marcus Paige, Brice Johnson, Justin Jackson and Kennedy Meeks over the last two years. Cam Johnson was injured and has been working his way back.

After the game on Saturday against Pittsburgh, UNC really gets thrown into the fire. They end the season vs Duke, Notre Dame and Miami while having to go to Duke, NC State, Syracuse and Louisville. It’s completely reasonable to think they go 3-5 or 4-4 during this eight game stretch. Unless something changes defensively, this team is going to be who they have been the last month. They’ll look fine at times and get quality wins but they’ll also suffer losses to teams they shouldn’t.