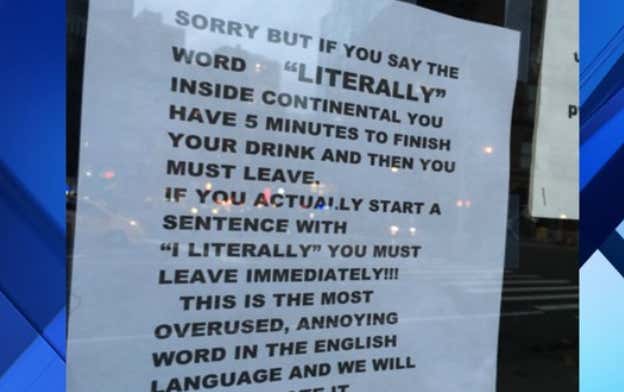 Source - Continental, a bar in the East Village that is famous for selling five shots for $10, has banned the word literally from its establishment.

The rules state that if someone uses the word “literally,” they are given five minutes to finish their drink and then will be forced to leave. If someone begins a sentence with “I literally,” that patron must leave immediately.

The bar says its reasoning for the ban is because the word “literally” is the most “overused, annoying word in the English language.” Their goal is to help “stop Kardashianism” by prohibiting use of the word.

The bar has filed for bankruptcy and is expected to close in June 2018, but until the bar closes its doors, the owner says, it will remain a literally-free zone.

For those of you who don’t know what Continental is, consider yourself lucky. It’s more of a rite of passage than an actual bar. Picture Coogans in Boston, but with cheaper drinks and an even worse business model. They offer “five shots of anything for five dollars.” Of course, by ‘anything’ they mean well liquor and specialty shots that I’m pretty sure are Kool-Aid. It’s a great place to go if you want to throw up on your own shoes. So, it came as no surprise when they filed for bankruptcy last summer after having not adjusted their prices or signage for thirty-three years. 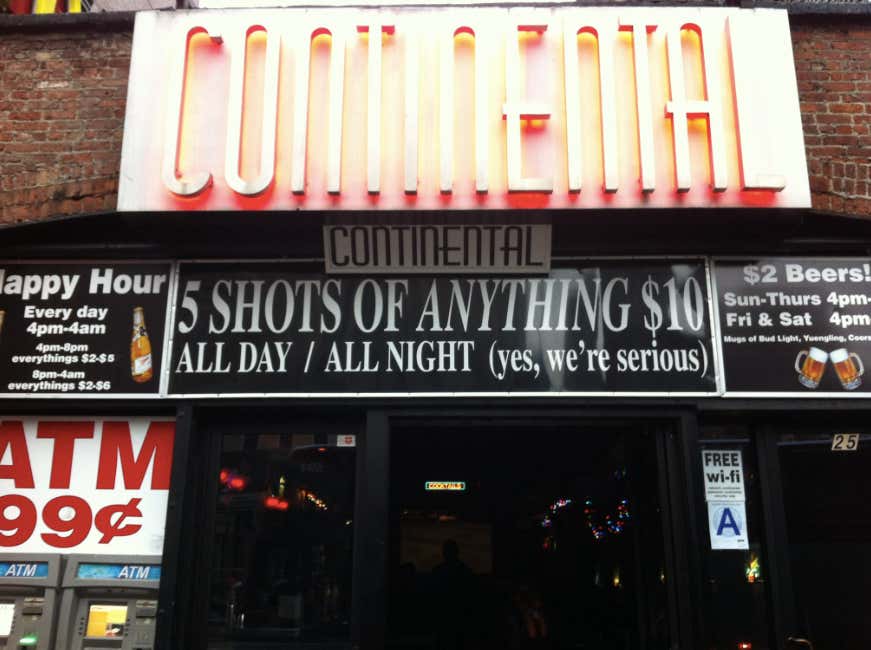 The fact that of everything they could’ve changed to help keep the doors open they chose to ban the word ‘literally’ is laugh out loud funny. Management actually sat down, tried to figure out where things went wrong, and landed on ‘Kardashianism.’ Never has a bar deserved to go out of business more than Continental. Don’t get me wrong, the word ‘literally’ is obnoxious. As is the way girls raise their voice at the end of every sentence like it’s a question, but come on. Raise your prices. Update the interior. DO ANYTHING. Don’t bitch about the people who are spending money at your bar. I’d send Taffer over there but it’s too late. They made their bed and now they have to lay in it. So long, Continental. It’s been real.

Editor’s Note:  Idk I’m kind of cool with this.