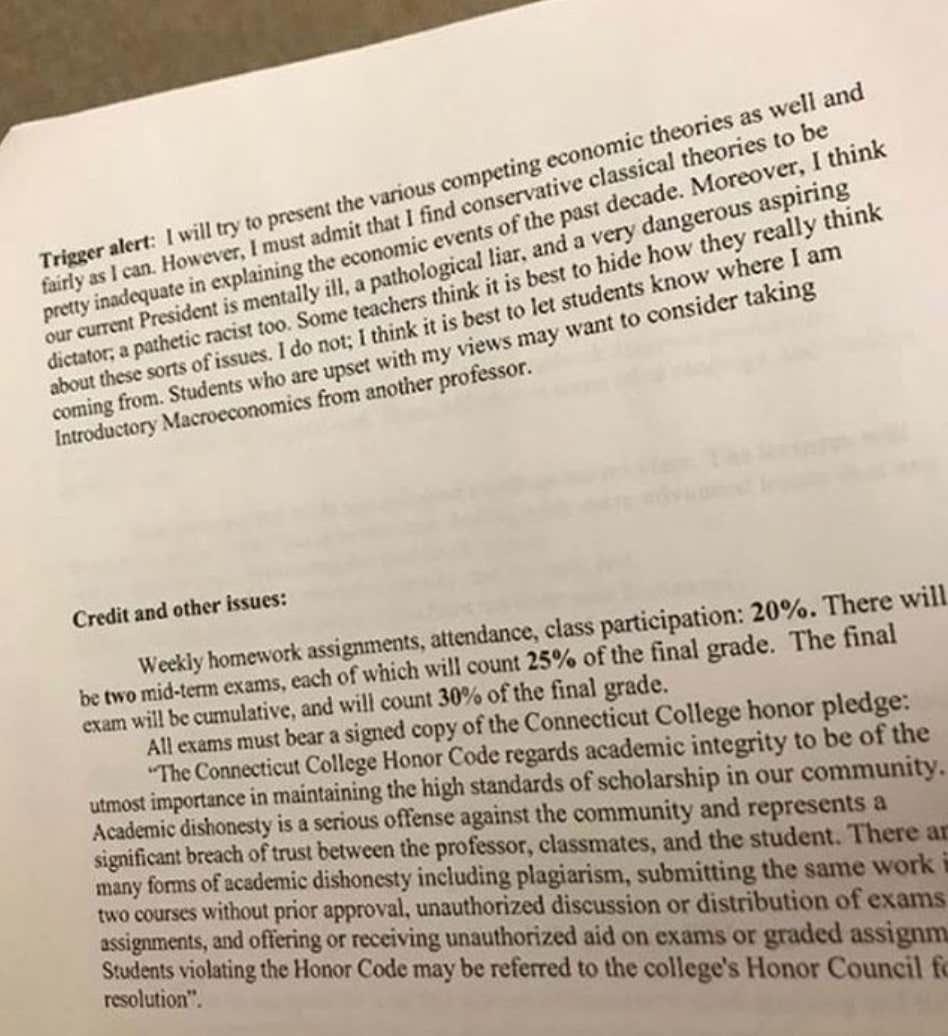 We got this in the Instagram DM’s yesterday (as did Old Row) from a student at Connecticut College in an Introductory Macroeconomics class during their upcoming spring semester. Almost all syllabus’ have been the same for the last century. Most contain significant dates for the class, grade distribution, class project prompts, etc. They really can’t get that complicated, but the syllabus for this Connecticut College Introductory Macroeconomics contained a bombshell. For those on mobile/don’t have great eyesight:

Trigger alert: I will try to present the various competing economic theories as well and fairly as I can. However, I must admit that I find conservative classical theories to be pretty inadequate in explaining the economic events of the past decade. Moreover, I think our current President is mentally ill, a pathological liar, and a very dangerous aspiring dictator; a pathetic racist too. Some teachers think it is best to hide how they really think about these sorts of issues. I do not; I think it is best to let students know where I am coming from. Students who are upset with my views may want to consider taking Introductory Macroeconomics from another professor.

The school I attend isn’t even a peak liberal arts college. There is a business school on the same campus and not located in a bubble in Massachusets with 1500 students, half of which couldn’t tell you 3 NBA players, that decry capitalism on their iPhones as they sip on a $4.25 coffee from Starbucks. But I have had the experiences I talked about above, as have other current liberal arts students who are fighting 12 rounds on a semester by semester basis.

Economics are obviously political, but going on a rant about Trump as a “mentally ill…aspiring dictator” in a syllabus is banana land. A move that I’ve never seen from a professor, but to see it came from Conn College, the NESCAC’s often forgotten ugly sister, makes it make a tiny bit more sense. What more can you expect from a school whose mascot is a damn camel: 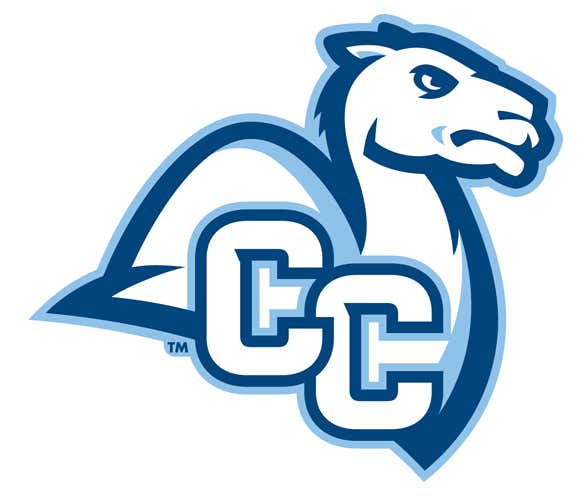 When listening to the advantages of attending a liberal arts college you will often be pitched a “well-rounded education that broadens the world of students to graduate as better informed global citizens.” Take, for example, Connecticut College’s pitch on their website for “academics that defy narrow boundaries:”

“Students learn to look beyond typical narratives and assumptions and build strong connections among the many aspects of their college experience: the languages they are learning; the disciplines they are studying; the communities they are inhabiting; their work in class and in the world; and ultimately, their lives after college. They learn how to make an impact—and how to inspire others to do so, too.”

Nothing “inspires others” quiet like cornering yourself off from hundreds of millions of American’s points of view, turning around and then forcing your personal political views upon your own students in an introductory macrofuckingeconomics class. I can’t get over the fact that this is Macro 101. This isn’t “The Economy In Trump’s America.” It’s the Macro 101 that every Econ major in schools across the country have to take.

While this teacher is inspiring, he will also teach these same kids “how to make an impact,” by not, you know, encouraging discussion and backing up your beliefs with strong facts and argument skills, but instead telling those that disagree with you to get lost! What an intellectual that “looks beyond typical narratives!” Go out their kids and “work in class and in the world!” But don’t go too far to places where your beliefs are challenged! You wouldn’t want that, no, never!

Look at the schools “Liberal Arts: a Smart Choice!” page: 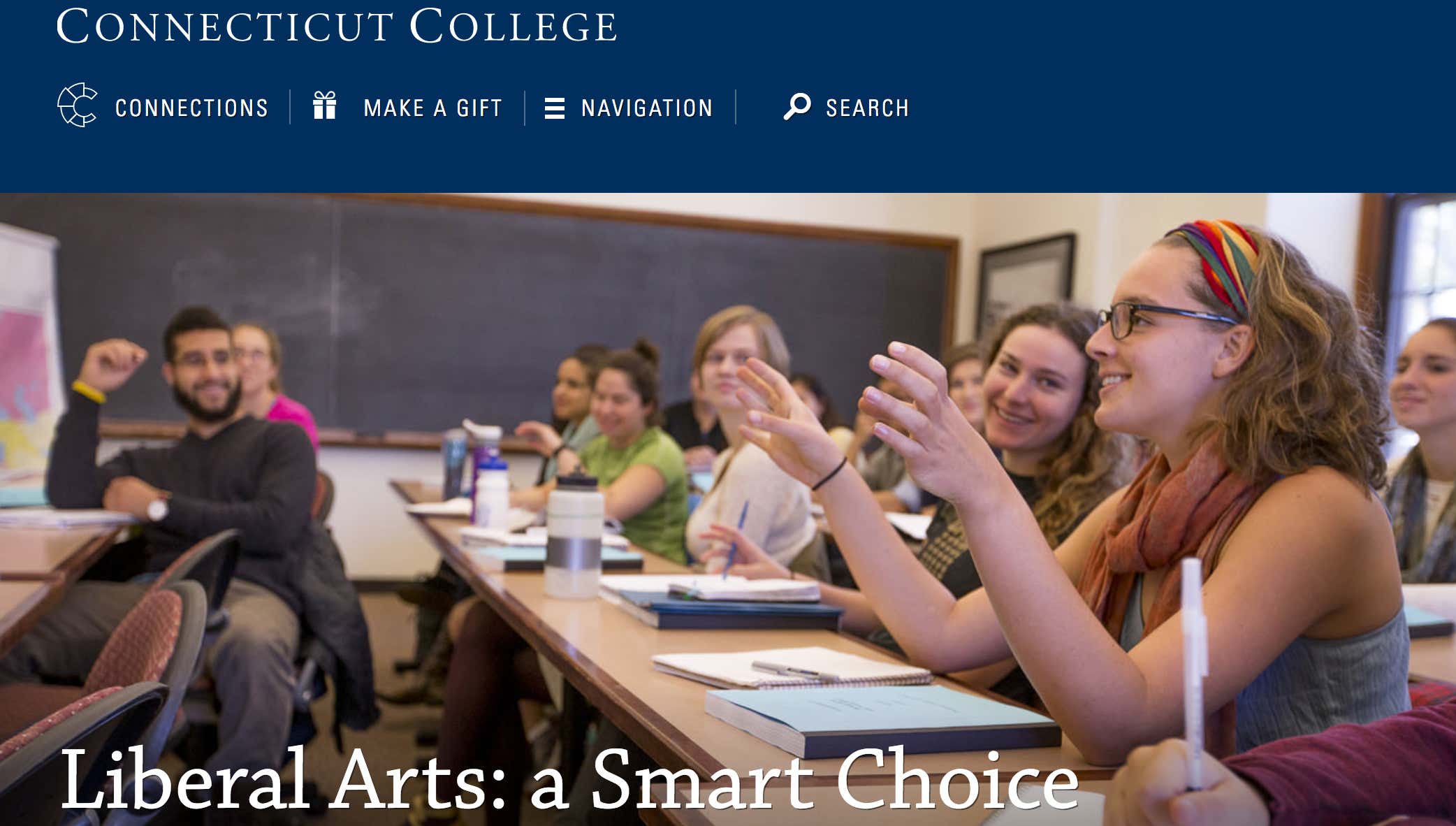 “Connecticut College graduates have the ability to think analytically and logically….” The hypocrisy to have this as a mission statement and then employ that professor is the state of a lot of liberal arts colleges in a nutshell. It’s not as if I’m deep on this colleges website either. These are main pages that are visited left and right.

Not a great time to be a Connecticut College Camel!