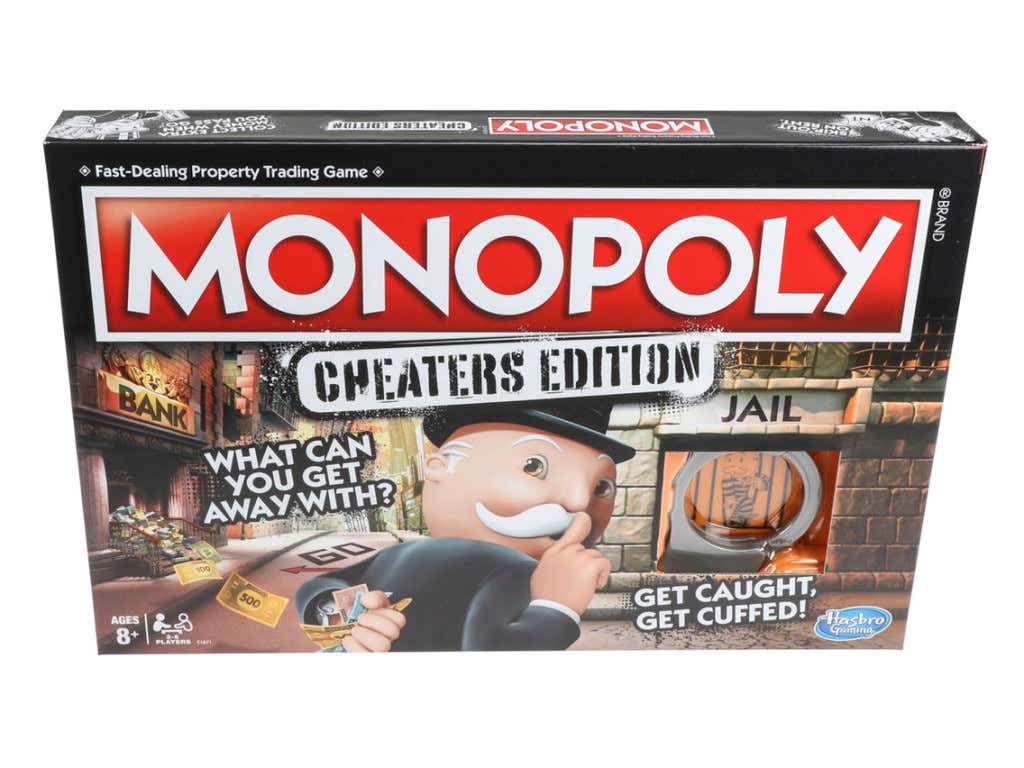 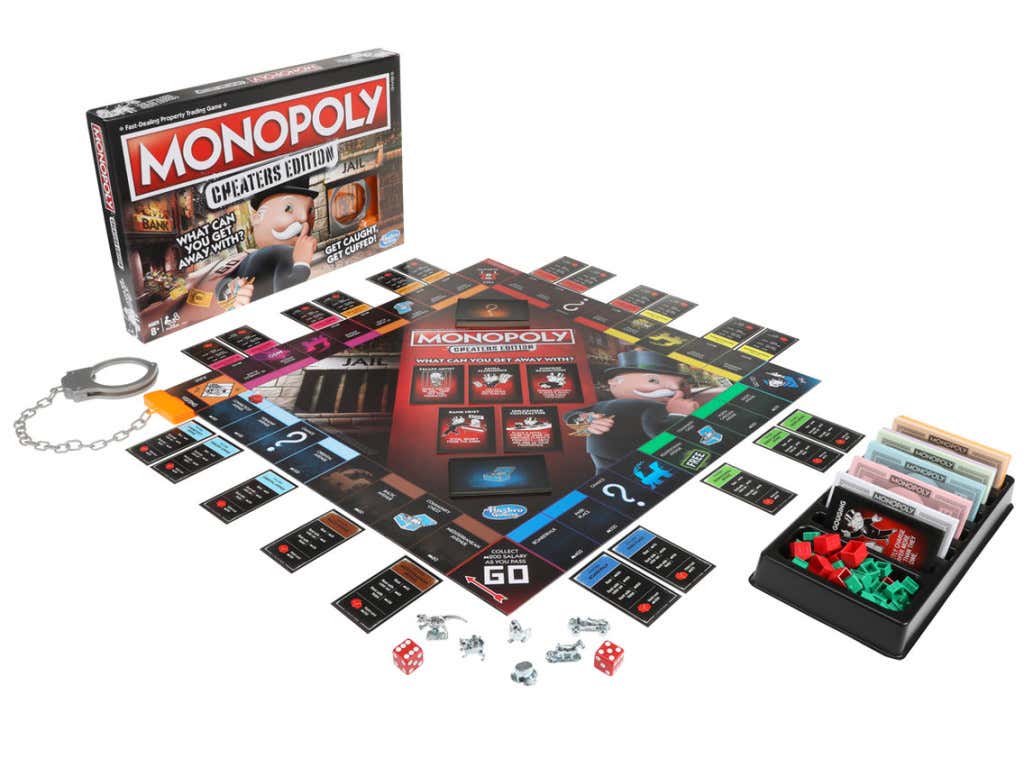 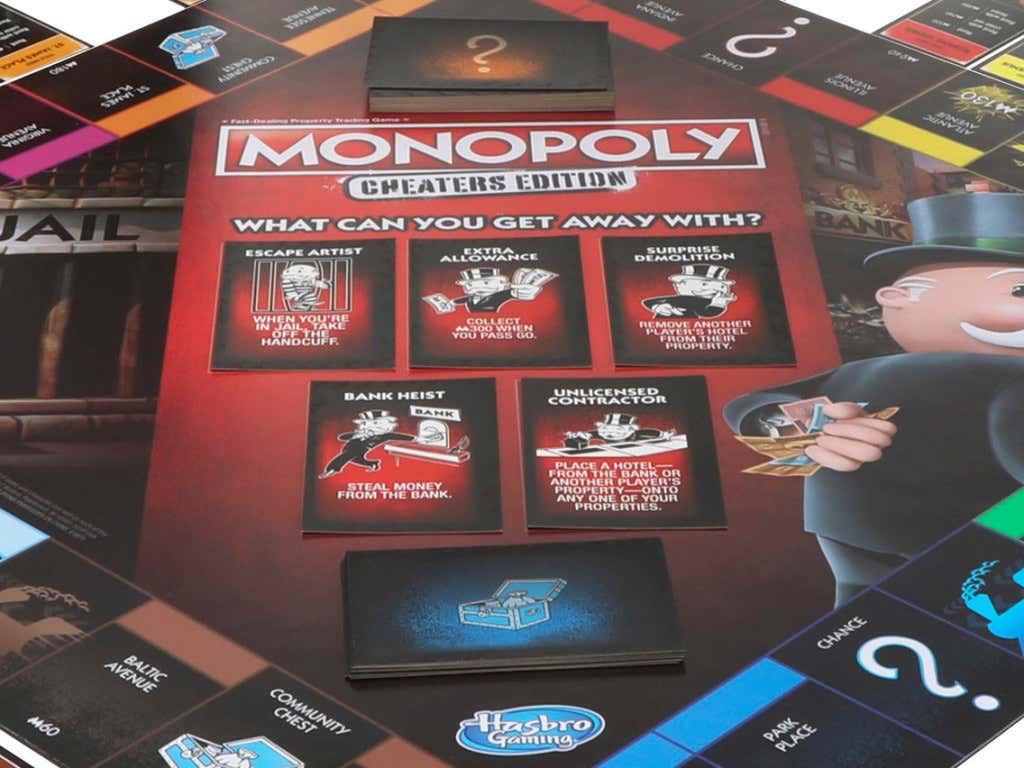 (Source)- If you’ve ever tried to sneak some extra cash from the bank at Monopoly or have tried to avoid paying rent when landing on Park Place, then we have good news. There’s a version of the game for you. This fall, Hasbro is releasing a special cheater’s edition of the game. “A recent study conducted by Hasbro revealed that nearly half of game players attempt to cheat during Monopoly games, so in 2018, we decided it was time to give fans what they’ve been craving all along – a Monopoly game that actually encourages cheating,” Jonathan Berkowitz, senior vice president of Hasbro gaming tells INSIDER. The object of the game is still to be the player with the most money at the game’s end, but it may be a little tougher to accomplish. The Cheater’s Edition will ask players to get away with cheating as many times as they can during game play. That means players can skip spaces, try to avoid paying rent, and slip a few extra bills from the bank when no one’s looking. 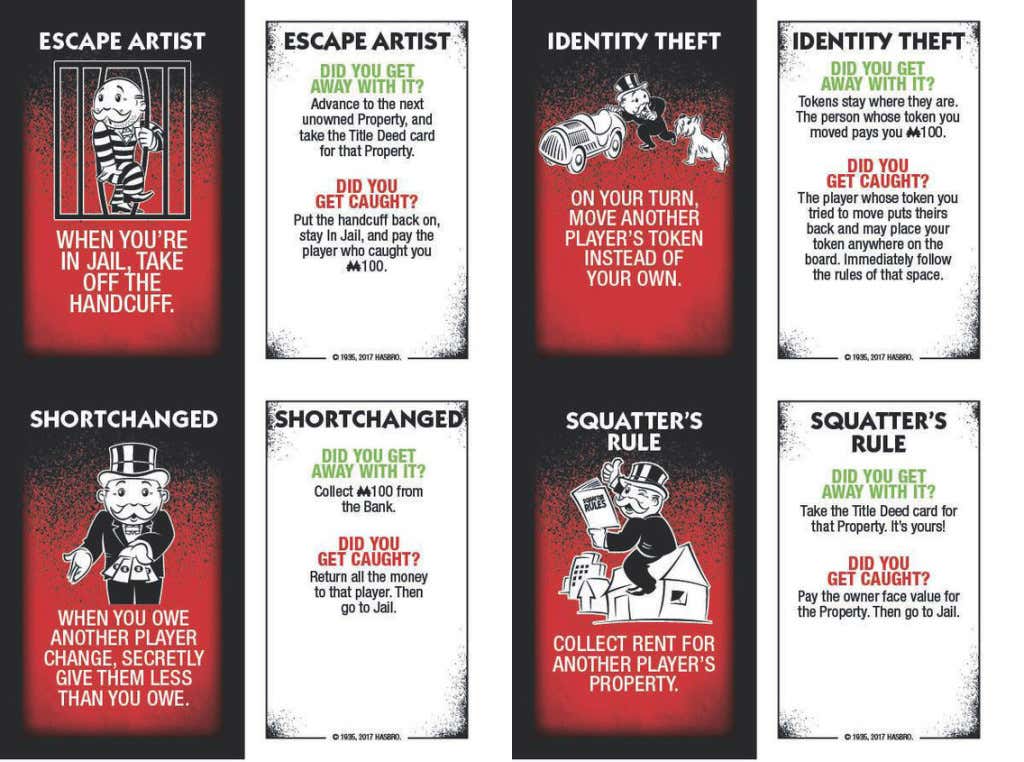 In addition to Community Chest and Chance cards, the Cheater’s Edition will also come with a stack of 15 cheat cards. During any point in the game, five cheat cards will be placed in the middle of the board which players can try to fulfill at any point of the game. The cards will ask players to complete a number of tasks during gameplay, if they wish to do so. If a player succeeds at any given task, they get rewarded. On the flip side, if they get caught, there are consequences. The back of the cheat cards list specific rewards and punishments for each cheat. “For the first time in Monopoly history, there is no designated Banker,” says Berkowitz. “Players are in control of the Bank on their turn, and pass it to the next player when their turn is over, making it easier to pull of “cheats” such as a the Bank Heist.”

I can’t imagine how hard it is to get people to buy board games in the year 2018. I’ve checked my phone 5 different times since I started putting this blog together. I love board games. I’m a huuuuuge board game guy. I’ll play and beat you in anything from Candy Land to Parcheesi to Guess Who. I would be down for some old school board game episodes of Gametime just to see who the true mental midgets in the office are. You put a bunch of bloggers on camera while playing games of strategy like Connect Four and classic Barstool embarrassment moments are sure to follow. The only game I refuse to play is Perfection. That board exploding was no good for my nerves when I was a kid and I can’t imagine the ol’ ticker would do too well with it today.

Anyway, back to Monopoly. I like that they embrace that basically everyone that plays their game is a cheating son of a bitch. We talked about cheating and the ramifications it can have on a family on The Podfathers a couple of weeks ago and that message remains the same. But I respect Monopoly trying something new. They are an American classic just trying to grind it out and do whatever works in order to move units in a crowded market. It’s not all that different than Oreo creating ridiculous flavors every few months. However, having people act as their own banker and encouraging cheating would lead to chaos. Bedlam. Disarray to the highest degree. And probably a shit load of fights. Pretty much the 1985 where Biff becomes rich as fuck (solid movie reference about as old as Monopoly right there, Clem).

In regular Monopoly, you have to be smart with your cheating and can’t do it all the time. $100 here, $20 there. You are wetting the beak, not drowning it. But having to worry about someone slipping a few thousand bucks, sneaking out of jail or if going the correct amount of spaces turns casual game night into an active activity. And who the fuck wants to be actively be thinking when they are playing a game in between looking at their phone? Nobody. Having a lawless game like this is like having no parents at your house as a kid. It’s fun in theory and may even be fun for a little while. But sooner or later, shit’s going to go off the rails. Life needs checks and balances, and apparently so does Monopoly. Don’t get me wrong, nobody is actually finishing a game of Monopoly whether cheating is allowed or not. But people should probably just stick with the old Monopoly set they haven’t opened since getting it for Christmas 5+ years ago.

P.S. No matter how good or bad this blog is, I know it will at least get a bunch of comments and every comment = 1 pageview. So that’s good for business, I guess.