A person’s looks affect their politics, with beautiful people leaning toward conservative beliefs, according to findings published by two Midwestern professors.

Good-looking Americans tend to get more credit and admiration than they probably deserve, thanks to their attractiveness, thus steering their political beliefs.

Uhhhhh yeah no shit. This is one of those things everybody’s known forever but nice to see science confirm it. Need more proof? Just turn on Fox News for 30 seconds then flip over to MSNBC and boom, you’ll have your answer. There’s just something about conservative women that makes them hot. Something in their attitude. Like they’d claw any liberal they see’s eyeballs out just to protect their right to put a rifle in your hands, hand you a 6 pack of Bud Light, and tell you not to come back until you kill something they can cook up for dinner. And you dig it. You know they’re batshit crazy but you dig it. Say what you will about Tomi Lahren — she’s BLAZING hot. She’s stunning. She’s a certified rocket.

Add in that she’s either batshit crazy or such a conniving, evil genius that she crafted a relentlessly effective caricature of the Fox News conservative barbie and either way that makes her even hotter. Tomi Lahren would rock your fucking world and if you look at her, listen to her, or watch her and think otherwise you’re a moron.

We call it how we see it round these parts and that picture’s so scorching hot I was forced to include it. Wouldn’t be doing my job if I didn’t. Even featured it.

I am not in the business of knowing if dudes are hot or not or whatever so I outsourced this important part to Pat. 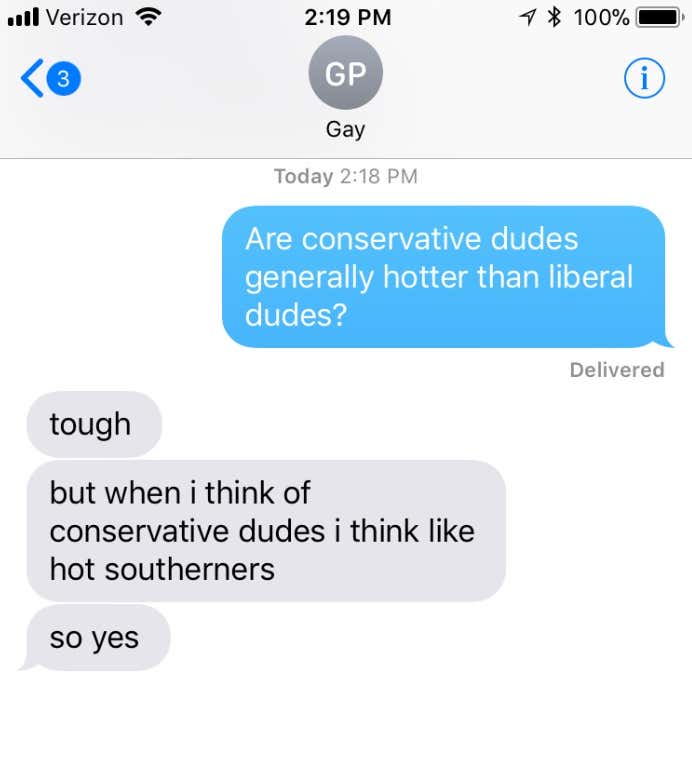 Tough to tell from that screenshot but he is not in my phone as “gay,” but rather as his full name, “Gay Pat.”