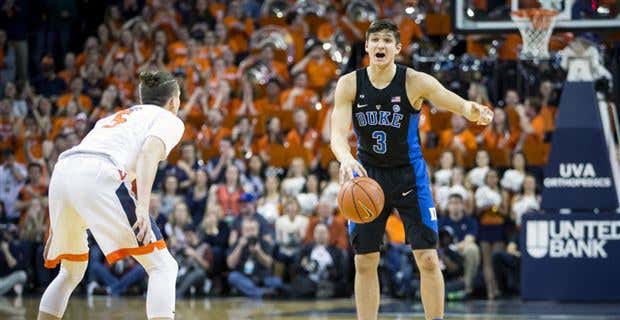 I wanted to put this in a separate blog due to this game being two of the five best teams in the country and the stylistic differences between the two teams. You have to start the conversation with Duke’s offense vs Virginia’s defense.

Virginia runs the pack line defense, which I went in depth about earlier in the year, but here’s what you really need to know. Conceptually the defense is set up to encourage dribble penetration, where there is help and typically a double in the corner. Virginia will often front the post with weakside help to take away post touches and then the ultimate goal is to force contested jumpers over the said line. Because you have your ‘line’ set up, defensive rebounds are easy to come by therefore you limit your opponent to one shot and more often than not it’s a long 2 – the worst shot in the game.

The point is pretty simple. You congest the paint, staying within a 16’ arc which forces long jumpers or if someone does happen to get into the paint, layups are contested. If you’re guarding the man with the ball, you apply pressure, well beyond the 3-point line, not letting the offense get comfortable.

Duke wants to run its offense through the post. That’s what happens when you have Marvin Bagley and Wendell Carter on your team, let alone in the same starting lineup. Duke gets 54% of its points from inside the 3-point line, which is the 64th most in the country. Some other numbers here for Duke is they are No. 1 in the country in offensive rebounding country, 10th in 2-point shooting percentage, 13th in shortest possession length and 12th in effective field goal percentage. A large part of that is due to the fact they can get the ball and run with guys like Bagley and Carter able to get up and down the court.

In order for Duke to be successful offensively today they need to get shooting from either Gary Trent or Grayson Allen – preferably both. You’ll notice I left off Trevon Duval, because at this point getting a couple threes from him is just an added bonus. We know what his game is. That said Trent and Allen both have the ability to hit 6-8 threes each. Duke will try to get the ball to Bagley and Carter in the post and look for rotation on the kickout when the double happens in the post.

On the flip side, Virginia will continue to use a bunch of clock on the offensive side of the ball. They are going to make Allen chase Kyle Guy around a bunch of screens while Duval has to stay in front of Ty Jerome. Virginia isn’t going to run any ISO sets or anything like that but look for Guy to run off of curl screens late in the shot clock. A guy I think that could have a big game though is De’Andre Hunter. At 6’7″ he’ll draw a little bit of a mismatch if Duke throws Bagley on him or Trent. Hunter is athletic enough to challenge Duke in the paint and can step out and hit a couple of jumpers. Don’t be surprised to see Duke run the 2-3 at times and dare Virginia to beat them shooting, as long as they shade on Hall/Guy/Jerome when they have the ball.

Duke seems to have figured it out because it hasn’t played anyone lately. The last currently-ranked team the Blue Devils have played was Florida in the PK80 title game. That said, this game is at home. I think Duke ends up winning this simply because of that factor.