*There will be some spoilers for ‘Three Billboards Outside Ebbing, Missouri’ when talking about the recent controversy around the character arc of Dixon towards the end of the blog*

Welcome back to Rob’s Monday Morning Movie Review! This weekend, the two movies to come out were solid “Fuck you, it’s January” movies, in that nobody cared about them whatsoever! They were ‘Den of Thieves’ and ’12 Strong’, neither of which had any buzz at all. So, I figured with Awards Szn being in full swing, I’d hit a movie constantly being nominated that I’d seen but not reviewed instead, and put it to a vote.

‘Three Billboards Outside Ebbing, Missouri’ was the victor, so let’s go! 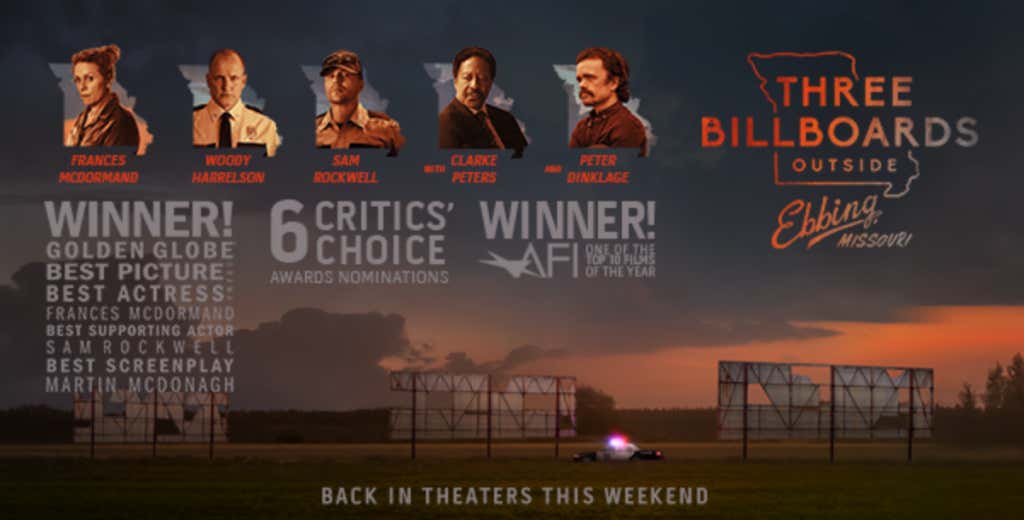 After months have passed without a culprit in her daughter’s murder case, Mildred Hayes makes a bold move, painting three signs leading into her town with a controversial message directed at William Willoughby, the town’s revered chief of police. When his second-in-command, Officer Dixon — an immature mother’s boy with a penchant for violence — gets involved, the battle is only exacerbated.

Every year, when Awards Szn rolls around, I make sure to see every movie nominated for Best Picture at the Academy Awards, and then as many as I could nominated for outside awards. I try my best to do so, at least. It’s something I’ve done since ‘Slumdog Millionaire’ won the award, a movie nine-year-old me probably would’ve never seen otherwise, and it blew me away with how phenomenal it was. Every year without fail, there’s always movies in the discussion that I put on, hoping to love, and wind up feeling majorly disappointed by. On the flip side, there’s movies I’m honestly just not that interested in that blow my expectations away. ‘Three Billboards’ undoubtably falls in the latter of those two categories.

I’ve watched ‘Three Billboards’ twice now, and I think you have to for a few reasons. The most important of which, and bear with me here because this’ll sound weird, is because it’s too good. The screenwriting, the production design, the cinematography, and literally everything else that makes this movie so great are all overshadowed by the performances of Frances McDormand, Woody Harrelson, Sam Rockwell, Peter Dinklage, and all others on screen. Seriously, there’s not a subpar actor/actress in the entire movie. Everyone is on this next level you’re never pulled down from. Frances McDormand is the best of everybody as I’m sure you’ve heard from reviews by now, and she deserves every award she gets. Personally I enjoyed Sally Hawkins’ performance more in ‘The Shape of Water’ but I understand how some view that as “gimmicky” – this is the best traditional acting done all year. She accurately portrays a mother mourning for her daughter who’s been raped, killed, and forgotten by the local police. I think that says all I need to say, because that’s something none of us could ever imagine, and she put herself in the mindset to make us believe she herself went through it.

On the second watch, try to pay attention to everything that ISN’T the actors. The production design which I mentioned earlier is so important to this movie because of it’s grounded script. You feel like you’re IN Ebbing, Missouri during this movie. You feel like you know the town, know the people of the town, how they talk, how they act, where they hang out, etc. There’s an interesting balance of the screenplay being so grounded in reality and at the same time taking liberties in scenarios that’d never happen in real life, but in this movie, you just believe them. Everything seems feasible. As for my favorite scene in the movie, and this is one of my favorite scenes in any movie all year, it’s the one that involves Woody Harrelson’s character writing/reading a note he wrote to a few people. You’ll know the one if you’ve seen it.

‘Three Billboards’ isn’t the perfect movie, however. You may be aware of the sorta recent controversy surrounding the flick, more specifically surrounding Dixon’s character arc. In short – Sam Rockwell’s character is known for hating – and going as far as torturing black people – and receives what’s very easily construed as a “redemption arc” by the end of the movie. It’s very causally glossed over, and the movie takes you in so many directions emotionally that it’s possible you forget how monstrous this guy who’s “good at heart” really is. It’s surprisingly ignorant writing for a movie that’s so brilliant, and I completely understand the outrage. He’s almost made out to be an anti-hero at the end with Mildred, in that they’re on their way to do something horrible, but it’s TO someone horrible so the viewer is, I thiiiink, supposed to feel good about that. Almost in the ‘Dexter’ way, but instead of Dexter just killing murderers, he also killed innocent minorities. It’d feel very strange to root for the character then.

While as more time goes on and the more I think about ‘Three Billboards’ I like it less and less, the bar I initially had it at was so high that I could still appreciate everything about it outside of Dixon’s character. I still think it’s worth a watch as one of the most fantastic movies of 2017, I still think Frances McDormand and Sam Rockwell deserve the accolades they’re obtaining, I just wish the movie were smarter in that one aspect. I’d say it lived up to the hype in a major way with enough GREAT to outweigh the bad. Hope that’s fair.

Return to the site next week, Monday at 10am, for my review of ‘Hostiles’!