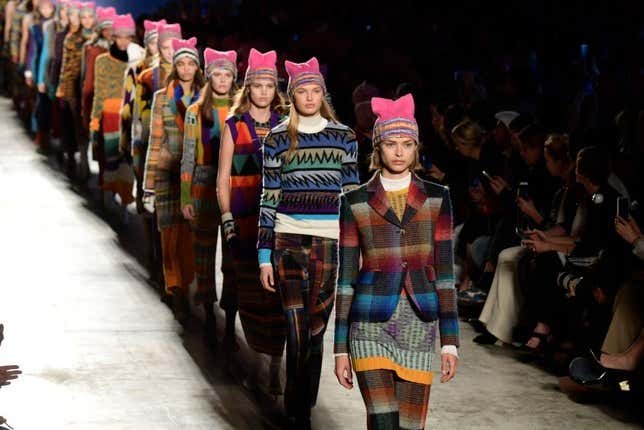 Freep – A year ago, they stormed the streets of big cities and small towns to make their views known: Women’s rights are human rights. Many wore on their heads what became the de-facto symbol of feminism in 2017, the pink pussyhat.

The Women’s March is back in 2018 with its Power to the Polls anniversary protests on the weekend of Jan. 20-21. …
But this time when marchers take to the streets in cities from Lansing to Las Vegas, there could be fewer pink pussyhats in the crowds.

The reason: The sentiment that the pink pussyhat excludes and is offensive to transgender women and gender nonbinary people who don’t have typical female genitalia and to women of color because their genitals are more likely to be brown than pink.

“I personally won’t wear one because if it hurts even a few people’s feelings, then I don’t feel like it’s unifying,” said Phoebe Hopps, founder and president of Women’s March Michigan … “It doesn’t sit well with a group of people that feel that the pink pussyhats are either vulgar or they are upset that they might not include trans women or nonbinary women or maybe women whose (genitals) are not pink.”

Well chalk one up for all strong, vocal feminists like me, Emma Watson and ScarJo who didn’t just mindlessly jump on the Pink Pussyhat bandwagon without thinking. Who refused to go along just to get along. Who didn’t do the easy thing and allow ourselves to be Pink Pussyhat-shamed. Not because we don’t support equality and opportunity for women. We do. But because we saw how this would exclude with non-traditional vaginas and vaginas of color.

Sorry but not sorry if my brand of feminism celebrates all female genitalia equally. Not just the ones that fit some narrow definition of genital beauty handed down by the patriarchy. For too long society has tried to dictate one orthodoxy when it comes to female bathing suit areas. And I was frankly appalled at how Big Pussyhat pushed its agenda without a single thought for nonbinary, non-pink genitaled women. So shame on all of you who marched last year without thinking of the people whose feelings you hurt.

And just for that reason, I’m going to skip the marches on Jan. 20-21. Instead I’m going to stay home, watch the conference championship games and get drunk. As a silent protest, in solidarity with non-typical female genitalia everywhere. It’ll be a sacrifice, but I want my voice heard on this very important issue.