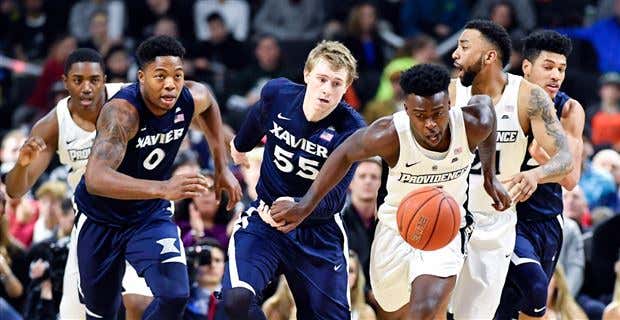 It’s a perfect day to slap on some sweats, order some wings and nachos while sipping some bourbon and watching the best slate of college basketball games so far this year. There are way too many games today, so I’ll be breaking the blog up to early/mid/late night games. It will just flow a little easier and keep blogs to less than 3000 words, which I assume most people don’t want to read/don’t have the attention span for. If you have any ideas on how you’d want these previews to look, especially for Saturday slates let me know. I’ll be on Twitter all day talking about the games @barstoolreags. Let’s get right into it.

For a variety of different reasons, most notably injuries, Providence have been one of the most disappointing teams in the country this year. They should have been the clear No. 4 team in the Big East and now they have a lot of work to do to get to the NCAA Tournament. They can get a big step closer here with a win over Xavier. The question is does Rodney Bullock play for Providence. If he doesn’t Xavier is going to run away with this. I also am curious to see how Kyron Cartwright plays. He hasn’t been right this year, but played extremely well against St. John’s. Xavier has closed teams out due to being one of the best free throw shooting teams in the country. I expect that again, even on the road.

Another game now between two different bubble teams and one that is worth slapping on TV2 in the early slate. Alabama obviously has all the talent in the world with Collin Sexton and John Petty, but what Georgia and Mark Fox does is different than most in the country. Fox prides himself on throwing out different defenses and will play a bunch of junk defenses. He has no shame in making the game ugly, which says more about his ability to coach than pride like most coaches have when it comes to just running man-to-man despite not being great at it. Alabama needs to score at the rim and Georgia will sit back and sag, similar to what we saw them do against Kentucky. I like Georgia at home here and think Yante Maten can have a really big game.

So, uh, this Clemson team is well, actually good. It’s also the most Clemson thing ever to miss the tournament with Jarron Blossomgame only to make it the year after and be the favorite to land Zion Williamson. What a year for Brad Brownell, who many thought was going to get fired after last year. What Clemson does is defend and then have balance on the offensive side of the ball. They have 5 guys score between 11 points and 16 points per game, but then no one else scores above 3. For Louisville, man, is it a tough situation for everyone there. You have to assume the fact they are dealing with a new coaching staff right before the season started and all the other shit going on is really starting to mess with them. This team shouldn’t look as bad as they do, but they are 18-22 year old kids. They continue to play big, but Clemson can handle that. Don’t be surprised if Clemson finished in the top-4 in the ACC.

Speaking of top teams in the ACC, Virginia is one of the two best teams in the country. What makes them different this year is the fact they can attack offensively. In the past they would go with a lot of false motion early and then look to get the ball to someone like Malcolm Brogdon. This year, the three in the backcourt; Guy/Hall/Jerome is shooting a combined 45% from the 3-point line. They look to attack offensively while the defense is obviously still there. I’ve obviously been not as high as the public on UNC this year and they’ve really struggled the last 5 games. Throw in the fact that JPJ is one of the more underrated homecourts in the country and this one could get ugly quick if UNC doesn’t come out playing well. What makes this such a tough matchup for UNC is the fact that Virginia takes away literally all of its strengths. They get back so you can’t get out and run – what UNC wants to do. They rebound extremely well – UNC needs offensive rebounds. They double the post – that’s where UNC likes to play, inside out. Virginia has the capability to make a Final Four.

While I was down on UNC, I’ve been super high on this Seton Hall team since the preseason. That has stayed true as I love the way they can attack you offensively and they’ve all accepted their roles. Desi Rodriguez might be the toughest person to stop when he gets the ball up top and drives left. Angel Delgado is getting double teamed every possession and not forcing anything. Butler is coming off that great win against Villanova and then a loss on the road to Xavier. That said, I don’t think Butler hits 15 threes in this game. I really like Seton Hall here, even on the road. I think this Butler team will be more streaky this year as they’ll pull out some great wins and then look very average – really, just what we saw in the Georgetown game. Expect Butler to get the ball to Kelan Martin early and see if they can find a mismatch there, but Seton Hall will likely throw Ish Sonogo – one of the best defenders in the country – on him. So then can Kamar Baldwin play for all 40 minutes consistently?

So Notre Dame is going to be without Matt Farrell and Bonzie Colson for this game. To quote the best punter that works for this here website, Yikes. If Syracuse loses this game, you might as well slap the NIT detail on the Carrier Dome. What I’m curious about here is does Notre Dame revert back to what we saw years ago under Mike Brey. They’d sit there, dribble the shot clock down and then run a high ball screen or perhaps a curl screen on the wing. They’d send everyone back defensively and just really take the air out of the ball. I hope that doesn’t happen because that basketball sucks. Syracuse should win this game. As for Syracuse though, they need to start getting some road wins. They have been quality at home, but I question how good of a road team they are. In order to make the NCAA Tournament, they need to steal a couple of road wins. That loss to Wake Forest will hurt them, but if they come out and blow out Notre Dame, it can help. Remember, the committee only takes into count players missing for the losing team, not the winning team. So if Notre Dame can stay a top-50 team, Syracuse will continue to have a quality win.