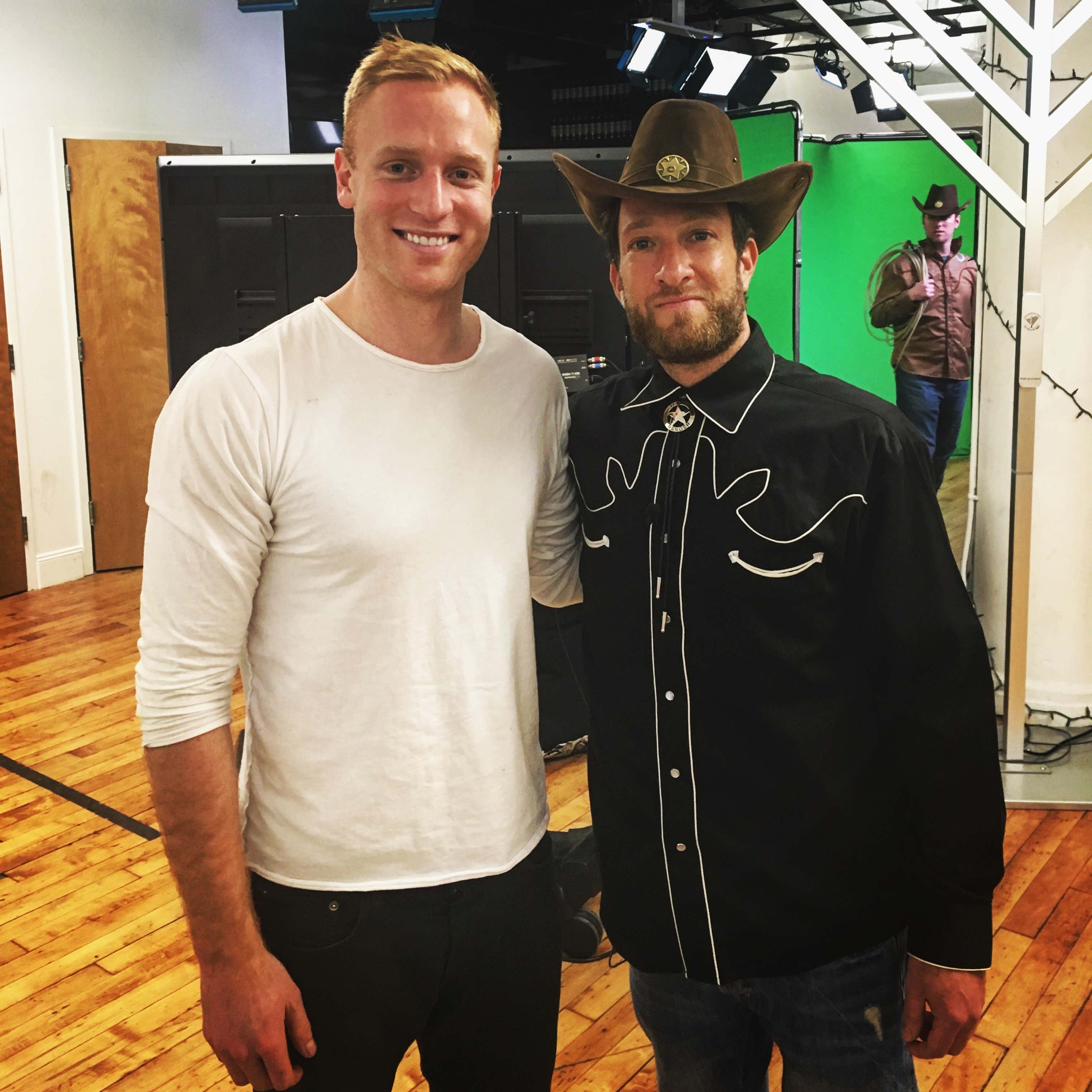 Given the anxiety-inducing nature of our job at Barstool Sports, our beloved boss gives us a week off at Christmas. I went home to Maine but returned on Tuesday, the 26th, because I had bought my flights before I knew the office would be closed. I returned from the frozen coast of Maine to find the city in limbo. The four disorienting days between Christmas and New Years weekend are tricky days to manage, especially if you don’t have work. The city is filled with tourists while native New Yorkers are either away on vacation or working distractedly, eyeing a second long weekend in a row. I filled my evenings with standup shows, but my days lay empty and mindless before me. Naturally, I turned to drink.

I’m not a huge drinker. I typically booze about 2 nights a week, and I don’t ever black out because I usually throw up first. My friends call me a pussy because of this. Once, my doctor asked me how many drinks I typically have on a night out, and I said somewhere between 7-12. He gasped. He did not think I was a pussy; he thought I was the man. It’s very hard to find that sweet spot of being a “cool drinker.” If you don’t drink enough, you’re a pussy. But if you drink too much, you have a “problem.” Nobody wants to be a pussy or a problem, but that middle kingdom of coolness is vague and elusive. Over the course of the last 6 days, I sought to find the “cool drinker” space. Some nights I found it, and some nights I woke up with my arms shackled to the wall with no clue what the safe word was. Not cool.

Who was my companion through this soul-search? None other than Davey Pageviews himself. Now let me clarify–Dave and I did not intend to embark on this journey together. Not once did Dave make me think he wanted to hang out with me. But night after night, day after day, we found ourselves laughing it up and throwing them back, on opposite sides of the same bar.

It all started on Wednesday, December 27th. I was in the West Village and went to get a haircut at a trendy barbershop. As I’m sitting in the barber’s chair, watching my sides disappear at the hands of a Puerto Rican gentleman with lots of a tattoos, I feel a tap at my shoulder. I turn and… boom–the legend himself, El Presidente, is smiling at me. “Hey Francis,” he said. I was so excited to see him that I totally flubbed my response. “Holy shit! Hnnnnhghhhh hey boss!” I stammered. The realization that Dave and I were having our hair cut at the same place, at the same time, on the same day, was too much for me to handle. Here we were: two funny guys in the prime of our lives, living it up in the big city, getting our hair cut. I quickly thought about inviting him to go cross-country skiing with me in the woods. We’d find a cabin, share a blanket, drink sherry and laugh until we fell asleep in front of the fire. But I held back because guys are weird. They never say what they truly feel. Still, I was glad I had I refrained from pitching that super gay idea; chances are, it would have scared him off. But as Dave sat down in his chair, I desperately wanted to ask one of the barbers to take a picture of us getting our hair cut together so that I could tweet/instagram/Christmas card it. Again, I didn’t, though the restraint nearly killed me. As I walked out of the shop, I said goodbye to Dave. “See you next week back at the office!” I offered, not knowing that I would see him much sooner.

That night, I went out and crushed a bunch of brews with my friends. Probably had like 14 or something. It’s not like I was counting, but I did keep all the bottle caps from every Corona I drank so that I could figure it out later. It’s a trick I was taught in a college alcohol awareness seminar. By filling your pockets with the tabs or bottle caps from each drink you have, you can wake up the next morning, spill them on to the floor, and immediately kill yourself.

I’m fairly sure I hit the “cool guy” slot that night but you’d have to ask other people who were there. The next day, I nursed a hangover, wrote a couple shitty jokes, squatted 265 for 4 sets of 10, and napped until my shows. Around 10, I met my friends at a bar. Back off the wagon, I was slugging some delicious Coronas when some dumb girl asked me if Barstool was having a party at the bar. I said, “not that I know of sweetie pie, why do you ask?” (Sometimes, I will refer to girls as “sweetie pie” even when we are strangers. It confuses them, which gives me the upper hand. Confuse your enemy, then kill them in their sleep). She pointed across the bar and said, “Dave’s here too.” And there he was, like a shimmering, heaving stallion emerging from the woods to graze on the dandelion stems of a sunlit meadow. Or an otter sliding out of a pond onto a warm rock, sleek and shiny. Or a brand new Mercedes emerging from a car wash, soaking and fresh. Or a submarine breaking the surface, moaning and sweaty. Dave motherfuckin’ presidential Portnoy. I couldn’t believe my eyes. Not 36 hours earlier, we’d sat 6 feet apart while getting our hair cut–one of the manliest bonding activities you can do. And now, here we were at the same bar at the same time on the same night. “God,” I whispered, “thank you.” I crossed the bar, rehearsing what I would say. “You know, we should probably move in together given how much we’re hanging out.” Nope, too gay. “Let’s enable location sharing on our phones to make this easier.” Ugh, still too gay. Whatever, I’ll just shoot from the hip. I tapped him on the shoulder and said “Hey Dave” like a cool fuckin’ dude. He laughed, we joked about seeing each other again, and then I pretended as though I had to go to the bathroom, to make it seem like that had been my agenda all along. Then, I went into the bathroom to uphold the ruse. As I stood over the toilet with my pants fully buckled, not peeing at all, I giggled like a school girl. “2 nights in a row,” I said, tears of joy rolling down my cheeks. “I think this is the beginning of a beautiful friendship.”

But surely, that would be the denouement of our serendipitous encounters. Philotes, the goddess of friendship and sex, does not cast her spells thrice upon a pair of mere mortals, inextricably linked and falling fast. Right? Wrong. The next day, Friday, saw me following a now-familiar routine: breakfast, write, deadlift 275 for 3 sets of 10, nap, shows, booze. By now, I had no idea what day of the week it was. Time and gravity were forces that paled in comparison to the magnetism that was fizzing between me and Barstool’s founder. Quite literally, whenever Dave and I were within 10 blocks of each other, you could feel the hair stand up on your arms. Fucking. Electric.

I headed to another bar to meet up with some friends around 9. As I walked in, one of my friends pulled me aside. “Dude, you’ll never believe it but Dave is here.” I almost punched him in the face. “You’re fucking with me,” I screamed. “How dare you tease me like that?” As he tried to remove my hands from his neck, he managed to wheeze out, “see for yourself.” I followed his gaze and sure enough, against all odds, not 10 feet away, held by the cradle of fate, was Dave. I can’t remember what he was wearing because I was so focused on his face. The smile that launched a thousand blogs lit up the room, sending uglier women scattering for the darker corners of the bar. He was surrounded by adoring fans, taking pictures because that’s just the type of guy he is. Jealous, I sauntered over. By now, I was resolute in the knowledge that nobody hangs out with Dave more than me. I almost called Frankie to come take a picture of us, to show him how irreversibly forgotten he was. “Hey Frankie, take a picture of Francis and Dave, two guys who think and dress similarly. And bring us a pizza, you little lesbian.”

But I didn’t call Frankie, because Dave was mine now, and gloating is an ugly shade of vanity. I pushed my way through the throng of sycophants. “Daaaaave,” I said coyly, spreading my arms for a hug. He didn’t give me one but he did shake my hand. “This is wild,” he acknowledged, turning to a friend. “I’ve seen Francis too much over the past week.” I’ll admit, that was a strange thing to hear coming from my best friend. Too much? It was loud in the bar, and I may have misheard it. It also sounded like “I’ve seen Francis not enough and I want to go on a trip with him.” It was probably that, honestly. That would make more sense.

We went our separate ways that night, but we both felt extremely satisfied as we walked home along frozen streets, our breath swirling in the air, the salted sidewalks crunching beneath our shoes. One thing was clear: the contest for best man at my wedding was over.

How would I describe my friendship with Dave? One word: mutual.