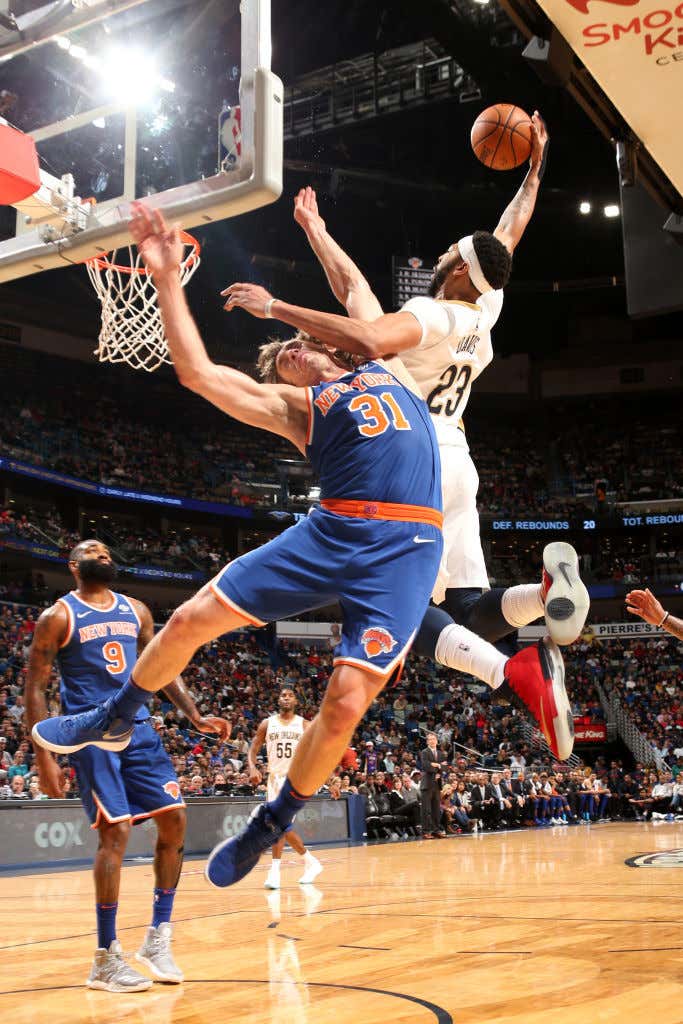 Welcome everybody to another edition of Last Night In The NBA where we catch you up on everything that happened from the night before in the Association. Considering it was Saturday night during a holiday weekend, chances are you may have missed some things from the 7 games that were played last night, and while I’m sorry to tell you that you missed some exciting basketball, I’m happy to tell you all about it. Here’s what happened

Admit it, not even Pistons fans saw this coming. Especially given who they are missing from their lineup, a double digit win over the mighty Spurs is up there in terms of one of DET’s best wins of the year. They defended their asses off holding the Spurs to just 36/19% splits with 14 TOs. They never gave up more than 23 in a quarter. A quick lead was essentially blown by halftime, and the Pistons kept pushing.

A surprise 22 from Reggie Bullock which was a career high

this was a very weird Pistons win. Usually you would think if they were able to beat the Spurs their main guys probably went off, and things were pretty balanced. But Harris/Drummond combined for just 26 points and they had a starter not score a point and just two other guys on the bench combine for 6 points.

For SA, hard to win on the road when you shoot like that, and Kawhi and LMA are the only players to score more than 10 points

This was a big win for DET because they are about to hit a brutal stretch where 5 of their next 6 are on then road.

A classic backcourt vs frontcourt matchup. Two guys for each side doing a majority of the damage, it was the Heat that came out on top with the much needed road win. A nice 31-19 fourth quarter sealed the deal, officially bringing the Heat back from an 18 point deficit which is something we’ve been seeing a lot of lately. They did it because Tyler Johnson and Goran Dragic were ridiculous, a sight I’m sure the 5 or so Heat fans that are left were happy to see

Also getting 17/6 from Kelly and 4 made threes from Ellington sure helped. The Heat figured out a way to stop any transition offensive in the second half, and as a result they did not have back to back brutal losses. Already having lost to BKN the game before, and already have blown ORL out the game before that, here’s why this win was important. MIA now sits just 1 game behind WSH in the Southeast division, which mean before you know it this team could be a 5/6 seed if they keep winning. All while dealing with some pretty major injuries, that’s impressive.

For ORL, what, you thought you were going to win 2 games in a row? You haven’t done that since early November. I will say, you did have some pretty sweet performances from, Aaron Gordon and Evan Fournier

Now this was an entertaining game, even though we witnessed a murder. Let’s just get this out of the way early

A moment of silence for Ron Baker and tall gangly sort of athletic white dudes who hope to play in the NBA everywhere please. How can Ron Baker be Ron Baker and not know the don’t jump rule? What you thought you were going to block ANTHONY DAVIS here? AD didn’t even feel you man. Happy he’s OK and just got stitches, and thankfully his team got the win because yeesh.

About the win. Thank you Porginzis is what every Knicks fan is probably saying

Finally back to dropping 30, Porzingis was willing to go toe to toe with AD and he did a pretty good job at it. His 7 straight points tied things up with a minute to go, and Jack closed the door.

For NO, of course their two bigs were completely dominant

60/28/5/5 on 20-43 shooting is pretty damn good I’d say. It didn’t look like the Knicks had any answers as to how to stop either of these guys in that second half, and that 8-0 run to start the fourth looked like it might have been enough. The Pelicans did have an opportunity to make things interesting on their final possession, but AD decided to go for the win with a pretty open 3. That’s surprising considering him and Boogie are two of the most dominant big men in the NBA, why not try something a little closer? You live and die with whatever AD decides to do, not like he can’t make that shot, but they didn’t exactly need the three.

Oh and I could watch Rondo pass till my eyes bleed

I’m not sure what got into the Hawks in the second half of this game, but they may want to figure it out and then never do it again so it doesn’t mess with their lottery odds. Holding the Blazers to just 37 points, the Hawks looked like a completely different team. There was energy, they were making shots, and they took care of then ball. Schroder as he usually does led them with 22/8 in 9-17

For POR, boy do they need Damian Lillard to get back. While Napier has done a great job filling in, he had 21/8/6 last night, it’s clear they miss their best player

Only three starters in double figures and not much from the bench, you’d think POR would still be able to win this game, and they did dominate areas like in the paint  and second chance points, they just went cold as shit in the second half. Things get tricky for them in the new year, with CHI/CLE/SA/OKC/HOU/NO/MIN in their immediate future, so hopefully Dame feels better.

For some reason, Lebron teams struggle in Utah, and this team is 13-6 at home so it’s not all that surprising. To beat a team like CLE you basically need to play near flawless basketball, and that’s what the Jazz did. They turned it over just 11 times and their better players stepped up. You saw Mitchell’s 29 and game winner, but don’t sleep on Favors and his 19/6/1/3/1 on 8-11 shooting

After making it a 5 point game at the half it was the Jazz that came out firing in the 3rd, and sure they had to hold on for dear life to win it, but when you have a special talent like Mitchel at your disposal, this isn’t really a problem.

For CLE, I guess all the Jazz had to do was stop Lebron, Love, and…..Jeff Green?

I’m sure when Kevin Love made that three with a minute left to give the Cavs a 1 point lead it probably felt like things were over. But CLE couldn’t execute down the stretch and the rest is history. Kind of crazy aside from Lebron/Love the rest of the starters combined for 8 points. Good news for Cavs fans is Tristan Thompson did start to look like Tristan Thompson coming back from his injury, and Jeff Green continues to have a great year off the bench. Despite that, I would imagine many Cavs fans probably think this was one of the more shitty losses on the year, but you have to credit UTA on getting it done in high pressure situations.

Curry came back. That’s all I’m going to say about it, just enjoy the fucking dominance

For MEM, what can you expect to happen on the night Curry finally returns after that kind of absence? I give you credit for even showing up. I mean it’s not often you shoot 52/71%, make 15 threes, turn it over 7 times and lose. In fact I’m pretty sure it almost never happens. That’s crazy.

I continue to watch Grizzlies games because I am facinated with the new and improved Tyreke Evans. I need him on the Celtics bench so bad it’s not really funny. Another 22/9 on 9-16, just make a deal already. MEM isn’t keeping him, they don’t own his Bird Rights, everybody knows it.

Congrats to the Sixers on snagging their second win on the year with Embiid out of the lineup. Proud of you. Especially on a night where Ben Simmons was essentialyl a nonfactor with his 6/6/6 and 5 TOs on 3-9 shooting. Good news is other guys stepped up like Saric who had 20/7/6 on 6-15

and a nice 15/10 from Covington on 6-11, which was a pleasant sight I’m sure because his shot as been struggle city the entire month of December to the tune of 38/34% splits. JJ Redick continues to win the bet he made on himself with 18 points on 8-15

and while it pains me to say on a night where UofA beat ASU late, Jerryd Bayless was pretty huge for the Sixers, they probably don’t win without his second half

Sixers need all and any win they can get, and a road win in DEN is a pretty good one to snag.

For DEN, listen, I’m sure whoever runs your social media is a nice person. Perhaps they are even a stoolie who may be reading this right now. If that’s the case, I have just one thing to say: You moron.

What happened next you say? A second half in which DEN scored just 41 points. Almost like their offense was cursed in that third quarter where they scored 19 points and couldn’t make a shot wouldn’t you say? How can you be an NBA account and not know about Lil B? The guy single handedly ruined KD and Harden, and his blessing saved the Celtics season. Not exactly the type of voodoo you want to fuck with. So yeah, you had guys play well like Jamal Murray who had 31/8/3

Jokic was dominant self with 19/13/6, but none of it matters because you messed with the wrong rapper who most definitely impacts the results of NBA basketball games. Again, you morons.

At the end of the night, you knew it too

And that’s it! You’re now all caught up on everything that happened last night in the NBA. I know it’s the last NFL Sunday of the regular season today, but we also have 8 games today including CHI/WSH, MIN/IND, and LAL/HOU to name a few, and as always if you miss anything just come around here tomorrow and I’ll fill you in.