I was home in Maine over Christmas. The weather was abysmal. On Friday, we had 6 inches of snow. On Saturday, it turned to freezing rain which mixed with the snow to create a pancake of ice across the roads. Driving became a life-threatening exercise, but remaining in the house with my family for 48 straight hours was equally suicidal. My dad and I had been chipping golf balls into a chair in the basement to the point where we’d worn a hole in the carpet. The exploded carcasses of board games were strewn across the living room, their pieces scattered under couches from various nuclear meltdowns from a losing participant–mostly my handiwork. I had checked the contents of the refrigerator every 20 minutes like a security guard making the rounds. Even the dogs were restless, sensing the claustrophobia of our family through the snippiness of our responses. The walls were pushing in and I decided to brave the inclement weather to let off some steam at the gym.

I took the highway, figuring the plows had made the big roads safer. The freeway was empty save for a few lonesome trucks delivering last-minute packages to families in the northernmost corner of the country. I passed a harbor, the boats standing at attention in the half-frozen bay, small ice flows propelled by the tide gently knocking into their hulls. The snow had laid a downy blanket over the landscape and everything was quiet and peaceful as I inched along the highway, heeding the blinking signs that suggested a reduced speed limit of 45 MPH.

It was from these calm, quiet diversions that my focus was suddenly taken by the car ahead of me. I had reached my exit–a sharply curving off-ramp that most drivers would approach with caution and humility. But the car ahead of me was piloted by a young man whose love for speed had propelled him to star on his cross-country team. Daring, reckless, and addicted to adrenaline, Joe Skerritt’s instagram bio says simply, “I like to run and have lots of fun.” This is the perfect summary of the young man I came to know following the accident. 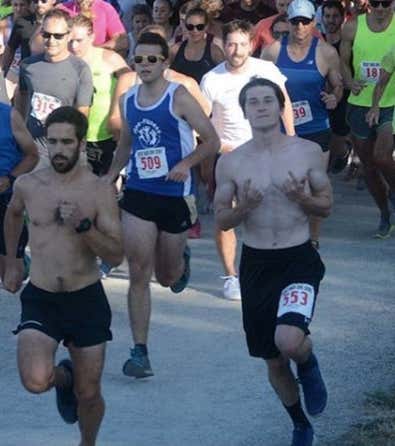 Joe’s car took the curve too fast. The tires quickly lost their purchase and Joe’s SUV slid off the road, down the bank, and came to rest in the deep snow that had been pushed aside by the plows. “Goodness!” I said aloud. “Goodness gracious!” Immediately, images of newspaper headlines flashed through my brain.

The car wasn’t on fire… yet. Perhaps I could stuff a long rag into the gas tank and light it. But there was no telling how much time that would give me. Different rags burn at different rates. For example, if you have a rag made of linen, that fuse might give you 10 seconds. But a rag made of a heavy bath towel or ripped denim could take minutes, or it might not even burn all the way to the explosion. I needed to get this right. I wanted to pull the boy from the car at the last possible moment. Finally, after all the tweets and videos, I’d have my viral moment. Years later, as Joe stands on the Olympic podium with his bronze medal for the marathon, he holds up a sign thanking me for saving his life. I point at the TV and say proudly, “that kid can run.”

Back to reality, I pulled over, undid my seatbelt, and was just about to jump from my car when the young Skerritt stepped out into the snow. He looked confused as I lowered my window.

“Hey man, are you ok?” I asked, keeping my voice level to instill calm in the boy. I had guessed that he was in shock, possibly bleeding internally. We didn’t have much time.

“I forgot you were from Maine! This is awesome!”

“Dude, you just crashed your car. Are you alright?”

There was no reasoning with him. His love for Barstool Sports ran too deep to be distracted by trivial matters like a car crash. Had Joe Skerritt tangoed with death just seconds before? Without a doubt. But to the thrill-seeking #GoPresGo guy, here was an opportunity to discuss the behind-the-curtain intricacies of Barstool’s characters. How much does Big Cat make? What is Pres like in real life? Did Francis really fake cancer? Is Tex demented? There was too much to talk about: too many questions, too little time.

“Listen dude,” I said, trying to return a semblance of perspective to our situation. “You need to get your car out. You need to fix this.”

“I don’t know how,” he responded, grinning.

“Do you have Triple A? You need to call them.”

We sat there for a second. I’d never seen someone respond so positively to a car accident. Finally, I said goodbye, shaking my head. For better or worse, the car never caught fire and Joe Skerritt was totally fine. I took a photo as I drove away and tweeted the story. He responded with his own selfie.

The story didn’t make the cover of the local newspaper. I never got the call from the President. Who knows if Joe will ever make it to the Olympics. However, his mother did thank me on Instagram:

And that praise is enough to warm my heart through these cold winter months. Here’s to Joe Skerritt, whose unwavering devotion to Barstool is rivaled only by his refusal to take his foot off the gas in terrible driving conditions.