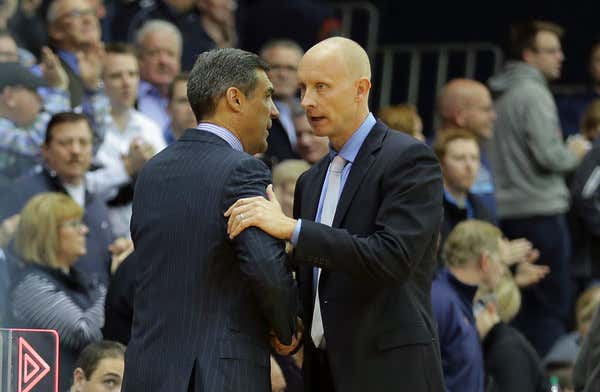 The Big East has officially wrapped up non conference play which means it’s time to take a look at where the conference stands a little more than a 1/3 into the season. It’s yet another year where I believe the Big East is one of the three best conferences in America, which is absolutely huge for the league as they continue to try and shake off the ‘new’ Big East line so many people want to give them. It’s actually quite impressive what the Big East has been able to do with Georgetown – the program the conference was banking on being the flag bearer – being quite irrelevant the last few years.

Life is good for the Big East though. They have the best team in the country. They have a true Final Four threat in Xavier. They have Gus Johnson and Bill Raftery calling games. So with that all in mind let’s look more into the league.

Can anyone challenge Villanova?

Villanova has been the class of the league since realignment and it looks that way yet again. They’ve won the league every year by at least two games and compiled a Big East record of 63-9. They are they heavy favorites yet again, but can someone like Xavier give them a run for the money? History tells us Villanova should regress slightly in shooting as the season goes on, something they’ve done every year before going back on a hot streak during the title year. With the Big East playing a round robin, can Xavier steal a game at Nova or can someone else upset Nova at home? One thing to watch is what happens with Villanova’s rotation due to injuries. They lost a body with Connor Gillespie going down recently, so can someone like Jermaine Samuels get more minutes?

When will Marcus LoVett return?

St. John’s has taken the leap this year that many thought and surprisingly enough it’s come with one of its most important players sidelined to injury. Marcus LoVett hasn’t played in the last five games, after suffering a sprained knee. What’s made St. John’s so intriguing this year is the fact they’ve become more of a defensive team ranking 11th in AdjD while ranking 123rd in AdjO. Most of that is due to guys like Marvin Clark joining the team, but the jump from 131st in AdjD last year to what we see this year is remarkable. LoVett is an offensive player though and one that St. John’s needs if they want to compete in league play and win a game in the NCAA Tournament. He’s averaged about 15 points a game and is shooting 38% from the 3-point line. Throw him in the backcourt with Shamorie Ponds and you have two guys who can create for themselves and break down the defense.

Will Xavier get a consistent third scorer?

Right now it looks to be Kaiser Gates, who is a stretch four for Xavier. The Musketeers are a legit Final Four caliber team and have an All-American in Trevon Bluiett. However, there’s inconsistency after him and Macura. There are two ways to look at this though. On one side you don’t have to rely on just three people and the constant rotation of who is stepping up to be the third guy lets Mack take advantage of mismatches and find the weakness. On the other hand, what happens like we saw at UNI? Macura was inconsistent that game until late. Bluiett was in foul trouble and suffered an injury. My real question is can Goodin/Marshall/Scruggs develop any sort of outside shot. To me Naji Marshall is the one that is capable of doing that and if he starts to consistently hit corner threes, this team should be a Final Four favorite. Another name to keep an eye on is Kerem Kanter, another stretch big, who can really shoot the ball. He’s hit double digits in four of the last six games and has looked like he’s figured out Mack’s system – remember he is the grad transfer from Green Bay.

Will Seton Hall get all four guys going at the same time?

We haven’t seen Seton Hall at its best yet, which is a positive. They’ve looked like a top-25 team all year despite Angel Delgado facing double teams whenever he touches the ball and Khadeen Carrington still figuring out the point guard role. It’s been a weird year though outside of that. Freshman Jordan Walker quit the team after the Rutgers loss due to playing time. He then rejoined the team a few days later. I’m not going to read too much into that because he’s a freshman, who had some high expectations and he just can’t crack the rotation. I’m assuming that was a frustration boiling over thing there. Ish Sonogo was then suspended indefinitely due to a violation of team rules. He’s their best defender and one of the best defensive players in the country. What I want to see though is this team at full strength and Carrington figuring out the point guard role. Surrounding him with Delgado, Rodriguez and Powell should be enough to get them to the second weekend.

Can the middle of the conference stay strong?

What has made the Big East so solid over the last few years has been three main things. First, Villanova has been a top-5 team in the country pretty much every year. Second, the conference has been excellent in nonconference games, especially against other power conferences. Finally, the middle of the conference has always been strong and deep. This is a league that got seven teams in the NCAA Tournament last year and no one blinked an eye. The same can happen this year, but St. John’s,  Butler and Providence all need to be what people think they are/can be. Providence is the one team there that everyone is mostly shocked by. Granted, they’ve suffered through a bunch of injuries, but even at full health something has seemed off with this team and Ky Cartwright – one of the best point guards in the league.