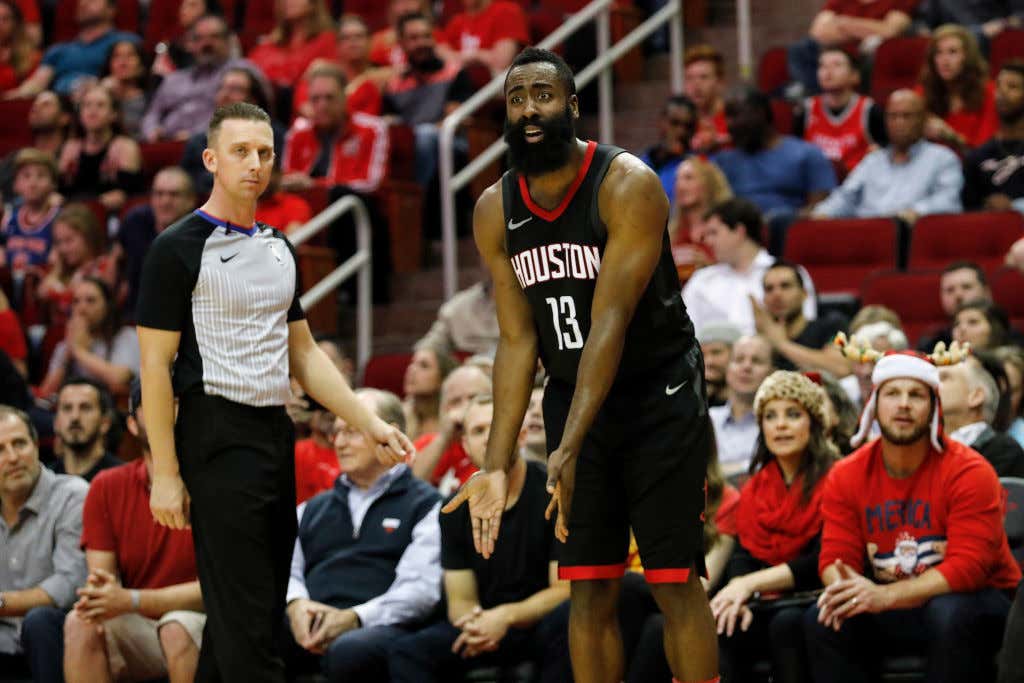 Hello and welcome to another edition of Last Night In The NBA where we catch you up on everything that happened from the night before in the Association. As we all begin our holiday break, perhaps you went a little too hard last night and are feeling it this morning, so I have some good news for you. There were 9 NBA games last night and a ton of shit went down, giving us a lot to talk about. So sit back on your couch, maybe take another rip if you have to so the room stops spinning, and let me tell you about what happened.

Good news for DET fans, it looks like your team has snapped out of that little funk where they lost 7 in a row. Since then, they’ve now won 4 of 5 and are currently the 5th seed, but also are tied with MIL for that 4 spot. They won this game despite Avery Bradley continuing to sit with a sore right groin issue, but when you get 24 points from Tobias Harris

But don’t get it twisted, the Pistons had to fight for this home win. After leading for basically 95% of the game, they suddenly were down 4 with just under 2 minutes to play. With the game in the balance they responded with a nice 9-2 run including a BIG time make from Reggie Jackson.

For NY, while they came up short, the good news is after being held to just 1 point against BOS, Porzingis responded with 29/9 on 12-28 shooting

The Knicks frontcourt was a serious problem because not only was Porzingis back to his old self, but they also got a beastly 22/16 from Enes Kanter

This loss brought the Knicks to 2-10 on the road, and also dropped them to the 9th spot in the East. They have a 2.5 lead over PHI who is 10th, and are tied with WSH/MIA so they could very well be back in the top 8 in a game or two. What’s crazy is that 2-10 road record would be BY FAR the worst of any playoff team. The Knicks are great at home, 15-5, they just need to figure out how to win away from MSG if they want to avoid the lottery.

The Pelicans would have just 3 scorers reach double figures in this game, but when those three players combine for 70 of the 111, I guess that’s not the worst thing. Anthony Davis (20/10), Boogie (26/11/6) and Jrue Holiday (24) were the entire offense for NO, and with their 29-45 shooting it worked out.

The Pelicans have been playing teams tough despite their record. Since they lost to GS 125-115, of their next four losses, three of them were by 7 or less. In fact the last time NO lost by more than 10 was back on 11/29. They still are the owners of the 8 spot in the West, which means if things ended today we’d be getting NO/GS, which I think almost everybody would enjoy.

For ORL, man do you guys stink, but at least Jonathon Simmons had 22!

Go Nets Go!! What a complete roster win for BKN. 6 players in double figures, including 53 from the second unit. RHJ led the way with 21/11/6

Also how bout that Nik Stauskas! 15 points and 4 threes? All in 15 minutes? Not bad

Still no Okafor because apparently he’s not in shape and can’t even play Mozgov’s 8 minutes. At the end of the day though this was a big win for BKN because it snapped their 4 game losing streak and has them with just the 5th worst record in the East. Thanks to a big 35-18 third quarter, and then a 31 point 4th quarter, the Nets easily had their largest win of the season.

For WSH, chalk it up to a night where you just weren’t making shots. As a team they went 36/25%, and when Beal puts up a 2-15 and Wall a 4-11, that’s usually not going to end well. Just two players in double figures and no starter over 10 points, teams have nights like these every once in a while. Now the giving up 119 points thing is a problem, something that doesn’t really happen against the Wizards. They hadn’t given up that many points since a 129 point disaster against CHA. This was the second most points allowed all year. Not a great time for that when you can’t throw a pea in the ocean.

Still without a majority of their main rotation guys, the Heat continue to find ways to win. This time it was scoring 113 points with 63/64% splits. Very hard to beat a MIA team that plays decent defense and then makes 16 threes. I think they have an outrageous record when shooting over 40% from deep, and man you look up and down the roster and no starter missed more than 4 shots, and then off the bench they had Ellington go nuts and make 8 threes. Yeesh

For DAL, imagine going 50/48% and making 17 threes, and still losing by double digits. Imagine having three guys with at least 20 points and still coming up short. Brutal.

This game had everything. High scoring, crazy offensive performances, huge late game swings, collapses, all the things that make the NBA awesome. The Clippers nearly got half their total from just two guys, as Austin Rivers and Lou Williams combined for 68 on 21-46 shooting

Austin Rivers went insane in that fourth quarter, matching what seemed like every Rockets three with a make of his own. His 36 were a career high and the Clippers used a 41 point fourth quarter to get their best win of the year. Really their approach in the entire second half was the difference, outscoring HOU 76-53.

With so much of the offense coming from those two, there wasn’t much need for Jordan on that end, and he still finished with 15/20/2 as the only other starter in double figures.

For HOU, this was just the second time they’ve lost back to back games, and you gotta feel for James Harden. Another 50 point game, another L. That’s pretty rare, and hasn’t been done since Kobe in 2004.

Yeah, no CP3 and no Capela clearly made a difference, but the Clippers are missing like their entire team so I consider that a wash. Fact of the matter is the refs got tricked into some horrific offensive fouls on Harden, and the Rockets lost their shit. Lack of mental composure like you read about. Between the collapse and then Rivers making more dagger threes, a game that was heading for a nail biter, turned into a double digit loss real quick.

Similar to NO, the Bucks got this win because their three main dudes were fantastic. Giannis(26), Middleton (28) and Beldsoe (24) were responsible for 78 of the 109. That’s crazy

Despite the dominance, they needed a huge fourth quarter to pull this game out as they were down 4 with about 2ish minutes left. Credit MIL for locking in and holding them scoreless for the rest of the game.

For CHA, you’re probably thinking you win this game if Kemba didn’t have to leave with a mystery injury. He was torching the Bucks, and led all scorers with 32

It also doesn’t help that they lost Dwight right at the start of the game with a fucked up finger, so credit to them for at least keeping it close. Bad news is, CHA is now 2-12 on the road. That’s kind of a problem. I know they had injuries early, but it’s looking more and more like a lottery season for CHA.

You know how the Thunder were reaaaaalllly bad at late game crunch time situations to start the year? I mean like 1-9 bad. Well, they’ve rebounded, going 8-1 since. They’ve now won 9 of 12, and they can thank the improved offensive efficiency of Russell Westbrook for this turnaround.

53/52% splits as a team is usually going to get it done for OKC, and while things may have looked dicey when they lost the 3rd 31-18, we’re starting to see them get comfortable in late game situations, and that’s a huge step for them. They’re doing their best to keep pace with MIN, and they are playing some of the best defense in the entire conference. That division is going to be fun as hell as the year continues.

For ATL, nothing you can do about a Westbrook pullup three. When he’s locked in like that, you tip your cap. The good news is you gave OKC everything they could handle and got some nice performances from Belinelli, Illyasova and Delaney

27/9/6 it appears that he’s over his ankle injury and that’s good because when he’s healthy the dude is an absolute monster. The Nuggets also got Garry Harris back in the lineup who went for 17 on 7-12, and Wilson Chandler had a very solid 21/11. This win snapped a two game skid for DEN, and has them tied with OKC and every bit in the race for that 4 spot in the West.

What I don’t get is what the hell they are doing with Kenneth Faried. Another DNP-CD, just trade this dude! You clearly have no interest in using him for whatever reason, and he’s a young asset on a good deal. You can definitely get something of value for him. #FreeFaried

For POR, tough division loss which brings them to a 7-10 mark at home. That’s surprising as hell. They’ve now lost 3 in a row, two to division opponents, and they’re just 3-8 over their last 11. You can see how this team looks when Dame is out of the lineup. No starter stepped up to be the second scorer next to CJ McCollumn, and with two quarters under 20 points, that’s not going to cut it against a team like DEN that can get buckets like the best of em.

The Warriors now own the top spot in the West, and even without Curry have now won 11 in a row. Durant with another 33/7/7 to lead GS

at what point do we start to hear his name a little more when it comes to potential MVP? They’re the Warriors I get it, but with Draymond/Curry missing pretty serious time, he’s carried GS to the best record in the league.

But we know Durant is good. To me the story here was the night from Jordan Bell, who of course is turning into a pretty good player

Insane that CHI felt they couldn’t use this guy, and credit the GS front office for seeing an opportunity and writing a check. The more you watch him the more he reminds me of a young Draymond, which is entirely unfair. Also most importantly, he’s extremely self aware

For LAL, yeah tough loss, but who expected you to beat GS in GS? You should care more about how good Lonzo and Kuzma looked against the best team in the league. They were both really really good

Kuzma out here doing shit for the Lakers that hasn’t been done in 50 years. He’s the first rookie with 25+ points in three straight games in that long. That’s WILD. He’s basically turned into another lottery type talent for them, which is good for them, and annoying for everyone else.

And that’s it! You’re now all caught up on everything that happened last night in the NBAd. Things are just as busy today with 13 games on the schedule including CHI/BOS, PHI/TOR, NO/MIA, OKC/UTA, DEN/GS, and POR/LAL. As always if you miss anything, I got you tomorrow.