Newsweek- Princess Michael of Kent, the wife of Queen Elizabeth’s cousin, wore a controversial blackamoor brooch to a Christmas lunch at Buckingham Palace on Wednesday. The lunch was attended by several members of the royal family, as well as Prince Harry’s bride-to-be, Meghan Markle, whose mother is African-American.

Michael’s brooch, which depicts a black man in a gold turban, was pinned on the left side of her coat. She was spotted wearing the blackamoor, considered a racist artifact, during her ride to the Palace.

Created by Europeans sometime during the 18th century, the figurines are usually made as jewelry or small  sculptures and often depict a black male wearing a headdress, representing a servant.

The private event was a first for Markle, whose engagement to Harry was announced in late November. It also marked the first encounter between Markle and Michael.

First off, Princess Michael? The fuck kinda name is that for a princess? I’m all for gender curveballs in 2017 but Michael is the least princess-y name I’ve heard in quite a time. Princess Michael is what you call your friend Michael when he gets mad at you for not covering a sneeze.

Secondly, how anyone is surprised that this lady is racist… 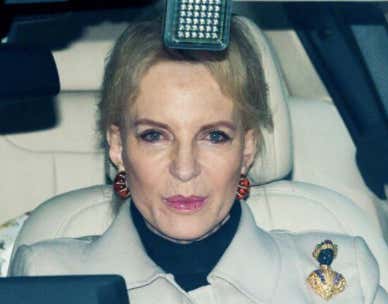 … is beyond me. Look at that face. That’s Cruella De Ville. She is melting the film in that camera with her evil telekinetic brain. Pursed lips and devil eyes like you nightmare about! What do you expect from a woman so old that she actually owned slaves herself? That brooch isn’t a symbol of her racist beliefs; it’s a way for her to remember the man who used to fan her with palm fronds when the sun was fierce.

Michael, who is married to Prince Michael of Kent, a grandson of King George V (Queen Elizabeth’s grandfather), has not offered any comment regarding the brooch. However, she has been accused of racist behavior in the past, specifically of insulting black guests at a restaurant in New York City in 2004. Diners said Michael complained about the level of noise coming from a nearby table and suggested they “go back to the colonies.”

Exactly. That’s not 21st-century racism, folks; that’s 19th-century imperialist racism. “Go back to the colonies”?!?!? LOL. Hey Mike, the colonies aren’t yours anymore; they’re independent countries now. That’s been the case since like the 1960s at the latest. While it’s almost refreshing to hear your old-fashioned take on “go back to Africa,” it might be time to update your software.

She staunchly denied the claims while appearing on a British television show, explaining that she has never had negative encounters with black people and offered her travels in Africa as a defense. “I traveled on African buses. I wanted to be a writer. I wanted experiences from Cape Town to right up in northern Mozambique. I had this adventure with these absolutely adorable, special people and to call me racist—it’s a knife through the heart because I really love these people,” she said.

The picture could not be more clear. Listening to a British royal refer to Africans as “adorable, special people” and think that traveling on buses with them makes her not a racist is so cute. But to refer to them as “these people?” THESE PEOPLE? Boy, I’ll tell ya–Meghan Markle has her work cut out for her.