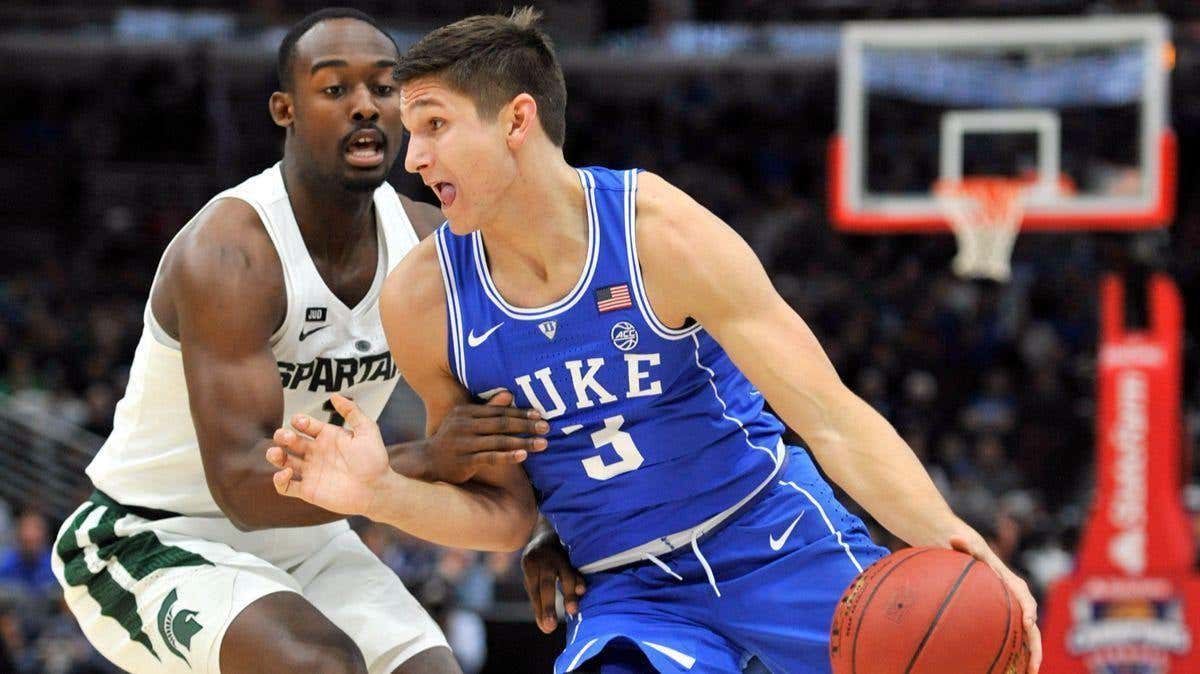 So it’s another slow week in terms of slate of games this week. Schools are still finishing up exams and while it’s a little better than last week, it’s not great. That means we have another week of writing different kinds of blogs that aren’t game previews or recaps. I talked about Trae Young, who is the early favorite for National Player of the Year. Also talked about Michigan State’s defense and the blueprint for mid major success.  We then spent time talking about Kentucky’s offense. In the past I broke down Villanova’s offense among some other things. We’ll be doing different scouting reports throughout the week – so if there’s one in particular, or any other idea – send them to me on Twitter @barstoolreags

Today we’re going to fix college basketball. Listen, I love the sport. It’s my absolute favorite thing in the world but anyone can admit it’s flawed and it’s severely flawed in some areas. Now, how can I get these things accomplished? Well, if I learned anything at my time here at Barstool it’s just that I have to go downtown Indianapolis with a few friends, sit in the middle of a lobby at the NCAA headquarters and make my presence known. Mark Emmert will be out in no time and I’ll be able to step right on in as commissioner of the NCAA.

So this is my list. This is what I’d like to see done to change college basketball for the better. Now, don’t get me wrong I love the sport as I mentioned before but it’s not close to perfect. Note, we’re not going to bring up paying players (I’m all for) simply because the post will get too long then. So outside of payment/monetary things, here are 13 steps to fix the game:

1. Move to four quarters and reset the fouls – Pretty basic here. College basketball is the only game in the country that plays with halves. There’s no rhyme or reason to it and there’s no reason not to switch. Right now there are 9 guaranteed stops to the game with 4 TV timeouts in each half and halftime. You can keep the sponsors happy and ad money coming in by doing stops after the 1st and 3rd quarter, halftime and then TV timeouts at the 5 minute mark of all 4 quarters. Now with resetting fouls, this will help with the foul calls that we’re seeing. Remember the national title game? Of course you don’t because it was borderline impossible to watch due to the lack of flow and constant free throw shooting. Resets fouls at the start of each quarter. Go like FIBA and the NBA where the bonus starts on the 5th foul. Fouls 5-7 can be 1-and-1 and then anything over 7 in a quarter you’re shooting two. In fact, I’d follow the NBA a little bit more here and say only defensive and loose ball fouls count towards the team total. Let’s avoid constant free throw shooting contests.

2. Defensive 3 seconds – If there’s one call college refs consistently struggle with it’s the block/charge call. They’ve instituted the circle under the basket to help with that, but it still gets called wrong more often than not. Now, while I’d love to get rid of the charge completely, the best and most logical thing to do is defensive three seconds like there is in the NBA. There are limited charge calls in the NBA and that’s because there’s space in the lane. People want to see offense vs good defense. This will force more teams to go man-to-man or at least extend the zone. Less congestion in the lane, the more cuts we see and the less charges we see.

3. Change from 5 Fouls to 6 Fouls – This is the biggest debate in college basketball right now and personally I don’t see it as one. There’s absolutely no reason to leave it at five fouls. The way the game is officiated (rather poorly and inconsistent) to how athletic these guys are, it’s time for this to change. The only two reasons people give me to keep it at 5 fouls is the NBA is 48 minutes therefore you get 1 foul per 8 minutes and to teach defense without fouling. Both are beyond dumb. If you believe that first one, do you believe high school basketball should go to four fouls because it’s 32 minutes? On top of that, don’t you want to see the best players on the court longer? Too many times games are decided by who has the better 8th or 9th man. That’s not entertaining. The argument that ‘there will be more fouls?’ is also a little absurd. You’re talking at most one or two more fouls committed per game and again that will be by better players. Again, I want to watch the best players here.

4. No more hanging on the rim technicals – In fact, hanging on the rim should be encouraged. This is by far the dumbest technical foul rule in the game right now and we’ve seen some just bad calls because a ref wants to hear his whistle. Dunks are fun and exciting, if a kid happens to spend an extra second on the rim who is it hurting? Let’s all stop pretending like we care about sportsmanship and showing up opponents. If you played competitive sports at any level you know what happens between the lines. If you don’t want to see me celebrate keep me off the rim.

5. Reviews can only go to 1 minute and no huddles – I don’t have a problem with replays and making sure the call is right. However, it can’t take a 5 minute delay to look at a call. There are three officials on the court plus one on the bench. One official needs to be on the floor at all times and not letting the teams go towards their own bench. Don’t give teams a free timeout, especially late in games. From there the other officials have 1 minute to review the play. If they can’t determine a call in that 1 minute time frame, the call stands and play resumes. Too often these things are dragged out and just disrupt the flow.

6. Start the season in December – Right now the first month of college basketball gets buried and we actually get some great games in that time frame. The schedule isn’t favorable to the sport. When college football dies down as it is right now, college basketball is playing a bunch of nobodies and everyone is getting ready for conference play. Start the season in December and have that first Saturday after conference championships in bowl games be a huge slate of games. Have that be where the Maui/PK80/Atlantis all run. I’m not dumb. This is always going to take a backseat to football and even the NBA to a degree, but have the season run from December to April. Yeah, April Madness doesn’t have the same ring to it, but I bet people still tune in. College basketball needs to take advantage of this time of the year and they simply don’t.

7. The major 6 conferences play a conference battle – Right now we have the Gavitt Games (Big East/Big 10), ACC/Big 10 Challenge and SEC/Big 12 Challenge. We need to get the Pac-12 involved here so I suggest moving it as such. I know people want to keep the ACC/Big 10 Challenge so let’s go ahead and keep that. From there go SEC/Pac-12 and Big East vs Big 12. Run them all during the same week and you’ll have some big time games. Think of the possibilities with Duke/Michigan State, Arizona/Kentucky, Villanova/Kansas.

8. Transfer rule – I hate that kids have to sit out for a transfer. I’m all for letting kids transfer and be eligible immediately, but this should especially be the case if a coach leaves. If a coach you committed to or played for is fired/takes another job/whatever, you have the right to visit other schools with the ability to recommit to the new coach without any penalty. Let’s stop punishing kids for this sort of stuff and stop pretending players commit to a school over a coach/system.

9. One conference agrees to MAC rules – I’m speaking specifically about playing a weekday afternoon game. The MAC currently owns Tuesday/Wednesday night for football. It’s different, but people know all about it. Let’s say the MAC does this for basketball. Each team plays 1 home game and 1 road game in conference on a weekday afternoon. The conference has teams close enough to where you’re not missing anymore time from school since every place is in Michigan/Indiana/Ohio basically. You’re not giving up a ton as you’re only hosting 1 daytime game and it’s announced with the season so people can plan accordingly. More importantly it gives us some afternoon sweat, which is the best kind of sweat.

10. No more AP/Coaches Top-25 – I hate the polls. The people that vote in them are pretty much clueless when it comes to the sport and don’t even watch games – as they’ve admitted before. Let’s get rid of their worthless polls. Instead the committee should be forced to release rankings similar to what they do in college football. Have it released every week, but make them release a top-25 and use those rankings as those are the ones that ultimately matter. It gives us more transparency as to what the committee is viewing and that’s all everyone asks for in this thing. The release of the top-16 last year was a wonderful thing, let’s have that more often.

11. Speaking of the committee, new members – The committee should not be made up of AD’s. There should be a mix of former players, coaches, media members and AD’s to get a little bit of every voice in there. Get these people together more often and make it a full time gig as the they’ll be releasing rankings and going over games.

12. Make officials full time and get more – Right now half the problem with officiating is the fact these guys are calling 5-6 games a week. They call a game, hop on the plane, travel to wherever and call another one. We need to make officials full time, in the offseason have them going through classes and continuing to improve their calling. Schedule them only to an area – so you have west coast officials, Big 10 officials, etc. Officials can’t call more than 3 games per week so they continue to be fresh. More importantly target former players who are no longer playing to try and get new blood in there. Right now officiating is an old boys club, which is starting to show. Get these guys who played the game and know what players want to be called. Assign them outside of where they played so you take away any bias talk and work on building this up.

13. Gus Johnson back to the NCAA Tournament – I don’t care about TV deals, it’s a national disaster that Gus Johnson isn’t calling NCAA Tournament games. We did the right thing by getting the greatest human alive Bill Raftery calling the Final Four, now let’s get Gus back.