Christmas time in New York City is magical. No other place on earth can you see the tree at Rockefeller Center in the morning, go skating in Central Park in the afternoon, and watch a fat drunkard attack a street Santa at night. I’d like to say I’m surprised, but I’m not. Penn Station is essentially a toilet. It’s a lawless melting pot of scum. You have the homeless, the beggars, the addicts, the drunks. And they’re aggressive. The worst part is it’s not self-contained, they spill out into a three block radius surrounding the station.

Fights happen all the time but this one is special. Not because of the violence, but because of the lack of violence. It’s a Christmas miracle that Santa didn’t haul off and smack that guy to the moon. Being spit on, punched, and flipped off over the course of thirty seconds is grounds for murder. Or at the very least a puncture wound. Which in all fairness probably happened after the camera turned off. He made it very clear he didn’t want to be filmed. 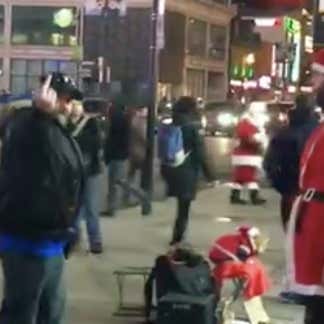 Regardless, I’m surprised more of these videos haven’t popped up. People are ruthless to each other around the holidays. If anyone knows who this Santa is, give him a hug. He deserves some sort of recognition for not killing that guy. And if you’re about to bitch about the lack of a fight, don’t. I got you covered.